The Perfect Example: A Sermon for the First Sunday in Lent

I know this is the sort of thing Bob told you all a million times, but I think you need a quick refresher course on the gospels. For starters, it’s obvious to everybody that the Gospel According to John is very different from the other three. Matthew, Mark, and Luke, on the other hand, share a similar viewpoint— that is, they describe more of the same events in the same order— and so we group them together using a Greek word for common viewpoint and call them the Synoptic Gospels.

Now, of these three, Matthew and Luke seem to have more in common with each other than they do with Mark. For one thing, they’re longer. But on top of that, the material they contain that’s not in Mark seems to come from the same source. But they were written nearly 2000 years ago, and so we have no idea what that source was. But we do have a name for it. And that name isn’t Greek, but German. It’s a two-syllable, six-letter word: Quelle, which just means source. But apparently that’s too long and too hard, so we usually call this lost source by its first letter: Q.

One of the biblical stories where we can see the differences among the gospels is
the one we always read on the First Sunday in Lent, commonly called The Temptation of Christ or The Temptation in the Wilderness. The most glaring difference is found between John and the synoptic gospels. That’s because this story isn’t even found in John. On top of that, when we look at the other three, we’ll see that Matthew and Luke do indeed seem to draw from a different source than Mark does, because they each share some details that Mark lacks. For example, they recount three specific situations that Satan used to tempt Jesus. 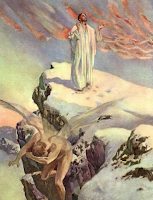 But on top of the forty days in the wilderness, Matthew and Luke make another claim that Mark doesn’t mention, and that is that Jesus actually went without eating for forty days. So there already are two things that we can identify that must have been in Q: the notion that Jesus fasted for forty days, and the specific temptations the devil confronted Jesus with.

The story as Mark tells it in his unique way is a good example of why most scholars believe that Mark is the oldest of the four gospels. It’s very succinct, and as the tradition of Jesus’ temptation in the wilderness aged, it seems more likely that details got added than that they got removed. And so a story that Matthew tells in eleven verses and Luke in thirteen, Mark barely touches upon in two verses.

Oh, but they’re two wonderful verses. And they’re wonderful because there’s nothing about them that we can’t relate to.

First of all, they come right after Jesus’ baptism. He’s just had a religious experience—and remember, John’s baptism was one of repentance—

And the Spirit immediately drove him out into the wilderness. —Mark 6:12

The One who we’re told is perfect nonetheless received John’s baptism of repentance, and he responded as though he really did need to repent.

And if you take the Bible at its word, then we need to admit that Jesus did, in fact, repent. That’s because repentance—called metanoia in the New Testament—is the spiritual act of changing one’s ways. And certainly the change wrought in Jesus at that point is one of the greatest in religious history. We don’t even have to discuss his perfection (either before or after his baptism) to realize that before this, he’d been a carpenter living a settled life in Nazareth. After this, he was a wandering preacher and healer. Before this, there’s no indication that he proclaimed the coming Dominion of God. Afterward, there’s no indication that he ever sawed another board or hammered another nail in his life.

He was baptized and then he was driven by the Holy Spirit into the wilderness, there to experience a conversion from one way of life to another. Instead of the supernatural account of Jesus going forty days without eating and being confronted with the Satan and his visions of greatness, Mark tells the kind of conversion story that is accessible to just about any of us. We may not all have had this experience, but I think it’s something many of us would welcome. We participate in a meaningful ritual—one that causes us to think about who we are, what we need to do to serve God, and how we can best love our neighbor—and then we separate ourselves from the world for a time in order to think and pray and reprioritize.

The next verse is not only a beautiful one, but it’s also evidence that Mark’s source material was probably different from Matthew’s and Luke’s. Here it says that

He was in the wilderness forty days, tempted by Satan… —Mark 6:13a

No reference to fasting here, so we need not obsess about how he could’ve gone forty days with no food. But we are confronted with his temptation, just as we know we would be with our own. We’re also confronted with the answer to one of our favorite questions about the Lord’s Prayer—namely, does God really lead us into temptation? And the answer is a solid yes. God doesn’t do the actual tempting, but it was definitely the Spirit that led Jesus into a position where he would be tempted.

And who among us can deny this reality. We have had a mountaintop experience, and immediately we’re led to think of ourselves as better than others who haven’t had it. Or we have had a close encounter with God, and immediately we’re led to question whether or not it was real. Or we have been given a marvelous blessing, and the temptation to hoard it or keep it to ourselves is almost impossible to resist.

And as down-to-earth as this part of verse 13 is, it’s the second part that is truly unique to Mark and really quite beautiful and symbolic. But before I quote the gospel, I want to quote a living biblical scholar first, because I think something he said can help us place this next part in context. In a book called Who Is Jesus? John Dominic Crossan said,

So keep that in mind when Mark, still talking about Jesus in the wilderness, informs us that

…he was with the wild beasts; and the angels waited on him. —Mark 1:13b

Now, we can take these words and create a whole bunch of new doctrines, turning Jesus into a combination of Dr. Doolittle and Joseph Smith. But if we place them into the context of our own lives, then I think we’d see that what happened here is that Jesus was simply communing with nature, finding peace in the embrace of God.

So what more could we ask for on this First Sunday in Lent than the example of Jesus—an example we not only can follow, but should follow. He participated in a religious ritual and found such meaning in it that he allowed the Spirit of God to lead him toward something more—in this case, a time of getting to know himself and facing the difficulties he was going to be up against if he was going to fulfill the promises he’d made. But in the midst of temptation and thinking about the hard facts of life, he found comfort in nature and he let God minister to him.

This next part isn’t found in the passage we read today, but we all know what happened next: He was true to his religious tradition, he faced the hard stuff, and he was renewed by God and God’s creation. And then he used all this to serve God and love his neighbor. Nothing stopped him, in fact—he loved completely and he served until the end.

Every year we’re given this gift to do as Jesus did. Sometimes we’re too busy trying to take the Bible literally that we’re unable to apply its symbols to who we are, what we’re doing, and what’s going on around us. A literal story is generally for one time and one place and has only one interpretation. But when we allow that story to stand for something more, then it becomes timeless. It becomes ours. The Temptation in the Wilderness is just such a story. Let’s continue down the road to Easter knowing that Christ’s baptism was for us, his temptation was real, and his victory will be ours on Easter morning. So let’s stick to the path that Jesus walked, because now we know, it can be our path, too.