On Selling Ourselves Out

...A Sermon for the Third Sunday in Lent.

Text: Making a whip of cords, he drove all of them out of the temple.
—John 2:15a

The temple was the religious center of the Hebrew universe. And here we see that it had become its commercial center as well. You see, the faithful were required to offer sacrifices at certain times of year, and the temple in Jerusalem was the only place where such sacrifices were allowed. So those who traveled from afar could not bring the animals that were needed over such a long distance. But some enterprising individuals began to conveniently sell sacrificial animals in the temple courtyard—at a tidy profit to themselves, of course.

And there was also a temple tax required of the faithful, but it had to be made in the local currency. [1] Meaning that people who came from places using other currency had to exchange money once they got to Jerusalem. So other enterprising individuals set up money changing stalls in the temple courtyard—and of course they charged a fee to enrich themselves. [2]

And neither should we, of course.
I’m not talking here about raising money for the church in the church. After all, technically the church isn’t a building, it’s a people. The building is just a tool the church uses for prayer and fellowship and outreach. But if we were to allow others to use the church’s property as a way to profit off God’s people, then I think we would do well to study the passages in all four gospels where Jesus cleanses the temple.

On the surface, I suppose, it’s an uncomfortable story: Jesus getting angry enough to act violently (though there is no evidence that he committed battery on any individual… and I don’t believe he did). But an angry Jesus is, to us, pretty uncomfortable. I like to compare this Jesus to me when I have to change a vacuum cleaner bag: It’s not something you see very often, and it’s not a very pretty sight, but you can bet that when it does happen, it was long overdue. [3]

The early church wasn’t nearly as uncomfortable as we are with this Jesus. “Wherever the early Christians entered a town,” Martin Luther King reminded us, “the power structure got disturbed and [the authorities] immediately sought to convict them for being ‘disturbers of the peace’ and ‘outside agitators.’” But their bravery made life better for the weak who were victimized by the strong.

Things are different now. The contemporary church is so often a weak, ineffectual voice with an uncertain sound, [and is too] often the arch supporter of the status quo. Far from being disturbed by the presence of the church, the power structure of the average community is consoled by the church’s silent and often vocal sanction of things as they are. [4] 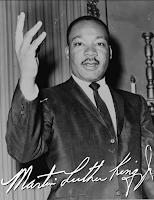 Dr. King’s view of the rôle of the church was a very wise one. He said that the church must be reminded that it is not the master or the servant of the state, but rather the conscience of the state. It must be the guide and the critic of the state, and never its tool. If the church does not recapture its prophetic zeal, it will become an irrelevant social club without moral or spiritual authority. [5]

This is something we need to study, to stick on our refrigerator doors, and to continually remind ourselves of in an era when too many on the one hand advocate for something called “freedom from religion,” while others want use their own religious beliefs to limit the rights of those who disagree with them.

But I don’t want to close this meditation with an indictment of the church, because the church is both more and less than an institution. When talking to a woman who believed that God was to be worshiped on a mountain other than Mount Zion, Jesus said that God’s presence is not limited to a single location, but is found in all who worship in Spirit and in truth. [6]

Within all who yearn for the truth, therefore, is found a priceless sanctuary, a place where God has entrusted some of the greatest treasures in the universe. The treasure within each of us is unique: My gifts are distinct from yours and each of yours is different from those around you. But the church needs each of these gifts if the body of Christ in this place is to be healthy.

And so let’s not sell ourselves short. Our very presence in worship is an irreplaceable offering. But beyond that there is so much that each of us can give and do to build up the church: Talents both known and undiscovered, gifts that are evident to everyone and those that are unseen or in the background.

But if we shouldn’t sell ourselves short, it’s even more important that we not sell ourselves off. In my daily devotions a while back I discovered the most wonderful quote from a sermon that Thomas Boston preached way back in the year of grace 1616: Within that heart of yours, there are buyers and sellers that need to be driven off. [7] And ain’t that the truth? When we don’t appreciate who we are or what our gifts are, we sell ourselves short. But too often, when we do know what we’ve got, we place a For Sale sign on our hearts and hand ourselves over to the highest bidder.

I don’t think God wants our gifts to go to those who can pay the most for them, those who earn them, those who can return tit for tat, favor for favor. God created us, and God has shaken the heavens and the earth to make us who we are. Do we really need to measure what that is in titles or labels or dollar signs?

Brothers and sisters, while it’s true that we may be nothing without God, it’s also true that not one of us is without God. Each of us is something: a beloved child of the Ruler of the universe. And each of us has something: A unique gift that only we can share. Let’s not shortchange the church by imagining that we have nothing to offer. And let’s not shortchange ourselves by sharing our gifts only with those who can return the favor. 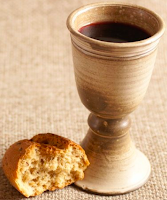 So know this morning that you’re not here by accident. God has called you—not just anybody, but you—to this place. And now that you’re here, God has one more invitation to issue: Take and eat. The table is set with bread and wine, and when we pray over these elements, they become for us the very body and blood of the One who considered us important enough to die for.