The Serpent in the Wilderness


Just as Moses lifted up the serpent in the wilderness, so must the Son of Man be lifted up.
—John 3:14
Introduction: The First Antidote

There are lots of strange stories in the Bible—several of which I wish hadn’t been included. Near the top of that list is the story of the serpent in the wilderness. On the one hand, I don’t like what it says about the wrath of God: The people complained, and God punished them by sending poisonous snakes to kill them. The problem was solved not by removing the snakes, but by fashioning a snake on a pole that people could look at and be healed of their snakebites. So the original antidote wasn’t a potion of some sort that people drank, it was simply a snake on a pole for them to gaze upon.

I. The Serpent in the Wilderness

This story from the Book of Numbers is so strange, that one would hope it would play a minor rôle in theology so that we could conveniently forget about it. But no—in what is arguably the most famous section of the New Testament (the first half of John 3), Just before he said that, “God so loved the world that he gave his only Son, so that everyone who believes in him may not perish but may have eternal life,” Jesus also said that he would be lifted up on the cross in the same way Moses lifted up the serpent in the wilderness.

The theology here is similar to the science of antidotes and vaccinations—at least some of the time: In order to be healed of something, or to resist a disease in the future, you need the actual poison (or virus) in order for your body to create antibodies. The theological side of this is found in Paul’s 2nd Letter to the Corinthians, when he wrote, “For our sake he made him to be sin who knew no sin, so that in him we might become the righteousness of God.”

II. You Always Hurt the One You Love

But perhaps there’s another interpretation. It could be that being confronted by my wrongdoing might actually make me sorry for it and repent of it. In this way, it’s similar to looking at your face in the mirror and seeing a big smudge. Until I saw it, I didn’t know I needed to do something about it. 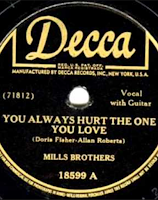 So if faith in the one who is crucified represents knowledge of the sins we’ve committed and salvation from the consequences of that wrongdoing, is there a need to turn that into a doctrine in which God is required to kill God’s own Son in order to save us? Instead, it’s important that we take full responsibility for our own violence. And that can only be accomplished by gazing at the result of our wrongdoing: The fact that someone who came to us in love ended up being nailed to a cross.

The story is repeated over and over again in our lives—it is repeated so often that we’ve even created a cliché about it: You always hurt the one you love. No one can remind us of our shortcomings better than someone we love or someone who loves us. We need such people in our lives to help us discover who we are, and yet we often rebel against the very presence we need. In such self-discovery is healing… if we can accept it with love.

For two thousand years, Christianity has refused to look at the death of Christ with a true sense of responsibility. Rather than seeing in the Crucified One the extent of what can happen if we follow our desire to blame others, we have chosen to see in it a plan of God that even God could not work around. I suspect that we listened to Jesus in the first place and allowed him to help us in our self-discovery because of his teaching and healing. God’s plan for loving the world could have been accomplished just as effectively, I believe, if we had chosen to lift Jesus up by following his teachings about the unconditional nature of love and forgiveness. So was it God’s choice that we instead lifted him up on a cross, or was that our doing?

III. Love is as Strong as Death

The time has come for humanity to quit blaming others for all the wrong we do. It isn’t the serpent which makes us hurt ourselves and others. And God didn’t kill God the Son in order to make us understand the true spirit of God’s love. The Crucified Christ is not an example of God’s demand for blood atonement. It is an example of our demand for a scapegoat. 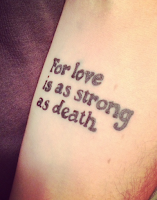 For a lot of people, the doctrine that we call “substitutionary atonement” is something that prevents them from participating in the Christian religion. So I’d like to suggest another possibility: In looking at the cross, perhaps we should see not God’s justice, but rather our own injustice. Healing, salvation, and life are offered to us not by believing in a God who sent God’s Son to die for our sins, but in believing in a God who sent us One to help us to see what separates us from one another and from God—and to overcome those problems through love and forgiveness.

In the Song of Songs, Solomon says (8:6) that Love is as strong as death, and in Proverbs (21:3) he says that To do righteousness and justice is more acceptable to the Lord than sacrifice. Whether or not Solomon actually wrote these words, they come from the same Wisdom tradition, and both verses make the same point: Acting out of love can accomplish at least as much as death can.

In Jesus, God tried to teach us that life wasn’t a zero-sum game. Making our enemies miserable can’t make us happier. Taking vengeance on somebody doesn’t create justice. Bloodshed won’t make us whole. Sharing what we’ve got doesn’t make us poorer. And yet, in the end, this life that taught us how to live was ended in violence and hatred, because we couldn’t accept that justice could be achieved any other way. And in a country that practices mass incarceration—not with the goal of rehabilitating anybody but simply because we like the idea of putting people in prison—and that still allows the death penalty—not because it will accomplish anything other than an individual’s death—it’s easy to see why we can relate so easily to a God whose justice demands death.

Paul certainly encourages this belief. But Jesus seemed to be teaching something else. He taught us how to enter into the Kingdom of God, not through the death of another, but in the way we lived our own lives. That didn’t happen. But certainly in gazing upon the serpent in the wilderness, that is, the Christ of God lifted up on a cross, we should finally be able to see that the King of kings and Lord of lords is also the Death of deaths—that our human idea of justice is so imperfect that it can not only result in the death of a person innocent of the crime they’re accused of, but it can even result in the death of a Person innocent of any crime.

The serpent in the wilderness was a horrible thing on the surface, but it freed the Israelites to live. In the same way, Christ lifted up on the cross (an even more terrible thing) frees us to live. Look to him not to see an excuse for more vengeance, but to see love and service, generosity and the true justice of God.
—©2018 Sam L. Greening, Jr.