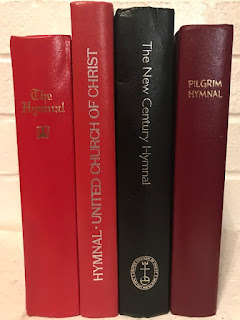 The current hymnal of the United Church of Christ is The New Century Hymnal, published in 1995, which is viewed as rather radical in its use of inclusive language and alternate metaphors for God. This the second hymnal of the denomination, the first being The Hymnal of the United Church of Christ, which was published in 1974. This means that for the first 17 years of the UCC's existence, the hymnals of its predecessor denominations were the only official ones.

These two hymnals were the Pilgrim Hymnal of the Congregational Christian Churches (1931) and The Hymnal of the Evangelical & Reformed Church (1941). Both of these hymnals were very good collections—each an excellent servant of its respective denomination, and in their own way, far better than the 1974 hymnal that replaced them.

This Sunday, I'm going to compare the metaphors we use for God to snapshots, that is, impressions from a particular time and place that cannot completely represent the infinite and eternal nature of the Divine—one such metaphor being God the Father. And since it's also Father's Day, I'm going to eschew the New Century Hymnal in worship and use hymns from the hymnals of our predecessor denominations. From The Hymnal: Father, We Praise Thee Now the Night Is Over (№ 44), and Faith of Our Fathers (№ 282). And from the Pilgrim Hymnal: The Lord's My Shepherd (№ 84), and This is My Father's World (№ 65).

This last one is interesting because there are two endings to the text, each of which is common, depending on the tradition of the hymnal. As it turns out, the Congregational Christians used one ending:
and the E&R Church used the other:
While I am departing from current UCC practice in my hymn choices this Sunday, I felt that the Congregational ending was nonetheless more in keeping with the current theological emphasis of our denomination, and that's why I chose that particular version. It didn't hurt that this was also the text used by the United Methodist Church in which I grew up.