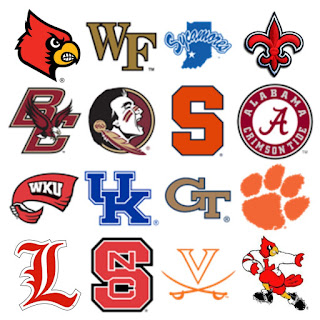 It's 12 days till the start of football season. So, attempting to be as objective as possible, here are the fight songs of Louisville's 12 regular season opponents ranked from best to worst:
⚜⚜⚜
#1.  To prove how objective I'm trying to be, I'm not a fan of the school my Number One belongs to. I really don't like Wake Forest at all, in fact. But I have to admit their fight song's the best of the twelve. It's original, has cool words, and a catchy tune. If this were a ranking of all fight songs nationally, it would definitely be in the Top Ten... maybe even the Top Five. What I'm not fond of, however, is the bridge between stanzas. But I didn't allow that tackiness to lower its ranking. Lesser songs were not so lucky when it came to things having nothing to do with the actual tune.

#2.  Up next is Louisville's FCS opponent this year. I think Indiana State's fight song is a classic. Good tune, solid and unpretentious words: sort of what fight songs are meant to be. For some reason my favorite thing about this song is the way they own their very weird mascot, repeating the word Sycamores whenever it occurs with sort of a staccato which draws even more attention to it.

#3.  Boston College has a good fight song and they know it. Problem is, it's just a little too dignified to be a truly great fight song. But Top Three ain't bad.

⚜⚜⚜
#4.  It's hard to separate the Florida State fight song from it's hype-y fanfare. I really don't like these fraught college fight song intros, and I think FSU's is among the worst. But it seems to be such an integral part of the song now, that I'm allowing it to bring down their score. Not a bad fight song once you get into it, however.

⚜⚜⚜
#5.  Syracuse's Down the Field is a classic. But it's also kinda boring. Nothing at all wrong with it, and it still ranks in the top half. But like I said, it's boring.

⚜⚜⚜
#6.  Alabama's fight song is an example of how lyrics can pull a song's ranking down. I think the tune's pretty good, but the words were written several generations ago and seem irrelevant today. They mention specific opponents, some of whom they no longer play (e.g. the Yellow Jackets, which I assume refers to Georgia Tech), and their big reference is to the Rose Bowl—a game they haven't played in since World War 2. Add to this the unnecessary fanfare that precedes the actual tune, and Yea Alabama barely makes it into the top half.

⚜⚜⚜
#7.  At the top of the bottom half is Western Kentucky. Their fight song is just meh. But at least it's theirs, which is more than I can say about the rest of the songs on this list.

⚜⚜⚜
#8.  About this song I admit that I absolutely cannot be objective. Is Kentucky's fight song original? Yes and no. It's original to the college. But all I hear when I think of it is every high school band in Eastern Kentucky honking out this tune as their team's fight song. (And, let's admit it, it's just darn silly when opposing teams are constantly playing the exact same fight song at each other). And there's something about the tune itself which sounds better suited to a band of kazoos than to actual instruments. So is my opinion objective? No. Can I defend it? Certainly.

⚜⚜⚜
#9.  This fight song, entitled The Ramblin' Wreck of Georgia Tech, would be at or near the top if it were truly Georgia Tech's fight song. But, alas, they borrowed it. It was originally a song called Son of a Gambolier, composed by Charles Ives.  Not only did they borrow the tune, but they stole most of the words, too. But at least the Yellow Jackets had the good sense to choose an obscure song as their fight song. This is more than we can say for the rest of the bottom of the list.

⚜⚜⚜
#10.  Nobody can deny the excitement of Clemson's fight song, the greatness of the official arrangement, or the skill of their band. But Tiger Rag is about as original as Mary Had a Little Lamb. It was famous long before Clemson adopted it, and several other colleges (ones with Tiger mascots, of course) also use it (though at least they have the decency not to make it their principle fight song). Only the aforementioned positives keep it from being ranked #11 or #12.

⚜⚜⚜
#11.  You'd think NC State could've come up with a more original tune than The Army Goes Rolling Along. It's a truly great tune, but it doesn't belong to the Wolfpack. If West Point doesn't use it as their fight song, then certainly NC State has no right to it at all.

⚜⚜⚜
#12.  It's hard to even determine what Virginia's fight song is. They have one called The Cavalier Song, which would rank far higher than #12. But the one that seems nearest and dearest to their otherwise cavalier hearts—the one that moves them to link arms as one and sing loudly after every TD (so, admittedly not as often as they'd like)—is The Good Old Song, the least original of all college songs. The words are not particularly inspiring, but they're not horrible. What's horrible is that they're set to the tune of Auld Lang Syne. You'd think such an elite school could come up with something to call their own... or at least choose a less obvious knock-off.