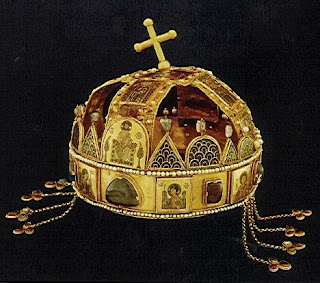 Hungarians trace the foundation of their state to the coronation of Stephen I as king in the year AD 1000. He was the first Christian ruler of Hungary and is considered a saint. The crown placed on his head was sent by Pope Sylvester II. This "Crown of St. Stephen" (or the Holy Crown of Hungary) has been the symbol of Hungary throughout its history, is considered to have personhood, and is the equal of the state itself. As such it is superior to the head upon which it sits, and the kings of Hungary ruled not in their own names, but in the name of the crown. When the crown passed to the Hapsburgs, the Emperor of Austria also became the King of Hungary, and the Empire was known as the dual monarchy of Austria-Hungary. Many Hungarians—especially during the failed revolution of 1848—despised the emperor, but were loyal to the king, even though they were the same person.

At the end of World War 2, the Crown of St. Stephen was brought to America to keep it out of Soviet hands, and was stored in Fort Knox until 1978, when President Carter ordered it returned to Hungary. After the fall of communism, its likeness was returned to Hungary's coat of arms, even though Hungary is officially a republic.

So in honor of Hungary's national holiday, here's a beautiful rendition of A Magyar Himnusz ("The Hungarian Anthem") performed in the Országház (parliament building) in Budapest.