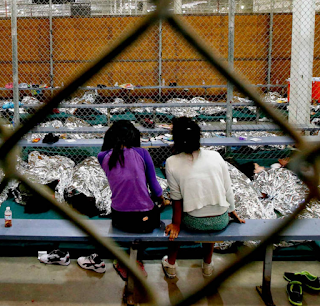 Sing to God, make melody to his Name! Rejoice before him who makes of the heavens a highway—Jah is his Name, and rejoice before him. Father of the fatherless and protector of widows is God in his holy habitation.
⁌Ps 68:4-5⁍


These two verses are among the most telling in the scriptures. They give God's Name quite explicitly—something that is rare by itself. But the sharing of that intimate knowledge is directly connected to what follows—meaning only God's Name is more inherently (if such a word can be used for the Uncreated) a part of God's nature than God's identity as Parent of orphans and the One who gives justice to widows.

Once again I will invoke the Imago Dei, for how can creatures who bear God's Image mistreat children or treat the elderly unfairly, when it is the very nature of God to care for them and defend them. Perhaps I am not worthy to claim God's Image as long as my tax money pays for detention centers for children who've been separated from their parents and for single mothers who are fleeing violence. They, however, are the ones who can claim the Imago Dei. And if they bear the Image of God, then is it wrong of me to picture the holy habitation mentioned in Psalm 68:5 to be a cage administered by ICE? A border detention center filled with mistreated refugees?

When I seek you, O God, help me to look beyond the walls of my church, and beyond my own house, to find you in the unlikeliest of places: the homeless shelter, the detention center, the cross on the hill... Amen.