The Grace of Disgrace

Now all the tax collectors and sinners were coming near to listen to him. And the Pharisees and the scribes were grumbling and saying, “This fellow welcomes sinners and eats with them.” So he told them this parable:

There was a man who had two sons. The younger of them said to his father, "Father, give me the share of the property that will belong to me." So he divided his property between them. A few days later the younger son gathered all he had and traveled to a distant country, and there he squandered his property in dissolute living. When he had spent everything, a severe famine took place throughout that country, and he began to be in need. So he went and hired himself out to one of the citizens of that country, who sent him to his fields to feed the pigs. He would gladly have filled himself with the pods that the pigs were eating; and no one gave him anything. But when he came to himself he said, "How many of my father’s hired hands have bread enough and to spare, but here I am dying of hunger! I will get up and go to my father, and I will say to him, 'Father, I have sinned against heaven and before you; I am no longer worthy to be called your son; treat me like one of your hired hands.'"

So he set off and went to his father. But while he was still far off, his father saw him and was filled with compassion; he ran and put his arms around him and kissed him. Then the son said to him, "Father, I have sinned against heaven and before you; I am no longer worthy to be called your son."

But the father said to his slaves, "Quickly, bring out a robe—the best one—and put it on him; put a ring on his finger and sandals on his feet. And get the fatted calf and kill it, and let us eat and celebrate; for this son of mine was dead and is alive again; he was lost and is found!" And they began to celebrate.

What’s interesting is that the parable we’re looking at today is defined—in English at least—by a word that doesn’t occur in the story at all: Prodigal. Another instance of this is in the Parable of the Good Samaritan.

So let’s go back to the word prodigal. It doesn’t mean lost or wayward it all. It means extravagantly generous to the point of wastefulness. The story isn’t so much the Parable of the Wayward Son as it is the Parable of the Wasteful Son. We might just as easily call it the Parable of the Prodigal Father. Then we’d recall the true meaning, for it’s easy to remember the extravagant generosity of the father who welcomed home his wayward son. 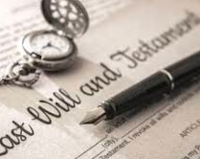 So if the son was prodigal, then that word in the biblical sense must mean more wasteful than generous. It’s the father who was both wasteful and generous. The son appears to be nothing more than a self-centered ingrate who gets tired of waiting for his father to kick the bucket, and so he brazenly asks for his inheritance while dad’s still alive. I’m not sure how such affairs were conducted twenty centuries ago, but in the year 2018, we frown upon such selfishness. And in this story, we look on in a kind of horror tinged with sadness when the father complies, and hands over half his treasure to his spoiled son. I’ve read slightly differing viewpoints on the (ir)regularity of this transaction in respected commentaries. One states that it was not unheard of for a father to divide his estate among his sons while he was still living, but it was advised against. By law, the sons could only enjoy the use of the property—legal title wasn’t theirs while their father was still alive. 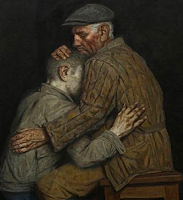 Well, there are many miracles and wonders in the Bible that we have trouble relating to: healings, the parting of seas and rivers, resurrections from the dead, thousands of people being filled up with five loaves and two fish to share among them. But there is no greater miracle in the Bible than the one Jesus recounts in his parable of the lost son and the prodigal father. The wonder of it all is heightened by the fact that we know it’s true. We all know of bitter families where there is no forgiveness. But I think all of us also know of families who have experienced the miracle of forgiveness. I hope some of those families are represented here this morning. There are a lot of problems with the human condition, but the love of a parent for a child is not one of those things. It’s one of those places where the divine image still shines through, because a parent’s first instinct is to forgive—so much so that the parent who refuses to forgive (and there are some) are often considered an aberration. So it’s no wonder that Jesus chooses the father’s forgiveness of his wayward son to describe God’s love for us.

But remember, there were two sons...


Now his elder son was in the field; and when he came and approached the house, he heard music and dancing. He called one of the slaves and asked what was going on. He replied, "Your brother has come, and your father has killed the fatted calf, because he has got him back safe and sound." Then he became angry and refused to go in.

His father came out and began to plead with him. But he answered his father, "Listen! For all these years I have been working like a slave for you, and I have never disobeyed your command; yet you have never given me even a young goat so that I might celebrate with my friends. But when this son of yours came back, who has devoured your property with prostitutes, you killed the fatted calf for him!"

Then the father said to him, "Son, you are always with me, and all that is mine is yours. But we had to celebrate and rejoice, because this brother of yours was dead and has come to life; he was lost and has been found.”
—Luke 15:24-32
Here ends the second part of the New Testament lesson.

And (for many of us, at least) here ends our comfort with the story. The parable of the lost son made us feel good, for many of us could easily relate to the younger son who was in need of grace and was forgiven. Or to the father, who was so open-handed with his love. But when Jesus finishes saying what he has to say, many of us suddenly realize that we’ve missed the point. We’re not intended to identify with the forgiven son or the forgiving father, but with the unforgiving brother. Like the dutiful son, we think we’ve never strayed from the nest: we’ve been serving our father without so much as a pat on the head for all we’ve done. We’ve been “good” Christians since were old enough to know how to spell the word Christian. We attend church. We’ve served on every board or committee known to Protestantism. We pledge to the church. Know at least a dozen hymns by heart—as well as a couple of Bible verses. And we volunteer to help whenever somebody comes up with a concrete suggestion as to how to help (because, let’s admit it, sometimes Jesus’ “as you do unto the least of me” stuff is a bit too nebulous for us).

And in some churches, that’s enough. There are churches out there reserved for the good people. You go to their services, and the preacher always lays it right out in front of you: These are the rules, and those who abide by them are God’s people; those who don’t are, well, liberals. Obviously, we don’t go to one of those churches. We go to a United Church of Christ—a denomination that seems to have little respect for the black-and-white rules other churches love so much. We allow for a lot of gray area… indeed we seem to relish the gray area. By the time we get through reading a summary of what’s happened at one of our synods or wade through the information on the UCC website, we come away with very little sense of who’s an insider and who’s an outsider, who’s good and who’s evil. Indeed, this denomination seems to welcome everybody into the fold: No matter who you are or where you are on life’s journey, you’re welcome here.


And we’re left wondering Why. And yet, even the question Why? Is answered in the parable. And the answer is a simple one. God is sovereign. Just as a frustrated parent sometimes has to answer, Because I said so, that’s why! so God acts in our lives in ways that often make no sense to us. And yet, God’s actions are actions of love—welcoming the wayward, forgiving the unforgivable, pleading with the resentful. Humans have through the ages sought to limit the infinite and find answers to all their questions. So why should the infinity of God’s love be any different? Though God’s forgiveness knows no end, we think we can point to the place where forgiveness stops and perdition begins. Though God would include all people in God’s family, Christians often desperately seek to limit our own faith communities because there are simply people out there whose lives we don’t understand. But please note in today’s parable: it is never we who come to God. It is God who comes to us. The younger son who had disgraced himself through squandering his father’s love couldn’t even make it to the front yard before his father forgave him. And the elder son who had disgraced himself by refusing to enter his own house and acknowledge his brother is met outside by his father, who pleads with him not to be so narrow-minded.


Really, one disgrace is no more disgraceful than the other. If the parable of the lost son and the prodigal father teaches us anything, it should teach us that only God can judge. Those whom God embraces should not be shunned by any of God’s other children. So let’s not make God’s divine love toward us or anybody else into something less than divine—something, even, that’s less than human. For if God is God, then God’s love must be infinitely greater and more understanding than anything we can imagine.