Water into Wine: The Change Within

When the steward tasted the water that had become wine, and did not know where it came from (though the servants who had drawn the water knew), the steward called the bridegroom. 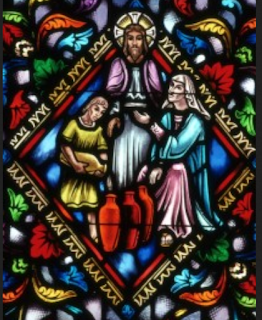 Something gets said in the account of Jesus’ first miracle that sticks out like a sore thumb. It’s when Jesus calls his mother Woman. The wine runs out, and Mary tells Jesus to fix things. His reply? Woman, what concern is that to you and me? Seriously, who talks to their mom that way—and right in front of people?

There are two schools of thought on this topic. Well three really, because one of them is to simply mistranslate it and have Jesus call his mother Mother. [1] But we have to let it stand as it is. And so it’s possible that calling your mother Woman in first century Palestine was simply a term of respect, such as Ma’am.

The second explanation is much more theological. But there might be something to it. It points to a change in Jesus’ relationship with his family. Distancing himself from his mother as he’s beginning his ministry is a clear indication that his focus has changed and his people are no longer just the people he grew up knowing.

Jesus’ answer to Mary was something along the lines of, “We’re not in charge here”— but then, he goes ahead and does what she asked him to. 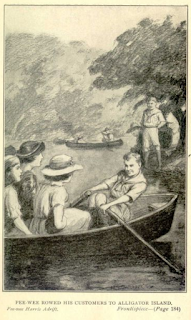 Another thing in this passage that gets a lot of attention might be a little less compelling, but it’s the kind of thing scholars like to talk about. Namely, when and for whom did the water become wine? It’s a question kind of like “How many angels can dance on the head of a pin?” isn’t it? In fact it reminds me of one of the old novels I like to read from the early 1900’s. The one I’m thinking of is juvenile fiction by Percy Keese Fitzhugh. It’s about a boy scout troop in the fictional town of Bridgeboro, New Jersey, and there are quite a few books in this series. This particular one is called Pee-Wee Harris Adrift, and in it Pee-Wee (his real name’s Walter) looks out on the tidal river he’s very familiar with and spies something new: An island that had never been there before. On the island is a lone tree. But the island isn’t stationary; it’s moving upstream with the tide.

And so Pee-Wee manages to get himself onto the island, plants a sign on it as its discoverer, and claims it as his possession. But lo and behold, Pee-Wee quickly finds out that he’s not alone on the island: there’s another boy there, but he hadn’t seen him, because he’s up in the tree, which happens to be an apple tree. The boy’s name is Roland Poland and his friends call him Roly Poly. And this is how he happened to be there:

Roly and his friends were climbing the trees in an orchard on the bend of the river soon after a storm when the river was running swiftly. Where the swift current had undermined the land underneath an apple tree right on the river’s edge, the tree and its whole root system gave way and fell into the river with Roly still in the tree. So naturally, since Roly was on the island before Pee-Wee—in fact, he was on it at the time of the island’s creation—he’s got a point when he says that he’s the true discoverer. But, Pee-Wee points out, when Roly first discovered the island it wasn’t an island yet.

Roly isn’t too bothered by this logic, and by the time his friends show up with camping gear, they’re all glad to meet Pee-Wee and they happily refer to him as The Discoverer for the rest of the story. The question of who discovered Pee-Wee’s island ends up not being important in the end, because the real plot lies in the subsequent adventures Pee-wee and his new friends get up to. [2]

Likewise, the workings of Jesus’ first miracle—especially the precise point in time that it happened—are not really all that important to the plot of John’s gospel. You see, when we dissect the miracles of Jesus, we’re looking for earthly explanations of the workings of the kingdom of heaven. But the real point is that the miracles “point away from earth to a heavenly reality.” [3] I’m not saying we shouldn’t dissect the scriptures, but it’s always important to remember that the beauty of an individual tree is often less than that of an entire forest… details sometimes distract more than they edify.

It’s often enough to know that there “are moments,” as N.T. Wright said, “when, to people who watch with at least a little faith, the angels of God are going up and coming down at the place where Jesus is. They are moments when heaven is opened, when the transforming power of God’s love bursts in to the present world.” [4]

This particular miracle has usually been interpreted as sort of a parable of spiritual transformation. But please note here that those who experience this transformation—those who benefit from its goodness—are, for the most part, people who have no idea who is in their midst. The master of ceremonies knows only that excellent wine unexpectedly appears at a time when the inferior stuff should have been served. The guests—who may not even care at this point, having had their fill of the cheaper stuff—also drink of the wine that—unbeknownst to them—had just been water a few moments earlier. The servants know what happened, as do Jesus’ closest followers (including his mother), but everybody else is clueless. And yet everybody present enjoys the fruits of Jesus’ transforming presence. 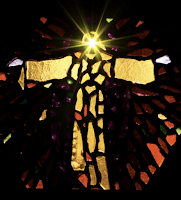 This all happened nearly 2000 years ago, but is there a better metaphor for the place of the church in today’s society? Fewer and fewer people acknowledge any rôle for religion in their lives. And the religion that seems to be most on display—at least in our country—is a Christian church that’s always arguing over minor points of doctrine that outsiders don’t care about, or that’s involved in some sort of scandal, or that has aligned itself with the politics of right-wing nationalism.

No matter what kind of Christian we are, we call ourselves the Body of Christ. And so when the world looks at this body and thinks it’s looking at the face of Christ, it’s often really looking at a single fingerprint—or maybe just a toenail. What the invisible church is doing is something people don’t see. It’s not that they can’t, but it’s simply not what they want to look at, or it’s not what they’re allowed to see. The real face of the body of Christ is turned in a direction that isn’t nearly so interesting to the world, because it doesn’t involve argument or scandal or political grandstanding. No, the real face of the body is shining its transforming light on the lives of people who’ve gotten lost, people who are in need, people nobody else notices because they’re either too meek or too powerless or too poor to matter.

And many of these people—like the guests at that wedding—have no idea where the goodness is coming from. When people enter a church to pray or sing or learn or spend time with other Christians, then, yes, they know. But many of the ways that the church is present with and a servant to the world are ways that don’t draw attention to the religious aspect of the outreach. It’s simple done because people are in need. The recipients of the wine don’t know the weakness of the water from which it came, nor do they know of the transformation that must have occurred before it ended up in their hands. 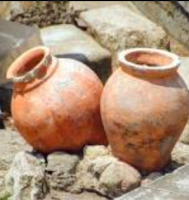 I think Cana’s real message for us comes when we think about where we might see this miracle happening today. Because it does happen, every day in every corner of the world. In fact, I think it’s happening right here and right now. Paul says something that makes me think this when he said that we have the light and the knowledge of God in Christ, but that we have this treasure in earthen vessels, so that it may be made clear that this extraordinary power belongs to God and does not come from us. [5] In other words, we are ordinary people—sort of like those big jars in John 2 that contained nothing more interesting than water. But the presence of Christ transformed what was inside them. It wasn’t a big show, and the vessels remained the same on the outside. But it turns out that what they contained was something special, something that gave life to a party, just as Christ’s followers—usually unacknowledged by all but a few—are at work in our community, our nation, and our world to bring life and joy where once there was discouragement.