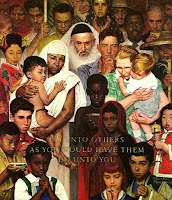 Bring me out of prison, so that I may give thanks to your Name. The righteous will surround me, for you will deal bountifully with me.
✙ Ps. 142:7 ✙

This psalm is supposedly one of David's. And here we find David hiding from Saul and his minions—probably in a cave. David's prayer is clearly heartfelt, and the faith it demonstrates is to be emulated. Had David prayed half as much in his palace as he did in the cave, his later life might not have been plagued by the sin he had to so earnestly repent of.

Though dejected and in a pitiful state, David has faith in Psalm 142 that God's power has not been diminished, nor has God's promise failed. But I
find the final sentence ambiguous—nor does the original Hebrew really clear it up: Is being surrounded by the righteous part of God's bounty? or are the righteous drawn to David by God's bounty?

Whichever interpretation is correct, there's a message in it. If it's the former, then I should appreciate the fact that the community of faith is part of the answer to the prayer I pray daily, Thy kingdom come. The fellowship of the saints is a bit of heaven here on earth. Being part of such a communion is providential, for I need it as I need food, water, and air.

Thank you, Lord, for the righteousness of Christ. May the arms he opened wide on the cross embrace the world in goodness. And now I pray as he taught me...