'The Joy of the Lord Is Your Strength'

God your way, eat the fat and drink sweet wine and send portions of them to those for whom nothing is prepared, for this day is holy to our Lord; and do not be grieved, for the joy of the Lord is your strength. 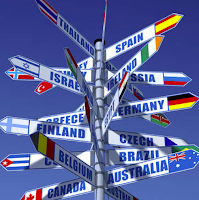 It’s an odd thing living for years in a place where your language and your customs and your religion are different from the majority. There’s always the temptation to be like everybody else. It often means learning a new language in order to live your everyday life. There’s even the chance your children will consider that new language their mother tongue, and their parents’ language to be foreign.

This was Israel in the sixth century before the birth of Christ. They’d lost a war and got carted off to exile in Babylon… that is, until about seventy years later when Babylon in turn lost a war to Persia. It was then that the Persians allowed Israel to return to their homeland with Nehemiah as their governor and Ezra as their religious leader.


But exile doesn’t always mean a loss of identity. it’s also a time of noticing the ways that you’re different. And though I think there was some assimilation, Israel kept enough of its old customs to realize that they were a people distinct from the Babylonians.

One of the important ways we know this is that the completion of the first five books of the Hebrew Bible dates from the period of the Babylonian Exile. These books are known variously as Torah, the Pentateuch, or, simply, the Law. And though they were edited into their present form in Babylon, the material they contain is much older. The exiles had all heard bits and pieces of their own history, but nobody had heard the whole story from start to finish.

And that’s really the best I can do this morning to bring us up to date on the passage I read to you a little bit earlier. The Book of Nehemiah tells us that all the settlers of Jerusalem and the surrounding towns gathered in front of one of the city’s gates, and they did something at the very beginning of that reading that you might not have noticed, but which is very important to what is happening here today—the day that this congregation has brought in a pastoral candidate to preach to you. What happened in Jerusalem in Nehemiah 8, we’re told very matter-of-factly, was that the people told Ezra the Scribe to bring the Torah. 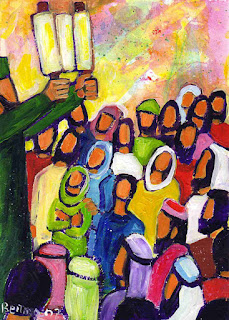 This is not actually what we should have expected. We should have read that their governor, Nehemiah, ordered the people to gather and listen as one of their leaders laid down the Law. Or that Ezra the Scribe, once he had all those people in front of him, ordered them to keep silence while he read to them the sacred words of the Torah. But that’s not what happened. Nehemiah specifically says that it was the people who said to their clergyman: “Bring us the word.” It reminds me of the place in John’s gospel where some Gentiles came to Philip and said, “Sir, we would see Jesus.” So whether it’s the Old or New Testament, it appears that the Bible isn’t nearly as top-down as we often believe it to be—and even sometimes want it to be. There are places in the scriptures where the most meaningful growth comes about when people decide for themselves what they need. And so it is with the way Disciples and UCC congregations call a pastor: An appointed committee chooses a candidate, and the congregations says “Sir (or Ma’am), we would see Jesus; bring us the word.”

So Ezra brought the word. And he read it and explained it. And it took him from early morning till noon. But the people listened. In fact they couldn’t get enough. And it says that they wept when they heard it for the first time.

I had a little trouble wrapping my mind around this at first. But let’s imagine that we were born and raised in a place where we didn’t belong. And that our families observed customs that were different from all our friends’ families. And that we didn’t go to the same kind of church as the majority. And though we always knew we were different, we never really knew why. It reminds me of a commercial I used to see on TV for one of those DNA testing companies. The guy in the commercial said that growing up, he’d always been told he was of German extraction, and so his parents had him wearing Lederhosen and taking German dance lessons. But when he had his DNA tested, he discovered that he wasn’t German at all, but mostly Scottish. And so he traded in his Lederhosen for a kilt.
Well, our story this morning happened over 2500 years ago, and so there was no DNA testing. But the Torah was still able to tell them who they were. “Ah, so that’s why we ate different foods from our Babylonian neighbors,” they realized when Ezra read them their story. And “this is why we dress differently,” and “this is why we wear our hair differently.” We read the strange laws and rules in that part of the Bible, and it’s lost on us. Why does God care about such silly things? we might ask ourselves. But the people in today’s passage listened to those same words and they heard the story of who they were and why they did the things they did.

Maybe that’s why they wept when they heard their own story told to them from beginning to end. It would indeed be moving to have all your customs explained to you for the first time. But the bigger reason to weep was finding out who your God really was, and to hear the stories of what God had done for you, to be told all that God had asked of your people that you didn’t even know about, and to finally realize all the ways that you had turned your back on the One who created you and redeemed you from captivity—not once, but now twice.

So ancient Israel was not so different from us. We, too, want to know who we are and where we came from. And we, too, can be moved to tears when we hear our own story for the first time, or when we realize that we have caused pain without meaning to. But Ezra didn’t want the people wallowing in their sadness. This day was special. It marked a new beginning. And so he said not to weep or mourn, but to go home and feast, and to share their bounty with those who didn’t have enough. But, he repeated, enough with the weeping and mourning, for “the joy of the Lord is your strength.” 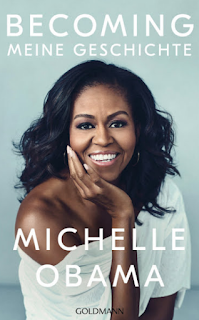 I read a famous woman’s biography recently, and she told the story of her piano lessons. Her aunt was her teacher, and it was her aunt’s very old piano that she also practiced on. This piano was so old that the keys on it were chipped and cracked. And as a little child, she could always identify middle C because of the way the corner of that particular key had broken off. When the day of her first piano recital arrived, her aunt had reserved a room in a community center for the event, and in that room was a brand new piano with perfect keys. And though she knew the piece she’d be performing in front of all those people very well, when she sat down to play, she was paralyzed. She discovered that she couldn’t find middle C, because none of the keys were broken. Realizing what was wrong, her aunt came to the rescue and pointed out the note that she needed to find in order to move forward with her piece.

I think Ezra might have realized that though Israel had finally found themselves, they only knew where they were because of a flaw. They were in danger of seeing their mistakes as central to their identity, sort of like only knowing where middle C is on a keyboard because of a chipped piece of ivory. So, “Don’t grieve,” Ezra said: “You are not your mistakes. Don’t wallow in your own guilt—there’s no strength for your journey in that. It’s in the joy of the Lord that you will find your source of strength.

Sadness and judgment and grief may be temporary stopping places along our journey in life, but none of those are the place where God wants us to end up. When Israel went home after being away for so long, they were tempted to concentrate on their sadness, and to wallow in their guilt. But Nehemiah 8:10 tells us that the message they ended up hearing was one of joy. 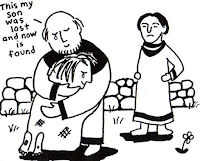 When Jesus told parables about being found or coming home, he also talked about sadness being transformed into joy. Whether it was a lost coin or a lost sheep or a lost child, when what was lost was restored to its rightful place, there was rejoicing. And those who rejoiced ranged from a widow to a shepherd to a loving father to a whole neighborhood to the angels in heaven and even to the very God of all that is. The only character in any of these stories who refrained from joy was the one who preferred to stand in judgment because his little brother was not being required to wallow in guilt.

Whether we’re the ones who are sad or the ones who judge, sometimes it feels like you can’t get there from here, doesn’t it? We, too, can get waylaid along our journey through life, or we can be overly critical of those who’ve found their way home. So what can bridge the gap from sorrow to joy, from judgment to grace, or from grief to gladness? And the answer, I think, is gratitude. Gratitude can bridge the gap between many emotions. In Colossians, Paul writes that it even bridges the gap between complaining and forgiving, and from indifference to love.

Through gratitude for the struggles that got us up the mountain we had to climb, for the life of one who has died, or for the love that overcame our wrongdoing, we can arrive at what Ezra called the “joy of the Lord”—a deep joy, sometimes even a solemn joy that’s very different from giddiness or even happiness. In Israel’s case, gratitude for the shared experience of exile and the identity that was forged in Babylon allowed them to say in Psalm 126, “When the Lord restored the fortunes of Zion, we were like those who dream. Then our mouth was filled with laughter, and our tongue with shouts of joy; then it was said among the nations, ‘The Lord has done great things for them.’ The Lord has done great things for us, and we rejoiced.”