You shall drink from the wadi, and I have commanded the ravens to feed you there.

The ravens owed God a favor. A few hundred years earlier, when Moses was laying down the Law to the Israelites, God had put it into his head to declare some animals clean, and some animals unclean. Clean animals were those whose meat the Israelites could eat. Unclean animals were those whose meat they were forbidden to eat. There were all kinds of categories and virtually every animal found in that part of the world was covered by these dietary rules—the fish of the sea, the animals on the land, and the birds of the air. Among the birds of the air which the Israelites were forbidden to eat were, you got it, the ravens. It actually should come as no surprise that ravens were declared unclean according to the Law of Moses. They were, after all, predators, and predatory animals were almost never considered kosher. But ravens would have been considered especially unclean, for they also ate carrion.

Did it bother the ravens that God declared them unclean? Not in the least. Ravens have never been particularly concerned with what others thought of them—and the fact that neither God nor God’s chosen human beings approved of their diet didn’t bother them in the least. The way they looked at it, “If what we eat keeps us from being eaten, then what do we care if we’re labeled ‘unclean’?”

But just because ravens are indifferent, don’t let it be said that they lack any sense of appreciation. They owed God a favor, and they knew it. But what could a raven do for the Almighty?

Their services were going to be needed in a big way, but they just didn’t connect the dots until God actually called on them. You see, things started getting pretty sketchy in the northern kingdom of Israel after it split off from Judah in the south. Since the temple in Jerusalem was now in a foreign country, it became acceptable once again to build altars in other high places and make sacrifices there to the one God. This caused religion to be more a matter of personal taste, and it wasn’t long before the Israelites started mixing their sacrifices to the God of Israel with sacrifices to the old gods of the Canaanite religion. The most popular of these was a storm god named Baal. And since Baal was in charge of rain, he was associated with all sorts of fertility. Things got so bad that the king of Israel—Ahab was his name—allowed a temple to Baal to be built right in the capital—a city called Samaria. You may have heard of Ahab. But you’ve certainly heard of his wife. Her name was Jezebel, and she no longer even pretended to worship the God of Israel. Alongside Ahab and Jezebel was a man from the little town of Thisby named Elijah. Elijah had begun to notice that the people around him were experimenting. When they thought their God wasn’t answering their prayers like they wanted God to, they tried sacrificing to Baal. And every once in a while, these sacrifices got the desired result. So they decided that they could be a people who could switch back and forth between gods in order to cover all the bases. And that’s how people started to worship Baal as much as they worshiped Yahweh.

Elijah was scandalized by what he was seeing. Did these people honestly think that just because they sacrificed a goat or a couple of pigeons to Baal that Baal actually had the power to make it rain? If somebody didn’t do something, and fast, this New Age fertility cult was going to replace the Old-Time Religion completely! And so Elijah left his little town and headed to the capital to tell the one person who could do something about the situation: King Ahab.

Of course, what he found there was not a bunch of urban dwellers who lived in ignorance of what was going on in the countryside, but the actual ringleaders of this unfaithfulness. The king and queen were encouraging people to thank Baal when it rained, so it was at that point that Elijah felt the Holy Spirit fill him, and he knew what he had to say. “You think it’s Baal and not Yahweh who’s causing it to rain, do you?” he shouted at the king. “You think the God of Israel isn’t real, and the storm god of the Canaanites is? Well God is alive, and as Yahweh, the God of Israel, lives, I’m telling you that it’s going to be years before another drop of rain falls on this country!”

Ahab was angry and Jezebel was frothing at the mouth. So Elijah did what any intelligent prophet would do: he skedaddled. But he didn’t go back to Thisby. The Holy Spirit led him instead into the desert and told him to settle next to a brook called the Cherith, from which he’d be able to drink.

He set up his tent there that first evening, and prayed that God would provide food. But the next morning, he awoke hungry, and no fish had appeared in the stream for him to catch, and there were no rabbits standing around waiting to be caught. All he saw was a lone raven. Since ravens were common enough, this didn’t seem all that interesting. But this one seemed interested in him, which made Elijah uncomfortable. He didn’t want to be reminded how close he was to being carrion himself, so he tried to get rid of it, unaware that he wasn’t the only creature in those parts who’d been getting messages from God lately.

Since ravens are used to having rocks thrown at them, it deftly dodged Elijah’s missiles. And instead of flying away, it landed on the ground much closer to him than ravens normally would. And now Elijah noticed that it was carrying meat in its beak.

This was too much for Elijah. “Why is this unclean bird bringing its dirty meat near me?” he wondered; “God only knows where that came from!”

And he was right; God did know. The meat had come from a nearby farm. God had sent the raven there to bring it to the prophet—much to the raven’s dismay. “What am I to you, O God?” the raven croaked, “a lowly dog trained to play fetch for you and your beloved prophet?”

“Remember, you owe me a favor,” said God, who then showed the raven and just about every one of its relatives where they could find meat and bread on all the surrounding farms.

“This is great!” they said. “We’ll never go hungry again! This is the best food we’ve ever had!”

“But it’s not for you,” said God. “It’s for the prophet camped out down by the brook.”

“Why should we feed the prophet this good food, when we have to eat what’s left after the lion’s had his fill?”

“But there are lots of lions, and they never eat everything they kill,” said God. “You never go hungry. In fact, you have more food than ever when times get rough for everyone else. And besides, since when are you so picky about what you put in your mouth? I’ve so ordered the world that you can eat just about anything, but humans can’t touch you. You’ve had it good for centuries. Why can’t you now serve me?”

And so the raven, his family, and his friends complied. And every time they got close to Elijah he tried to kill them. And every time he tried, they successfully evaded his sticks and stones. Finally, after a few days of these ravens bringing food to Elijah and leaving it as close to him as they dared get—every morning and every evening, fresh flatbread and fresh meat—Elijah finally figured out what was going on. God was sending the ravens. The God of life was sending the bird of death to keep him alive. “Over my dead body will that food stay anywhere near my tent!” he cried aloud to God. But silently the Spirit of God said to Elijah, “Over your dead body? No, things won’t need to get that far.”

And indeed, after a week with no food and only muddy water from the brook, Elijah finally decided that he didn’t want to die. If the Name of God was to be honored in Israel, then God needed him alive so he could fulfill his calling. So in the heat of the afternoon he went to the place where the last ravens had left food behind earlier that morning. And he found what appeared to be some lamb, and a small loaf of flat bread (by now a bit stale). He stoked up his little fire, cooked the meat—burned it is more like it, so detestable did he find the idea of eating something that had been in a carrion bird’s mouth—and ate as much as he could stomach. And he watched for the birds, those unclean ravens, who every morning and evening arrived with provisions from God.

Since the Brook Cherith was created by recent rainfall, his countrymen believed it was sent by Baal. And after a while, it dried up. But the food that Elijah’s God provided never ran out. Israel’s God could provide… Baal could not.

Elijah moved on from there and did as directed by God. But the message of the ravens stayed with him—the message that God could and would provide, just not always in the way he expected—sometimes not even in ways he found acceptable. 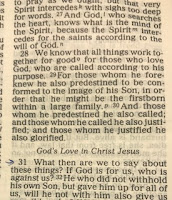 And so it is with us. We pray to God, but we have preconceived notions of what God’s answer should be and what answer we’ll accept. “I won’t take No for an answer,” we often say to each other. But sometimes No is God’s answer. And sometimes God’s Yes seems worse than a No. But that doesn’t mean that God didn’t answer, or that God’s answer is wrong. We just haven’t yet reached the point where it makes sense to us. But all things do work together for good for those who love God, and are called according to his purpose [Rom. 8:28].

So as we remind ourselves that God loves us and will provide for us, let’s not forget the message of the ravens. In this morning’s Gospel reading when Jesus was told he was being called away from his work by his mother and brothers, he looked at the poor and the hungry and the sick who surrounded him and answered, “Here are my mother and my brothers! Whoever does the will of God is my brother and sister and mother.” Jesus’ family were his own people, and these strangers were his ravens. But as far as he was concerned, they and he could do the will of God together. It didn’t mean that he was excluding his family. It only meant that he was expanding the definition of family.

Let’s remember the ravens and the prophet who wasn’t too pure to let them feed him. Who will nurture us—even those of us who think ourselves too good to need other people? And even if we think the opposite is true—that we’re unworthy to serve God—who is waiting for us to minister Christ’s love to them?