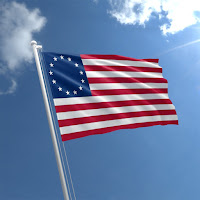 Back before we had an official national anthem, one of the main candidates for the unofficial honor was a song called Chester, written by William Billings in 1770 as a psalm tune. Later, Billings penned other words to go with the tune, and it's this newer one that became the most popular patriotic song in America soon after independence. Though it is little known today, it is an excellent example of early American music, and is much more representative of the new nation that "was brought forth upon this continent" than The Star-Spangled Banner could ever dream of being.

So Happy Independence Day! from William Billings and our ancestors. This is what they'd have been singing on July 4, 1780.


❧ Let tyrants shake their iron rod,
and slavery clank her galling chains,
we fear them not, we trust in God—
New England's God forever reigns.

❧ Howe and Burgoyne and Clinton, too,
with Prescot and Cornwallis joined,
together plot our overthrow,
in one infernal league combined.

❧ When God inspired us for the fight,
their ranks were broke, their lines were forced,
their ships were shattered in our sight,
or swiftly driven from our coast.

❧ The foe comes on with haughty stride;
our troops advance with martial noise,
their veterans flee before our youth,
and generals yield to beardless boys.

❧ What grateful offering shall we bring?
What shall we render to the Lord?
Loud hallelujahs let us sing,
and praise his Name on every chord.