Teach Us to Pray, Part 4 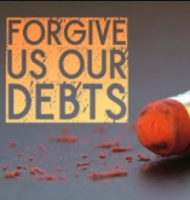 For a few weeks now, I’ve been looking at the Lord’s Prayer in my sermons, and today we’re going to study the very important words, “Forgive us our debts as we forgive our debtors.” The first thing we debts, while our Methodist and Episcopal and Roman Catholic brothers and sisters say trespasses. This is mostly because the first Anglican prayer book was published before there was a widely used English Bible, and the translation that prayer book was working from used trespasses instead of debts. Once the Geneva and King James Bibles came out, those who wanted nothing to do with the prayer book began using the biblical version of the prayer. Thus, to this day, some say trespasses, and some say debts, while others simplify matters by saying sins.
might wonder about is why we say

Debts is by far the most common—and probably the most accurate—translation of the Greek word here. It’s a reminder, I think, of the seriousness of what’s involved—how something negative is created when we hurt somebody else,
That’s why we say I owe you an apology, or you owe me an apology. Even if it’s only partial payment, that apology is legal tender when it comes to the debt involved.

When I think about this, my mind is drawn to one particular situation from a church I served for nearly 12 years. A person became involved in the church, and I felt it was my job to encourage them. Others saw the situation for what it was much sooner than I did, But eventually it came back to bite me. This person was very demanding of others, but never grateful. I didn’t realize the ugly things they’d said to people who didn’t deserve it. It wasn’t until this person admitted to me that they’d taken money from a collection jar intended for the needy that I realized how bad things were. I insisted they return the money immediately, but it took several months before it was paid back. And as difficult as all these situations were, the guilty party always responded with one of two things: 1. 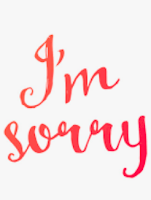 This second one was particularly galling, since no one had ever said they weren’t welcome— only that lying and stealing were not welcome.

But it was the lack of the words “I’m sorry” which were the real culprit. A debt had been created through intentional dishonesty, and the principle payment required was an apology. I don’t think it was ever forthcoming.

I wouldn’t be surprised if everyone in this room has experienced something similar. And it’s the acknowledgment of the debt owed that can often get in the way forgiveness of the debt. And that’s a question for the ages: Can sin truly be forgiven if there’s no repentance—that is, can an unacknowledged debt be wiped away?

I think most scriptural evidence seems to require that acknowledgment. But not all of it. In fact, in most of the stories where Jesus forgives sin, he does it with no specific acknowledgment of sin. Today’s healing story is a good example. A man is brought to him for bodily healing, but Jesus responds by forgiving his sin. Only later—to help demonstrate that his is the power of God to both heal and forgive— does Jesus tell him to get up and walk. The main question for the legalists was obvious, however: Who gave Jesus the authority to forgive? Jesus’ question was just as important: Why does it seem to some to be easier to heal a broken body than to forgive a broken spirit?

This authority to forgive that Jesus gave the church, therefore, is an enormous power, and one that we do not take seriously enough. Here in the Lord’s Prayer, Jesus seems to go so far as to tell us that unless we are willing to forgive our brothers and sisters, we ought not bother Our Father with requests for our own forgiveness: Forgive us our debts as we forgive our debtors. Being forgiven, freed, and made whole was, in fact, the basis for the existence of the early church.

“Having received God’s forgiveness themselves, [early Christians] were to practice it among themselves. Not to do so would mean they hadn’t grasped what was going on.” [If somebody refused to forgive, they might as well have said that they didn’t believe the Kingdom was among them, for they didn’t believe in on of its major tenets.] “Failure to forgive one another wasn’t a matter of failing to live up to a new bit of moral teaching. It was cutting off the branch you were sitting on… if you didn’t live forgiveness, you were denying the very basis of your own new existence.”

—N.T. Wright, The Lord and His Prayer 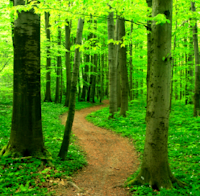 Forgiveness is difficult, and far more difficult for some than others. Some have been victims of horrible wrongs. Often, those debts have gone unacknowledged. If you’re such a person, to reach a point of forgiveness in your life is a miracle greater than a physical healing. I’ll not judge someone who has not reached a point I’ve never been called on to reach, myself, but I will say this: Forgiveness doesn’t mean we have to be in direct relationship with the forgiven if that relationship is harmful. I might forgive someone who’s stolen from me. But I don’t need to then give them custody of my wallet. I might forgive someone who’s hit me, but I am within my rights to keep them at arm’s length. Forgiveness is what’s in my heart— it’s wiping away a debt that is not only owed by someone else, but the presence of which in my life is a constant reminder of something hurtful. To pray in the Lord’s Prayer, Forgive us our debts as we forgive our debtors, therefore, is a prayer for wholeness. And the burden of the debt in the Kingdom is not borne by one alone. We say “us” and “our” because— just as at the beginning of the prayer—we are not alone. When one is not yet able to forgive a wrong, the rest of us are there: listening, helping, acknowledging a truth, and forgiving where possible.

And so the request to ask God for forgiveness is—in my mind at least— accompanied by the need to listen to one another’s stories, to accompany each other on the pilgrim path, and to pray for wholeness of body and soul— a miracle of truly biblical proportions.