Teach Us to Pray, Part 5

Today’s the last sermon in my series on the Lord’s Prayer, and in a way, I’ve saved the best for last. Not the best sermon, I don’t suppose. But the topic might be the most interesting.

We covered a lot of common questions last month:

But all of those pale in comparison to the question that the final petition of the Lord’s Prayer raises, because that question strikes at the very nature of God.

Perhaps you’ve asked yourself why we ask God not to lead us into temptation, when you’ve always heard that the devil was the tempter, and not God. If so, you’re not alone. Pope Francis apparently asked himself the same question. The result? Catholics will soon be praying during mass not to fall into temptation.

I have to admit that I don’t agree with this change. When we look at what the original Greek says in the version of the Lord’s Prayer we pray— the one found in Matthew 6— we see that that’s not really a possible translation. The contemporary New Revised Standard Version that I usually read from translates it as, Do not bring us to the time of trial, but rescue us from the evil one. I don’t agree with that translation, either. I think the best translation might be, Don’t put us to the test, but save us from the wicked. And remember the wicked one might be the devil, or it might be another human being.

But the angle at which I’m entering this verse isn’t the nature of God. My opinion of what God might or might not do isn’t as important as what the scriptures say on the subject… and remember what happened in the chapter directly before the beginning of the Sermon on the Mount? Jesus wasn’t led but driven into the temptation in the wilderness by none other than the Holy Spirit.

And temptations, as we all know, are inherently evil. Except that’s not really true. The temptations Jesus faced were basically three Bible verses— in other words, Jesus was tempted to selfishly interpret scripture for his own gain. And scripture is basically good — to deny that is to deny our faith. It’s the misuse of scripture that is bad. And so it is with all temptation. God’s gifts are good. It’s the misuse of them that’s bad. And so when we pray not to be led into temptation— or not to be put to the test— we’re praying to use God’s gifts the right way.

This is the reason I chose the reading from 1 Timothy 6 this morning. We’ve probably all heard a verse of this passage misquoted, with part of it being left out: Money is the root of all evil, instead of The love of money is the root of all evil. Most of us also probably consider having enough money to be a blessing— not because of the money itself, but because of what it provides. So it makes sense not to see money as evil, but the misuse of it—that is, greed, as a sin.

We’re not sure who wrote the First Letter to Timothy, but—in this point at least—it seems to agree with Jesus. We can start with what we prayed closer to the beginning of the Lord’s Prayer: Give us this day our daily bread. Just as the manna in the wilderness was provided on a daily basis and could not be stored up, Jesus instructed us to pray one day at a time. To hoard or to ask for more, apparently, is greed. And of all the things that Jesus might have pointed out as sinful, greed appears to have been his pet peeve. In the same chapter as the Lord’s Prayer, Jesus told us we cannot serve God and wealth.

In Luke, in the chapter following that other version of the Lord’s Prayer, Jesus also said to take care! Be on your guard against all kinds of greed; for one’s life does not consist in the abundance of possessions. 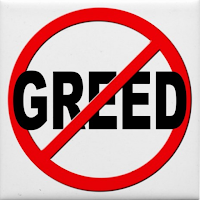 So the petition, Lead us not into temptation, is a complement to the earlier petition, Give us this day our daily bread. One asks for enough, and the other adds, and no more. So it’s okay to ask God not to put us to the test. You’re not accusing God of anything untoward, let along confusing God with the devil. Jesus knew what he was doing when he taught us to pray this. You’re acknowledging that it’s possible to misuse any of God’s blessings, turning them from something good into something dangerous. We pray the actual Lord’s Prayer regularly. But remember—it’s also a model for our own prayers. So when we get to this part, this is where we ask God not to give us so much money that we get greedy, not to give us so much to eat that we become gluttons, not to make us so gorgeous that we become vain, and the list goes on and on.

So be careful what you pray for. The Lord’s Prayer is filled with wise traps that place us in a new family, under a new ruler, asking for a day-to-day existence, and begging God not to tempt us with too many blessings. The Lord’s Prayer is about the kind of life we’re asking to live. Pray it slowly. Pray it thoughtfully. And let it shape your own communication with the One who taught it to us.