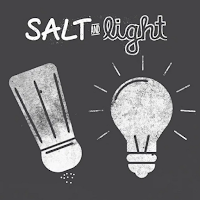 Today’s scripture reading is the part of the Sermon on the Mount that comes right after the Beatitudes— Jesus’ blessings that I talked about in last week’s sermon. In the verses I shared with you this morning, Jesus talks about two things: Salt and light.

They’re the very ones upon whom he just pronounced his blessings: the poor, the meek, the sad, the persecuted. It’s to them, not to the saints or the wealthy or the respected that Jesus said, “You are the salt of the earth,” and “You are the light of the world.”

We still say about good people, “They’re the salt of the earth,” but I’m not sure we know why we say it. We’re quoting Jesus, of course. But what did he mean?

Certainly salt used to be a lot more important than it is today. It was necessary for survival in the old days before refrigerator and freezers. It was just about the only way people could preserve food. That’s why so many of the world’s most ancient cities were built near salt mines.

I spent a day in a salt mine once. Back in 2013 when I took my sabbatical, I spent much of it in Transylvania. I suppose that may sound strange, but the Hungarian Reformed Church is part of the United Church of Christ in this country, and the Hungarian Reformed is one of the main churches in Transylvania. So there’s the connection. Anyway, while visiting a tiny town in Transylvania called Parajd, I signed up for a tour of that area’s main attraction: a salt mine. To get to the entrance, we took a bus. And I thought it was very odd that as the bus filled with people, lots of people were bringing their kids. But stranger than that was that all the kids seemed to be bringing their toys— sometimes large toys, like tricycles. I thought, “Why not let your kids just ride their tricycles at home?”

When the bus took off, it entered a huge cavern entrance and went down a narrow road for what seemed like hundreds of feet. Then we were let off the bus And climbed down what seemed like a million narrow steps. But once we got to the bottom, the space opened up, and we found ourselves in an enormous cavern. The ceiling towered above us and the rooms seemed as big as stadiums. And all the surfaces—floors, walls, and ceilings, were made of smooth salt. But they weren’t desolate. They were well lit and cheerful. And there were restaurants and wine bars, a large playgrounds—a little amusement park, really—and even a church. 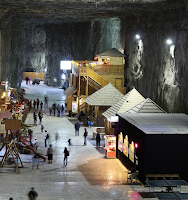 I got there in time for the daily chapel service, and found out that different churches took turns: Since the town was almost all Hungarian-speaking, the chapel service alternated among the Roman Catholic, Hungarian Reformed, and Unitarian churches. But since we were in Romania, one day a week was also reserved for the Romanian Orthodox clergy. Since that day, a Hungarian Reformed pastor was leading the service, I stayed for worship. I didn’t understand much, but I certainly felt God’s presence down there in that salt mine.

But what was the reason for all this? Well, I quickly found out that the children weren’t going down into those caves as tourists. They were going down there for healing. Apparently the air in the salt mines is good for kids with allergies and respiratory problems. And so all the stuff I experienced— the restaurants, the chapel, the playground— was built not to entertain tourists like me, but to serve the sick kids and their families.

Most of us take salt for granted. We know it brings out the flavor in a lot of the food we eat. But we no longer need it as a preservative. And few of us ever think of it as something that heals our children— in fact, we’re told to avoid too much of it for health reasons.

But when Jesus tells us that we’re the salt of the earth, perhaps he was talking about those very qualities that we’ve forgotten. Salt can make life better. It can even heal. So he’s telling us not to lose our saltiness. If we do, not only will we suffer, but so will those around us.

The expression, “You are the light of the world,” is a lot easier to understand. This aspect of life hasn’t changed much over the centuries. We still need light to show us the way. So obviously Jesus is telling the people he’s talking to that they have the ability — the responsibility, really — to guide others.

Here, I think, is where the Scouts might come in. Does anybody here remember last year when I preached a sermon using a kid named Pee Wee Harris as an illustration? Pee Wee was a Boy Scout from Bridgeboro, New Jersey, and he came from the pages of books about Boy Scouts written a hundred years ago by a man named Percy Keese Fitzhugh. Fitzhugh wrote about a lot of Boy Scouts, but my favorite character of his was a boy named Tom Slade.

There are about ten Tom Slade books, and in all of them, Tom is a quiet hero. But in the first one, we see that that wasn’t always the case. Tom came from the worst kind of background. His mother had died, and his father both neglected and abused him. It should come as no surprise that Tom was what we might call a juvenile delinquent.

But he caught the attention of the local scoutmaster, who introduced him to some boys in the troop. Tom couldn’t figure out what the point of any of this was, since none of the boys from the right side of the tracks could possibly like him. But they did. They saw in him something he couldn’t see himself, and they guided him in the right direction— not by telling him how he should act, but by simply being his friend.

It’s probably the perfect example of what Jesus meant when he told us, “You are the light of the world.” And please notice: Jesus never told us to be the light of the world or the salt of the earth. It wasn’t a commandment. It was a statement of fact. When he said not to lose your saltiness and not to hide your light under a bushel basket, I think he was telling us not to forget who we are and not to hide who we are. Because the person you are (or I am) is the person God wants to use to heal and to guide others. And that’s really the long and the short of today’s message. We may think we’re nobodies— too young or too old, too weak, too ignorant, too shy, too gormless— but each of us is the person God made us to be. So don’t forget who you are and don’t hide who you are. Somebody out there (or in here) needs you.