I remember as a kid reading an article in the Ashland Daily Independent (my hometown newspaper) about a place called Beckham County. This had reïnforced a story my grandmother had once told me about this ghost of a place. I'm not sure she told me its name—only that Olive Hill, the second-biggest town in Carter County (the county in which my mother was born) was briefly a county seat. She may or may not have gone into much detail. I don't remember. But I do remember specifically reading with a great deal of interest the newspaper article about the life and death of Beckham County years later.

In sheer number of counties, Kentucky ranks third in the nation. Texas ranks first with 254 counties, but the average size is over a thousand square miles. Next comes Georgia with 159, with the average county having 373 square miles. So to say that Kentucky's counties are small is putting it mildly. In fact, my home county (Boyd) is less than 160 square miles, and there are five counties that are even smaller.

So one of the things included in the 1891 constitution was a set of criteria for the creation of new counties. Here are some of the rules: 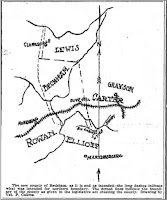 New rules do not always conquer old desires, however, and the people of Olive Hill continued to chafe under the hegemony of distant Grayson—almost 15 miles away!—the seat of Carter County. So they convinced the General Assembly in Frankfort to give them a county of their own. It was originally supposed to be given the dignified name of Hardscrabble, but I think the Olive Hillians (Olive Hilliards?) decided to hedge their bets by naming it after the governor at the time, J.C.W. Beckham. The bill was passed, and Beckham County was created on February 9, 1904. It included land from Carter, Lewis, and Elliott Counties. And it violated just about all the rules for creation of new counties under the 1891 constitution.

Needless to say, not everyone within the bounds of the new county was in favor of its creation. So the first time officials in Olive Hill tried to collect taxes from somebody who didn't want to acknowledge their authority, the unwilling taxpayer filed suit asking the courts to declare Beckham County unconstitutional. Which they did. Rather quickly, as a matter of fact. By the end of April 1904—less than three months after its creation—Beckham County, Kentucky was dissolved. [2]

And it stayed very much dissolved until the current pandemic. But amidst all the death that the coronavirus has brought to the country, I suppose we should be encouraged that Beckham County has somehow been given new life. I discovered this one day by looking for a very handy resource updated daily on the New York Times website. It provides an interactive map of each state showing the number of cases and deaths in each county. If there are no cases in a particular county, then no county name and no statistics are shown.

In the southeastern corner of Kentucky—nowhere near Olive Hill (the seat of short-lived Beckham County)—is a rather infamous county called Harlan. You wouldn't know this from the current NYT resource because no cases have been recorded there. But when I googled "Kentucky coronavirus map" I discovered something very strange. I didn't need to click on the link to the actual NYT map, because coronavirus statistics for every county of Kentucky—even those with no cases—were listed on the search page, with Wikipedia given as the source. And by continuing to click the down arrow to complete the list, I finally got to the end. And there, much to my surprise, I discovered the resurrection of Beckham County by act of an apparent Wikipedia/Google collaboration. It had clearly replaced Harlan County, which was never mentioned. [3] 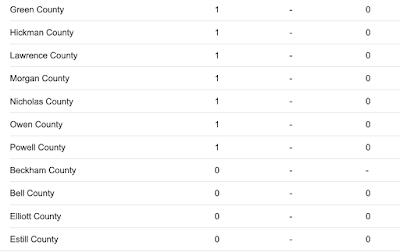 Frankly, I cannot imagine any circumstance in which Beckham might come to replace Harlan on any list of Kentucky counties. A.) The names are in no way similar. 2.) Olive Hill and Harlan are over 150 miles apart. And finally III.) Beckham County doesn't exist, hasn't existed for 116 years, and its existence lasted less than three months.

The life, death, and resurrection of Beckham County by Wikipedia (or was Google the true culprit?) is one of the more obscure stories that has come out of the coronavirus crisis. But it is certainly fascinating, and, in its own way, hopeful. If a nonexistent county can be given new life during a pandemic, then certainly there must be some hope for those of us whose existence (and constitutionality) can be proven by proper documentation. Ah, but poor Harlan County... 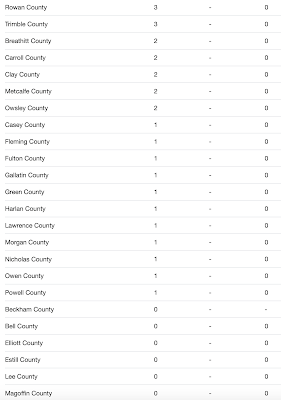