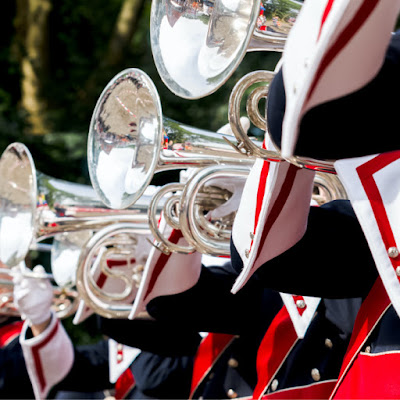 It's that time of year again, so I have once again ranked the principle fight songs of the Louisville Cardinals and their opponents this fall. In all honesty, I rather suspect that the football season will be canceled, but I'll leave this post up for posterity's sake regardless of what happens. And, we're off...

1. A recent poll was taken among people whose opinions count the most in these matters, and coming in at first place is everybody's favorite, Fight! UofL, Louisville's Greater Fight Song (that's my name for it—the Lesser, which is actually even better, is called Hail UofL... see below). It is nothing if not worthy of the red birds and white squirrels which it so ably promotes. So with the rest of the civilized world, I shout, Go Cards!

2. Pittsburgh is one of those schools whose main fight song is difficult to determine. I gave them the benefit of the doubt, however, and chose Hail to Pitt over the Pitt Victory Song. I'm not sure if it's the tune or the band's barely controlled, drum-fueled performance, but Hail to Pitt is one of the greatest of all fight songs, and comes in at #2.

3. The Notre Dame fight song is a true classic, the lyrics no less than the music. It's one of the few fight song tunes everybody recognizes—perhaps second only to the Washington & Lee Swing.

4. Virginia Tech's Tech Triumph is one of the unsung heroes among college fight songs. Perhaps it deserves to be higher, but competition is especially fierce this year.

5. Ramblin' Wreck is among the most fun of all college fight songs, and if it weren't for one important detail, this song would be ranked higher. Unfortunately, a song gets an automatic deduction if it's not original to the school, and Ramblin' Wreck is actually copied from an old Charles Ives composition entitled Son of a Gambolier, so it comes in at #5.

6. Here's to Wake Forest is one of the more original college fight songs. It usually ranks higher on my list, but for some reason, the average Coastal Division fight song is better than its Atlantic Division counterpart. So due to the large number of Coastal Division schools on this year's schedule (in other seasons there are only two at a time—Virginia and one other), Wake must wait until another year to move back up.

7. Boston College has a great fight song. It's a classic. But For Boston is just a bit too middle-of-the-road in comparison to the others. No disrespect, Eagles, but you come in at #7.

8. When it comes to Down the Field, I could repeat for Syracuse what I said about Boston College. Since it lacks a bit of the majesty of For Boston, the Orange come in at #8.

9. I would love to rank Virginia higher. They have a perfectly decent original number called the Cavalier Song. But their main fight song—the one the band plays when the team scores (in other words, not that often)—is perhaps the least original tune in the world of college fight music: Auld Lang Syne. They call it the Good Old Song, but nobody outside Charlottesville is fooled by that title. With the mandatory deduction for lack of originality, Virginia comes in at #9.

10. Miami's fight song is rather tacky and very un-fight-song-like. It sounds like the fanfare for a 60's TV musical revue starring Ethel Merman. It is therefore ranked #10.

11. Western Kentucky University's fight song, Stand Up and Cheer, is just sad. The song itself is okay—in fact it's a really great fight song. But it is, if anything, even less original than Virginia's. Composed as a secondary fight song for the University of Kansas (whose principal fight song is among the best in the land, both in tune and orchestration), Stand Up and Cheer is used as the main fight song for at least a dozen colleges and universities, of which Western is but one. It's clear that WKU didn't even cob their version from the source (Kansas, which rhymes "vim" and "win") but from Ohio U (which rhymes "team" and "steam"). There's really only one way to fall beneath the Hilltoppers in this year's rankings, but the same school annually brings up the rear. So keep reading after you listen to:

12. Florida State's fight song, not all that interesting to begin with, wins the award as the most racist song in the Atlantic Coast Conference—perhaps the entire NCAA. The school found a minor band of Native Americans to give their blessing to the team's exploitative mascot. But their fight song lyrics, which include references to scalping and the warpath, are just beyond the pale of good taste. One would hope, with the country becoming increasingly woke, that FSU would change its racist ways. We'll see. But in the meantime, the 'Noles' fight song comes in dead last in this year's fight song rankings.