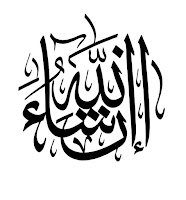 Blessed be the Lord, who daily bears us up; God is our salvation.
Our God is a God of salvation, and to God, the Lord, belongs escape from death.
⁌Ps 68:19-20⁍

Arabic speakers say something quite frequently that I can't help but admire: إِنْ شَاءَ ٱللَٰه, or inshallah. It means "God willing," which is an expression that exists in English. But unfortunately, we usually only use it these days in the rather silly expression, "God willing and the creek don't rise."*

The Spanish use the expression on a daily basis, probably without realizing it. The word ojalá, which means hopefully—or, more emphatically, especially when used alone, I wish!—is actually a corruption of the Arabic. This is more evident in its Portuguese counterpart oxalá, where the x is pronounced like the Arabic letter ش (sh). The point is that humans, for all our sense of entitlement, are guaranteed nothing. We usually think we are. We live as though we are. But in the end, it is God who wills and God who acts.

Psalm 68:19 is by no means as straightforward as it might seem if we just read one translation. Above we see that God "bears us up," but a more literal translation might be "loads upon us." For example the 16th century Geneva Bible (and the 17th century King James Version after it) added something that wasn't there: "ladeth us daily with benefits" (the italics cluing us in that those words weren't in the original). So the choice was between interpreting the verb to mean something not quite the same as the literal meaning, or adding a prepositional phrase so that the verb made sense in English. Personally, I prefer the modern interpretation, which is consistent in just about every contemporary translation. God isn't loading anything on us, but is bearing us or supporting us.

Something else I like about this verse is that in the Hebrew, it's actually quite pretty. The verb (load) I was just talking about, modified by the words "day-day" (day by day, or from day to day) looks like this: יוֹם יוֹם יַעֲמָס, and sounds like this: yom-yom-yamás.

This notion of God's support being a day-to-day thing bolsters the argument I made at the beginning. Nothing is guaranteed forever. We should think of our futures like Spanish-speakers do when they say ojalá. They may have forgotten it means God willing, but they don't have to—and neither do we. And any verb they put after Ojalá has to go in the subjunctive mood, meaning the thought expressed doesn't necessarily reflect reality. We don't use the subjunctive much in English, but Americans might say something like this: It's important that he eat healthy foods.• We leave off the s to put that verb in the subjunctive, because the healthy eating may or may not actually happen. It's neither an order nor a statement of fact, just a recommended outcome.*

And so, when we make plans, we should at least think,"God willing," even if we don't say it aloud. In fact, saying it unthinkingly might end up placing it in the realm of superstition. The goal is to realize in our hearts that we depend on God to bear us up. Without God we would fall, for on a moment-to-moment basis, to the sovereign God belongs escape from death.

I will never know how heavy my load really is, Lord, for you daily bear me up. Forgive me for taking your support for granted. And thank you for giving me life, sustaining me through it, and promising me that in the end I will be renewed; in Jesus' Name, who taught me this prayer: Our Father...

• Oddly, the British probably wouldn't say it this way, but would put the s on the eat, making it sound oddly imprecise to American ears.
* The expression "...and the creek don't rise" might also be considered to be in the subjunctive mood, since we're wishing the creek won't rise, not stating that it won't. Otherwise, we'd say, "...and the creek doesn't rise."