The Prayer for Wholeness 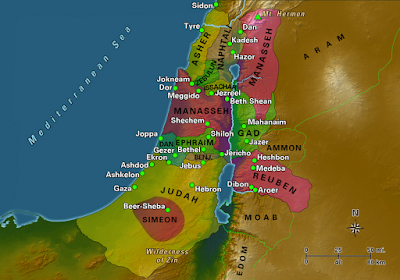 Give ear, O Shepherd of Israel, you who lead Joseph like a flock! You who are enthroned upon the cherubim, shine forth before Ephraim and Benjamin and Manasseh. Stir up your might, and come to save us!
Restore us, O God; let your face shine, that we may be saved.
❧ Ps 80:1-3


After the death of King Solomon, the Kingdom of Israel was divided in two: the southern one was called Judah (roughly the area called Judea in the New Testament), and consisted of the tribes of Judah and Benjamin; while the northern one retained the name Israel, and was made up of the other 9.5 tribes (Levi was the landless priestly tribe and divided between the two). The capital and Solomon's temple were located in the southern kingdom, and after the split, Judah was thought of as more faithful than Israel.

Israel's downfall to the Assyrians occurred over 120 years before Judah fell to Babylon, and many of its people were carted off into exile. Though we call them the ten lost tribes, many Israelites remained in the land; but just as their compatriots had been exiled, so Assyria forced foreigners to replace them. This mixture of peoples later became known as the Samaritans (after the northern capital of Samara). Just as Israel was thought of as less faithful than Judah before the invasion, Samaritans were judged harshly by Jews even centuries later in Jesus' day.

I feel as though poor Israel is specifically remembered here at the beginning of the 80th Psalm. Joseph was the largest tribe of the northern kingdom, and in Psalm 80:1-2, it is mentioned three times, for Ephraim and Manasseh were not tribes on their own, but were divisions of the tribe of Joseph. Benjamin was the smallest of the tribes, and located in the south. It should also be noted that the twelve tribes were named after the sons of Israel (aka Jacob), and that Benjamin and Joseph were the two youngest.

And so a reading of Psalm 80:3 is a reminder that the prayer for wholeness is found on the lips of all God's children—including the smallest, the exile, and the ones judged most harshly by others. In the Bible, being denied access to the place of God's perceived presence resulted in a theological distance from orthodoxy. Distance from the human norm, however, is not the same as distance from God. When God's face shines forth, the shunned are enlightened no less than the praiseworthy, and the warmth reaches the least no less than the greatest.

Pass me not, O gentle Savior, hear my humble cry;
while on others thou art calling, do not pass me by.
❧ Fanny Crosby

I pray in  the Name of him who taught me this prayer: Our Father...

We come unto our fathers’ God,
their rock is our salvation;
th’eternal arms, their dear abode,
we make our habitation.
We bring thee, Lord, the praise they brought,
we seek thee as thy saints have sought
in every generation.

The cleaving sins that brought them low
are still our souls oppressing.
The tears that from their eyes did flow
fall fast, our shame confessing;
as with thee, Lord, prevailed their cry,
so our strong prayer ascends on high
and bringeth down thy blessing.

Their joy unto their Lord we bring,
their song to us descendeth;
the Spirit who in them did sing
to us his music lendeth;
his song in them, in us, is one;
we raise it high, we send it on—
the song that never endeth.