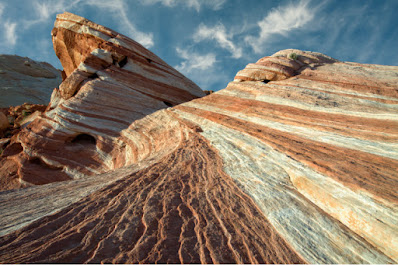 You set the earth on its foundations, so that it shall never be shaken... You set a boundary that they may not pass, so that they might not again cover the earth.
✙ Ps 104:5, 9
✙
An ancient view of the cosmos is evident here. The earth is stationary and unshakable, while not only the moon, but also the sun and stars revolve around it. Just as the earth was fixed in space, so (ideally) was everything on it. God divided sea from dry land, and appointed the proper place for the waters with "a boundary that they may not pass." This form of stability was important to a people who had little understanding of the sciences of astronomy and geology. I can see why most people found it comforting—at least up through the Renaissance.

Among those who were most comforted by it was John Calvin, who died in 1564. He hated the idea of mixing things. In his book John Calvin: A Sixteenth-Century Portrait, William Bouwsma wrote:


Mixture in any area of experience suggested to him disorder and unintelligibility... Mixture connoted 'adulteration' or 'promiscuity,' but it also set off in him deep emotional and metaphysical reverberations. He repeatedly warned against 'mixing together things totally different'... The positive corollary of Calvin's loathing of mixture was his approval of boundaries, which separate one thing from another. He attributed boundaries to God himself: God had established the boundaries between peoples, which should therefore remain within the space assigned them, a painful thought for an exile... He sometimes conceived of scripture itself as a God-given system of boundaries imposed on human existence; he admired Paul because, in spite of his anxiety, Paul had restrained himself from leaping over the boundaries of God's word. The escape of Joshua's two spies from Jericho in a basket obscurely troubled him, 'seeing that it is criminal to leap over walls.' He approved of land surveys because they ensured that 'each one has his rights and things are not confused.' But he disliked Gothic churches because their walls were opened up by broad windows.

I can see where Calvin's belief that boundaries were divinely ordained came from, but I do not agree with him that boundaries are inherently Christian. Jesus erased boundaries between male and female, Jew and Samaritan, rich and poor, saint and sinner, accepted and outcast, life and death. And wasn't one of the principle aspects of Paul's mission to erase the boundary lines between his own people and everybody else? So it's impossible for me to imagine that the man who wrote the following verses can also be held up as a standard-bearer for upholding boundaries:

In that renewal there is no longer Greek and Jew, circumcised and uncircumcised, barbarian, Scythian, slave and free; but Christ is all and in all! [Col. 3:11]

The psalmist might well have agreed with Calvin more than they agreed with Paul. There is a beauty to their view of creation and the feeling of safety that it engenders. And more knowledge about a universe on-the-move really has led many to reject the notion of a Creator. But if all God is to me is an easy explanation, then I doubt whether my faith is all that genuine in the first place.

The beauty of faith lies in the questions. The ancients answered their questions the best way they knew how, and often made poems of their answers. And we moderns—people of faith, at least—see poetry in the swirling stars and the layers of rock and earth that are millions of years old. Thus to believe not in an Almighty Being whose boundaries can never be crossed, but in a God of love who weaves new questions out of every answer, is to me the most satisfying faith of all.

However pleasant the places of old boundary lines, Lord, give me grace to reach beyond them to my neighbor on the other side, that together we may explore the questions of the universe; in the Name of the One who taught me to pray: Our Father...
They answered my questions with questions
and they set me to stand on the brink
where the sun and the moon were as brothers
and all that was left was to think.