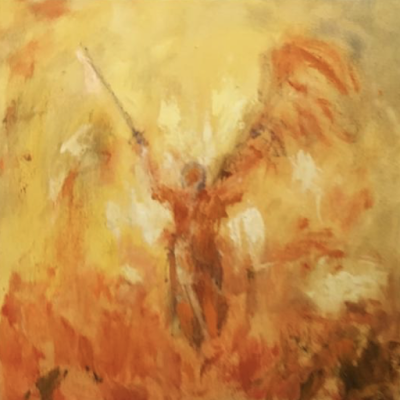 You make the winds your messengers, fire and flame your ministers.
✙ Ps 104:4
✙
I love reading Psalm 104:4 on Pentecost, because Acts 2 mentions both wind and flame as evidence of the Holy Spirit. But this verse is far less straightforward than it appears. For example, here's the way the Authorized (King James) Version renders it:


Who maketh his angels spirits; his ministers a flaming fire.

First the easy part: The old version of the second half is much more accurate, as is the use of the relative pronoun who at the beginning. There's no and in the second half, so it's clear that flaming modifies fire; and the first word of the overall verse appears to make it a continuation of what comes before it, not a brand new sentence.

But what is the first part about—the one making the winds God's messengers? Why is the modern translation so different from the older one, which makes God's angels spirits? Though the older version makes the whole verse more ambiguous, this is very easily explained:

The word we translate as wind, in fact, is also the word for spirit in both Hebrew (רוּחַ) and Greek (πνεύμα). And the word translated as messengers (מַלְאָכָיו) is also the Hebrew word for angels. And so there's quite a variety of very valid translations for that first clause.

I wonder, though, if this is an instance where Christian trinitarian theology was allowed to influence a translation. The fact that most contemporary versions translate this to correspond so closely to what Acts 2 says about the Day of Pentecost is a wonderful thing. But I need to remind myself that there are other possibilities, some of which—though not as tidily trinitarian—might actually be better.

So if the translation of the second clause is unambiguous, and if—as is customary in Hebrew poetry—it is a parallel statement to the first, more ambiguous clause, then I believe the best translation of Psalm 104:4 to be:


who makes his angels spirits, his ministers a flaming fire.

...or simply a slightly updated form of the KJV.

Christians have an amazingly anthropomorphized view of what angels are, and I suppose some people find that comforting. But I rather get the impression from the Bible that, when in their most natural form, angels are terrifying to behold. This might explain why the shepherds of Bethlehem were sore afraid (NRSV: terrified) when visited by an angel of the Lord on the night of Jesus' birth (though I will admit that any sudden appearance of a supernatural being is probably scary to a person sleeping outdoors).

So I've thought a lot about a translation this morning, but not so much about the theology behind it. But there is theology here, and I think it's probably quite straightforward, as is evidenced in the rest of Psalm 104. Whether I think of wind and flame as a messenger of God or the Holy Spirit herself, I have a constant messenger—whether in nature or in worship—of the reality of God's Word. The breeze, the hurricane, the candle flame, the wildfire, and the "heart strangely warmed"* all serve as a reminder that, as Maltbie Babcock put it in This Is My Father's World, "He speaks to me everywhere."

I thank you for your Word, Lord. Whether delivered via your messenger or directly by your Spirit, I will listen for what you have to say to me, and I will receive the life you grant me; through the One who taught me to pray: Our Father...

*Methodists look to John Wesley's Aldersgate experience, during which he wrote that he felt his "heart strangely warmed," as the spiritual beginning of their movement. A few days earlier, John's brother, Charles, had also had a conversion experience. It is thought that the following hymn was written to describe it: