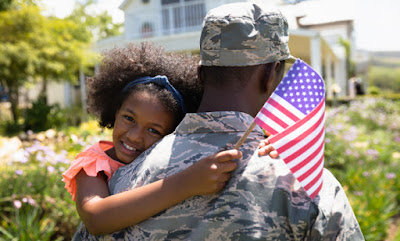 November 11 is called Veteran's Day in the United States. In the UK it's called Remembrance Day, and a song associated with it is I Vow to Thee, My Country. The words are a poem by Cecil Spring Rice, written sometime around 1910, which were later set to a tune which Gustav Holst adapted from his own composition, Jupiter (from The Planets).

I Vow to Thee, My Country is a song which first calls for loyalty to one's homeland, but ultimately to the Realm of God. It reminds me of two quotes, one from a Puritan divine named Thomas Manton: This is the first part and office of justice, to perform the debt we owe to our country, for public interests must be preferred before private.
And another more critical one from the 20th century preacher William Sloane Coffin: How do you love America? Don't say, 'My country, right or wrong.' that's like saying, 'My grandmother, drunk or sober': it doesn't get you anywhere. Don't just salute the flag, and don't burn it either. Wash it, make it clean.

Both quotes call for true love of country, not mindless flag worship. And so in consideration of the Reverends Manton and Coffin, I submit the following beautiful rendition of the aforementioned song: