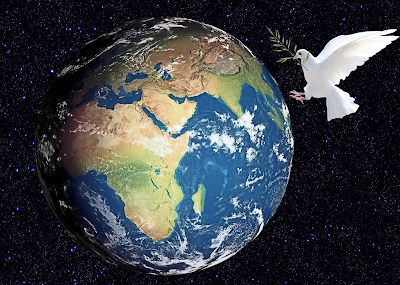 The heavens are the Lord’s heavens, but the earth he has given to human beings.
✙ Ps. 115:16
✙
What a profound statement, stating no less explicitly than the creation story itself that human beings have dominion over the earth. Though Psalm 24:1 states that the earth and everything on it belong to God, stewardship of it has nonetheless been given to us. And the more we know about earth science, and the more aware we are of what's going on in other countries, on other continents, and even in the oceans and seas, the more responsible we are for what we do to the environment.

There are many who maintain that human activity cannot actually change the climate, but even they can see the devastation that mining, industry, and uncontrolled development has wrought on the environment. Yet, environmental protection is bad for the economy, we're told. But in reality, it is only bad for those whose wealth is enhanced by environmental destruction. By giving them veto power over all other people and every other creature on the face of the earth, we have surrendered a God-given responsibility to protect the creation in our care.

The sad fact is that choosing to exploit the earth instead of nurture it is indicative of the way we also treat one another. Just as we have the technology to change the way we use earth's resources, we have the resources to change the way the needy live. We simply choose exploitation over coöperation and neglect over nurture. Something's gotta give.
The Advent season is the ideal time to take stock of how we treat the world and whether or not we are our brother's or sister's keeper. If God has given the earth to human beings, then we need to remind ourselves that one such human being was God Incarnate in the flesh, born in a stable, who grew up to show us the way we should live. If Jesus is our Example—and if we call ourselves Christians, then that is one of the principle rôles he must play in our lives—then our actions toward God's world and God's children must reflect the way Jesus lived and loved.

The earth you have given us is in trouble, O God my Creator. Make me part of the solution, not part of the problem. And in caring for the earth, may I also see to the nurture of the people who live on it; in the Name of Jesus Christ the Savior, who taught me to pray: Our Father...