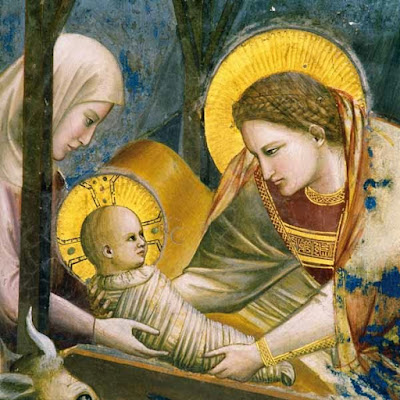 In my mind, certain words seem to perfectly represent the thing they signify. There's the Spanish word sacar (to take out), the German word munter (lively), and the English word baby, to name but a few. Similarly, there are words that I think do a terrible job representing the thing they're supposed to mean, such as the Spanish word for carrot (zanahoria). The best of example of this latter phenomenon in English is the word swaddling. To me, the word swaddling sounds soft and fluffy and cozy. In reality, it is anything but. Instead of soft fleece to snuggle in, swaddling involves tight bands of cloth intended to restrict movement—sometimes completely.
Perhaps I'm not the only one who is troubled by the discrepancy between the sound and the meaning of the word swaddling. After all, when recounting the birth of Jesus, most modern translations of the scriptures say that he was wrapped in strips or bands of cloth, instead of in swaddling clothes, as older translations put it. And I think that it's important that they make sure that we understand what swaddling really means, because nothing is just thrown into the scriptures—everything means something important.
So here I'll turn to today's psalter passage:
The snares of death encompassed me; the pangs of Sheol laid hold on me; I suffered distress and anguish. Then I called on the Name of the Lord: “O Lord, I pray, save my life!”
✙ Ps. 116:3-4
✙
There's something about the third verse that causes me to wonder. The phrase translated as pangs of Sheol should probably be translated as some sort of constriction or straits. And I think that for two reasons. First, it is obviously a parallel phrase to the snares—or cords—of death. But what's fascinating here is that the word translated as pangs is almost identical to the place where Israel was held in bondage: Egypt. Thus, instead of snares and pangs, we might also say the bands of death and the bondage of oblivion.
With this in mind, I want to return to the Christ Child's swaddling clothes, wrapped around him immediately after his birth. When the Divine became one of us, God's infant form was born into the human condition best expressed in the old funeral liturgy: In the midst of life, we are in death. If the Christ would conquer our end, then from the beginning he would be mortal as we are.
This is not a very cheery Christmas message. But it is the Christmas message. From the swaddling clothes to the nails of the cross, Jesus contended with our mortal limitations, and he overcame them. The Child in the manger is no less our Savior than the Man on the cross. Thanks be to God!
I am bothered by the Old Testament concept of death. All end up in Sheol, whether they're evil or good. And Sheol is a place of darkness and separation from God and all the living. Sheol might also be interpreted as nothingness, but is still negative. The only way I can reconcile it with anything but complete hopelessness is the notion that it is a place of sleep and rest.

Thank you, Lord, for freeing me from the hopelessness that keeps me in bondage to the status quo. Help me to live to the fullest the life you've given me in Jesus Christ, who taught me to pray: Our Father...
Love, wrapped in swaddling clothes,
born to bind up our wounds;
all weary souls will rejoice
when they hear the good news.