All the peoples of the earth may know that the Lord is God; there is no other.
✙ 1 Kings 8:60
✙ 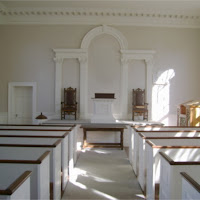 The Bible is really, really opposed to idolatry. From start to finish, this is a major concern. In that part of the world at that time in history, virtually everybody worshiped statues and stones and springs of water. Everybody had a whole panoply of gods, and if worshiping them didn't seem to be working, then people were always willing to adopt a neighboring nation's god that seemed to be doing a better job. But Israel only had one God. And not only that, this God could not be seen—there were no images or statues to look at to show the faithful what they were worshiping. Indeed, among the most important commandments given to the Hebrews was one that said there could be no graven image assigned to their One God.
Why was this, anyway? Wouldn't a statue have helped remind people of who they were and whose they were? The problem is, once we create an image of God, that image begins to replace the Divine in our minds. We begin to try to fit God into our perception of who God should be, rather than allowing our minds to admit to God's infinity and incomprehensibility. John Calvin once said "that the human mind is, so to speak, a perpetual forge of idols." Even when we don't have a statue or a picture, our minds manufacture images of that which we cannot imagine, thereby assigning limits to God. Also, once we have an image of God in our minds, say, of God as a male, or God with light skin, then we can't help but prioritize those who look like God, while denigrating those who don't. It may not be intentional, but it's what happens.
And so in Genesis and Revelation and every book in between, we're told that there's only One God. Rather than broadening our horizons and adopting the gods of the nations, we're also told that it is they who will eventually be drawn to Israel's God. We should not only keep up the good fight against idolatry in our lives, but we should expand it to search for and root out other gods, such as the worship of power or wealth—for those, too, are forms of idolatry. Thus will our love for God and neighbor increase, while our dependence on the things that divide us will eventually pass away.
✙
Lord, who will not fear and glorify your Name? For you alone are holy. All nations will come and worship before you, for your judgments have been revealed.
✙ Revelation 15:4
✙

✙
Forgive me, God, when I create in your place an image of my own liking. And forgive me when I bow down to that which is not you. May my mind find peace only when it rests in your incomprehensible love and power, for Jesus' sake.
✙