The lot is cast into the lap, but the decision is the Lord’s alone.
✙ Proverbs 16:33
✙ 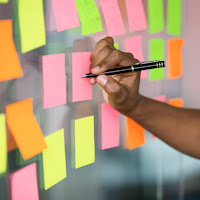 I hear it's almost impossible to speak proper Arabic without frequent use of the word inshallah.* We'd translate it as "God willing." And we use that phrase sometimes. Probably more often, we use the longer, but far less serious phrase, "Lord willing and the creek don't rise." The point, of course, is that we would do well to remember, when we make our plans or speak of the future, that we are not ultimately in charge.
I don't know the psychology of all the Arabic-speakers on earth, of course. But I can't imagine, when the word inshallah slips from their lips, that they really mean it every time they say it. So just saying "God willing" doesn't suddenly make a person aware of God's presence in the world and in our lives. But even if we don't necessarily say it, we should think it. As we make our plans for the future, it's important to remember that something else might happen—even that something else should happen. Our plans, after all, are made without all the facts. If they all came to pass as we thought we wanted, we would probably be very unhappy with the results.
It's best to remember, as Wendell Berry once said, We live the given life and not the planned. When things don't turn out as planned, we are often disappointed. But as people of faith, we should take the long view and gladly place our lives in the hands of the One who sees much further into the future than we can.
✙
You ought to say, “If the Lord wishes, we will live and do this or that.”
✙ James 4:15
✙

✙
I place my life in your hands, O God, and trust that, because I love you, you will work all things for good, that I may fulfill not my purpose, but yours.
✙