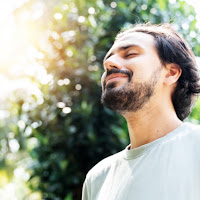 Today's theme is A Quiet Place. The gospel reading—Mark 6:30-34—is a kind of lead-up to one of the greatest miracles in the Bible, namely the Feeding of the Five Thousand. Appropriately our organist's prélude is Sweet Hour of Prayer. Our hymns are Take Time to Be Holy, Come and Find the Quiet Center, and Near to the Heart of God. The sermon talks about the need for quiet time, as well as the image of Jesus as a shepherd. Here is the video of the worship service, followed by a manuscript of the sermon:
A Quiet Place
Part I
Today’s brief scripture reading is actually part of a longer, tightly-knit story—part of which is as disturbing as anything we find in the gospels outside the crucifixion itself. The stage is difficult to set without making the whole sermon a history lesson, but let me try it in a nutshell.

As you probably already know, what we think of as Israel came under Roman rule a few decades before Jesus was born. At first, it was just a client kingdom of Rome with hellenized Jewish kings left in charge. Hellenized means they were more Greek than Jewish. These kings were not respected by the people, and they became increasingly weaker and more despotic as time went on. The weaker they became, of course, the stronger the Roman presence in the area.

By the time we get to Jesus’ ministry, a particularly unpleasant king named Herod was on the throne. He was just a shadow of his father, who was also called Herod, and there was more and more unrest all around.

If you want an example of the kind of king Herod was, just read the sixth chapter of Mark. In it, we read how Herod had imprisoned John the Baptist. To keep a promise he’d made to his wife, he had had John beheaded. You see, John had criticized the marriage, because Herod had married his brother’s wife. I think Mark tells us this to show us the kind of leadership the people were suffering under, and to show us what the king’s priorities were.

And so into this unpleasant void, Jesus sends his disciples out in six pairs to teach and to heal—to share his presence with a people in despair. And that’s what they do. Under his authority, they’re successful. And they return, happy but exhausted, to their Teacher. And Jesus, as always, was surrounded by needy people.

We don’t know precisely how long the disciples had been gone. It could’ve been a few days or a few weeks. But Jesus has compassion on them. I’m sure he wants to hear all about what they’d been doing. I’m sure he had many questions about the people they’d encountered, and what they’d been able to accomplish. But his first reaction seems to have been to get them away from the crowds, into a boat, and off to a secluded place—a quiet place, as Mark calls it. And this is important, because it points to a dimension of being human that’s often overlooked by religion—at least by Christianity.

Part II
Let me start off talking about this by saying that the pandemic wasn’t nearly as hard on me as most people thought it was. I was pretty good at the social isolation aspect of it. And so I never came down with the virus, and I’ve since been vaccinated. So, praise God, that part has been good.

But the part that was especially difficult for so many of you all was pretty okay for me. I love it whenever I’m around the people of the church. But there’s always a point at which I need to go home and be alone. That’s how I re-charge. And if I’m alone for an extended period, it doesn’t necessarily occur to me that I might want to be around people. Only when I’m actually around them do I realize that it’s good for me… that I enjoy it, even.

This is called being an introvert. And everybody’s on a continuum between introversion and extroversion. A lot of people confuse being an introvert with being anti-social, which isn’t true at all. Being an introvert simply means that you process things on the interior, rather than through interaction with other people. And it means that you need alone time to re-charge your batteries. If you wonder how introverted you might be, just think about how hard the lockdown was on you. If took it calmly—if you didn’t go stir-crazy—if you were able to handle calmly by reading or thinking or taking long walks—then you might tend toward the introverted end of the spectrum.

The reason I’m bringing this up here is because we read throughout the gospels that Jesus tended toward introversion. When he was being crowded by people—especially people making demands of him—he needed to get away. Sometimes he went across the lake; sometimes he went to the mountaintop; sometimes he escaped to a quiet garden. Sometimes he was totally alone; sometimes he took his closest friends with him. Though the place and the people might change, it’s clear that Jesus needed quiet time to collect his thoughts and to get close to God.

Churches can be very extroverted places. And a lot of us think this is normal—perhaps even a good thing. If we want to be good evangelists, we need to be extroverted… what many of us might call outgoing. But there’s a lot more to faith than simply talking about it. And I think Jesus helps us understand that in the way he reacts to hustle and bustle and to stressful conditions.

Part III
Getting away from it all is never an end unto itself. It’s a way of finding balance. But in today’s reading—and this will be continued into next Sunday—we see that getting away from it all takes a back seat to acts of justice and mercy. We saw earlier what kind of world Jesus’ people lived in. We heard about the violence being done to God’s children. We sensed how bereft they were because of a lack of real leadership. So just as Jesus sent his disciples among them as ministers of the kindom, so he had compassion for them, because they were like sheep without a shepherd.

Now we think of shepherds as being religious leaders—the word pastor, after all, means shepherd. But in the ancient Near East, that symbol was reserved for monarchs. David was their ideal shepherd. As a boy, he’d been a literal shepherd. And as a man, he had shepherded his people with courage, wisdom, and love. Herod was his opposite. He lived in royal trappings, but never acted like the kind of king David was. He lived it up in his palace, while his people suffered hunger and persecution and one injustice after another.

And so when the crowds saw Jesus and his disciples get into a boat to head for the other side of the lake so they could have some quiet time, they ran along the shore on foot and reached the other side ahead of Jesus’s boat. I guess if they really wanted alone time, they could’ve stayed in the middle of the lake in the boat to think about their mission and to pray. But Jesus went ahead and met the crowds, and Mark tells us he “began to teach them many things.”

We probably don’t often think of Jesus as being Herod’s exact opposite, but here we see that he is. What happens next we’ll hear about from John’s point-of-view next Sunday, so let me share with you today how Mark described it (Mark 6:35-44, NLT):

Late in the afternoon his disciples came to him and said, “This is a remote place, and it’s already getting late. Send the crowds away so they can go to the nearby farms and villages and buy something to eat.”
But Jesus said, “You feed them.”
“With what?” they asked. “We’d have to work for months to earn enough money to buy food for all these people!”
“How much bread do you have?” he asked. “Go and find out.”
They came back and reported, “We have five loaves of bread and two fish.”

Then Jesus told the disciples to have the people sit down in groups on the green grass. So they sat down in groups of fifty or a hundred. Jesus took the five loaves and two fish, looked up toward heaven, and blessed them. Then, breaking the loaves into pieces, he kept giving the bread to the disciples so they could distribute it to the people. He also divided the fish for everyone to share. They all ate as much as they wanted, and afterward, the disciples picked up twelve baskets of leftover bread and fish. A total of 5,000 men and their families were fed.

So if there was any doubt about how we’re supposed to view Jesus here, this section clears it up. Herod was no legitimate king. He did not shepherd his people. But here, not only is Jesus shown as caring for and providing for these sheep without a shepherd, the imagery used to describe him sounds like it might’ve come straight from the 23rd Psalm… right down to the green pastures.

Next week I think the gospel will invite us to identify with the hungry crowd, the sheep in need of a shepherd. But no matter who we are or how we’re feeling, there’s a place for us in the story of Herod and Jesus, of the disciples of Christ and the people they were called upon to serve.
—©2021 Sam Greening, Pilgrim Christian Church