Happy are those whose transgression is forgiven, whose sin is covered.
✙ Psalm 32:1
✙ 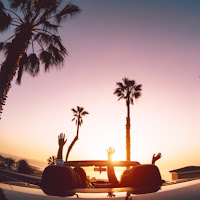 What makes you happy? There are many things we might name if somebody were to ask us this question. But the ones we speak out loud might not necessarily match with what lies in our hearts. For too many of us might secretly harbor a desire for wealth, or power, or the freedom to act upon our lusts.
The question, What makes you happy? often makes me think of a man from my hometown who twenty years ago won $27 million in the lottery. He had led an unhappy life up to that point (in fact he'd just gotten out of prison), and this was his chance at fulfillment—or so everybody thought. Within a year, he'd gone through half his windfall, buying a mansion in Florida, dozens of luxury cars, a Lear jet, and a great deal of tacky art. By 2006, the money was gone and he was discovered living in a storage unit surrounded by used needles. In 2013, he died alone and in debt.
If we need to learn that money does not bring happiness, perhaps this lottery winner is Lesson #1.
The Bible talks about happiness from a different angle. To be truly happy is to be set free from past wrongdoing, and given a new life with new values and new priorities. Jesus showed us our goals in the way he lived. And he opened the path to our goals in the way he died. In him we have forgiveness and the example of a life lived for others. This is what the Bible means by freedom.
✙
He set us free through the Son and forgave our sins.
✙ Colossians 1:14
✙

✙
Reorder my life, Eternal God, not around what I dream of, but according to your will.
✙