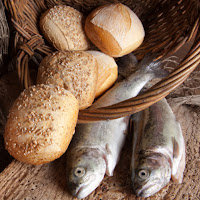 We are entering that extended period during which, once every three summers, the appointed gospel reading comes from John 6. Today's theme, therefore, is the feeding of the five thousand. with five loaves and two fish. Our hymns include Guide Me, O Thou Great Jehovah (Bread of Heaven), Break Thou the Bread of Life, and Great Is Thy Faithfulness.
Here is the video of today's worship service, and beneath it you will find a manuscript of the sermon:
SERMON: PART I
I estimate that this is probably my twelfth time preaching on this text since I got out of seminary. That’s not all that important, I don’t guess. But it seems to me that I always start the sermon with the same factoid. But it’s an important fact, so I’m going to share it again.

So if there are miracles of Jesus that are found in all four gospels, we have to admit that they’ve got to be important. And there are… or better put, there is… because there’s only one. And it’s this one: The Feeding of the Five Thousand.

When we read Bible translations like the old King James or the more modern NIV, we often encounter the word men. The problem is that the original language—which is Greek¬—has two words ανδρος and ανθρωπος, both of which sometimes gets translated as men. But that second word—the one that gives us words like anthropology—refers to men, women, and children, or in other words, humans.

And in all four gospels, when we hear about the miracle of the Feeding of the Five Thousand, this refers only ανδρες—or men. Only one gospel—Matthew—points out what this means. And that is that Jesus fed a lot more people than just five thousand, because there were women and children there, too. This is why I prefer translations that translate these two Greek words with distinct English words—that way I know when the Bible says men, it means male human beings, and isn’t trying to refer to people of any gender.

PART II
So let’s get to the story itself. I gave you a bit of a set-up last week. Jesus and the disciples needed to get away from it all. They’d been hard at work, giving all they had to serve people in need. And the people at that time and in that place were deeply in need—and they had no leadership. They were part of a huge empire that didn’t care about them at all, and the person that was in charge of their area—Judah and Galilee—cared only about himself. They were like sheep without a shepherd. And so Jesus and the twelve got into a boat to go to the other side of the lake—the side of the lake where the people were not. The way Mark described it last week, the people saw where Jesus was sailing, and headed him off at the pass. They ran on foot to the other shore. John puts it just a little bit differently. According to him, Jesus and the disciples make it to the other side, and head for a hilltop to pray and talk. It wasn’t until they got up there that the people caught up with Jesus. The order of what happens next isn’t exactly the same in all four gospels. For example, some say that Jesus spent a great deal of time teaching them. But here in John, his mind goes straight to… lunch.

Before the crowd even reaches them, Jesus challenges the disciples to feed these thousands of people. Their reply? Impossible. But one of the first arrivers is a kid. And he’s got some food with him. But it’s still just a drop in the ocean when you’re talking about thousands of people.

But a few loaves and a couple of fish was enough to settle Jesus’ mind. More people followed the little boy up the hill. More and more until there were thousands. And as they arrived, he had them sit down and he gave thanks to God. Then he began to serve them from out of the little boy’s bread and fish. And that’s all it took. The food was shared, and somehow there was enough for all. Too much really. Because when those thousands of people had eaten, he had his disciples gather up the leftovers, and they filled twelve baskets.

Some people who are uneasy with miracles have an explanation for the feeding of the five thousand. When they saw the little boy share his bread and fish with Jesus, and the disciples began to share it with the crowd, they realized that they had something to offer as well. And so they all shared with each other. And once they all shared, there was enough for all. “As it is written,” said the Apostle Paul, “the one who had much did not have too much, and the one who had little did not have too little” [2 Cor. 8:15].

This is a good and timeless lesson. And it fits nicely with the gospel of Jesus Christ. It was the faith of a little child that allowed him, of all the people on the hilltop that day, to share all he had that others might not go hungry. And once this offering was blessed by Jesus, all were inspired to do likewise. This is a message that could be preached over and over again. In fact it is preached over and over again… by televangelists who try to get into the wallets of the poor. Send more money, and you’ll receive blessings untold. And because they do this in the Name of Jesus, the vulnerable give more than they can afford to, in the hopes that they’ll get something in return.

PART III
I’m satisfied to let this miracle stand as a miracle. And so were John and the other three real evangelists (Matthew, Mark, and Luke). In fact, in John’s gospel, we find the people declaring him to be a prophet and trying to seize him and crown him as the people’s king, right then and there. I suppose this might have happened in response to someone who inspired them to share what they had. But a better explanation is that they were responding to a miracle.

Again, sharing is a great message. I say it all the time: The gifts that we have from God are not ours to hoard, but God’s to share. But the message we read in John 6 isn’t about sharing that we might receive more in return. It is nothing less than the grace and the glory of God.

Today I’m talking about grace. The people received from the hand of God that which they did nothing to earn. They didn’t pay for it, and there’s no indication in any of the four gospels that anyone other than a lone boy shared anything. This is not an example for a stewardship message—a model for how we can share our earthly resources to improve the lives of others and support the church. Once again, that’s an excellent message. But it’s not this message.

This message is about the unending, inexhaustible love of God. It is about Jesus’ self-giving. And that giving is both physical and spiritual. I’ll preach on John 6 again next week, and then I’ll talk about God’s glory—glory as it’s interpreted by John. So if you’d like to read the whole chapter in advance to remind yourself what it says, I guarantee you’ll be surprised all over again… and you’ll be challenged.

Today, though, let grace be enough. Through Christ, God gives us what we don’t expect or deserve. God feeds us when we cannot provide for ourselves. God loves us when we are unlovable, and forgives us when no one else will. I pray that our hearts can be open to God’s gifts. Jesus is not waiting for a better crowd to share them with. And we will never find a better Savior than the One who fed the throng with five loaves and two fish.
—©2021 Sam Greening, Pilgrim Christian Church