The Unwanted, the Unloved, the Uncared For

Give justice to the weak and the orphan; maintain the right of the lowly and the destitute.
✙ Psalm 82:3
✙ 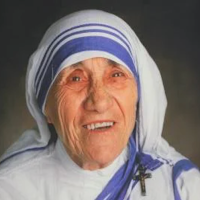 In 1910 Agnes Gonxha Bojaxhiu was born to an Albanian family in Skopje, (Northern) Macedonia. Her father died when she was young, and her mother brought her up as a pious Roman Catholic. She first felt the call to a religious life at the age of twelve, and at eighteen, she entered a convent in Dublin, Ireland, taking as her new name Sister Mary Teresa.
Before the age of twenty, she was sent to India, and by the time she was 21 she was teaching at a high school in Calcutta, which served girls from the city's poorest neighborhoods. She quickly learned to speak both Hindi and Bengali fluently. In 1937, when she made her final vows, she began to be called Mother Teresa, and eventually became the principal of her school.
In 1946 she experienced a "call within a call," and requested permission to leave her post at the school in order to move to the slums and minister to the poorest and sickest people in the city. Permission was granted in 1948. She received some basic medical training, changed into the blue and white habit that she would wear for the rest of her life, and left for the slums with the sole intention of helping "the unwanted, the unloved, the uncared for."
She quickly developed plans which she put into action, establishing clinics, schools, orphanages, and homes for the most destitute—including Calcutta's lepers. She began a new order of nuns, called the Missionaries of Charity, which became a force to be reckoned with in a city where Christians are a tiny minority. By the 1960's she expanded her work internationally, helping people of all faiths in many different countries. She ministered to children in war-torn areas, and people suffering with AIDS. In her lifetime, she won many awards, including the Nobel Peace Prize in 1979.
By the time of her death in 1997, the community she founded had over 4000 members. Today the Missionaries of Charity has over 5000 members, serving in 139 countries. In 2016, Mother Teresa, Pope Francis recognized Mother Teresa as a saint in the Roman Catholic Church.
✙
Little children, let us love, not in word or speech, but in truth and action.
✙ 1 John 3:18
✙

✙
Make us worthy, Lord, to serve those throughout the world who live and die in poverty or hunger. Give them, through our hands, this day their daily bread, and by our understanding love, give peace and joy.
✙ Mother Teresa of Calcutta
✙