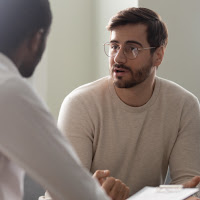 There are words that hurt and words that heal. When our backs are against the wall or someone has done us wrong, we often think that we have every right to use hurtful words. When we feel this way, perhaps we should consider the patriarch Joseph. As a young boy, Joseph was resented by his older brothers, who took him out into the desert and sold him into slavery. Returning to their father, they told him his beloved son had been killed by a wild beast.
But in captivity in Egypt, Joseph remained faithful to his God and eventually became Pharaoh's prime minister. And then, when famine hit the entire region, Joseph's brothers came to Egypt, hat in hand, wanting to buy grain. They had no idea that the man from whom they were asking help was the little brother they had wronged so many years before. And when they finally found out, they were scared almost to death, for they knew they deserved not his help, but his retribution.
Yet Joseph comforted his brothers and spoke kind words to them.
✙ Genesis 50:21 (New Century Version)
✙
He reassured them that, though they had intended to do him evil, it was all part of God's plan to deliver Israel (Jacob) and his people from the jaws of starvation.

Though we are imperfect disciples, we, too, should use words that help and not hurt, reassure rather than judge, and build up rather than tear down
✙
Let no evil talk come out of your mouths, but only what is useful for building up, as there is need, so that your words may give grace to those who hear.
✙ Ephesians 4:29
✙

✙
Reform my speech, O Christ. Inspire my speech, that it may be used for the building up of your kindom.
✙