The Hand That Created 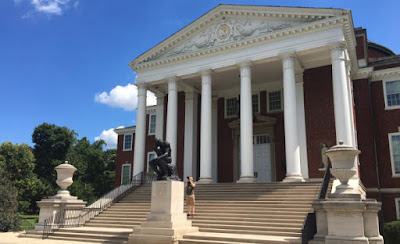 Oldest known full-size casting of The Thinker, in front of Grawemeyer Hall, University of Louisville
Thus says the Lord, your Redeemer, who formed you in the womb: I am the Lord, who made all things, who alone stretched out the heavens, who by myself spread out the earth.
✙ Isaiah 44:24
When you think about it, there's no beloved work of art that is separated in the minds of its admirers from the hand that created it. There are other great works—Greek statues, and ancient European cave paintings—that fascinate us, but whose creators we don't know. But even then, one of the commonest remarks made about them is how much we would love to know who was responsible for them.
How different it is with the beauty of the earth and the dignity of humanity. We admire them, but give little thought to their Creator. Too many people have cast off their awe of the Divine because they think they know just enough scientific theory to push God out of the picture. The Bible doesn't prevent us from accepting what physics and biology are now proving, but it does require us to see the universe in another dimension: That of love. A monolithic God did not simply create a process, but a God in relationship created all things to tie together. The Creator's Word moved the Spirit and the world came into being. That Word we know as Christ. And as Christ is our beginning, he should be our end. When we look in the mirror, when we look around at the beauty of the earth, or when we look up and see the stars and swirling galaxies, let us remember whose we are, and give thanks.
✙
Yet for us there is one God, the Father, from whom are all things and for whom we exist, and one Lord, Jesus Christ, through whom are all things and through whom we exist.
✙ 1 Corinthians 8:6
✙

✙
I praise you, O God, for I am fearfully and wonderfully made. Wonderful are your works; that I know very well.
✙ Psalm 139:14
✙