Your servant will no longer offer burnt offering or sacrifice to any god except the Lord.
✙ 2 Kings 5:17
✙ 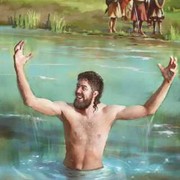 Naaman is an important figure in the Hebrew Bible. He was not an Israelite, but a Syrian, miraculously washed clean of his leprosy:
Convinced of the power of the God of Israel, not only that he is God, but that he is God alone, and that indeed there is no God in all the earth but in Israel—a noble confession, but such as intimates the misery of the Gentile world; for the nations that had many gods really had no God, but were without God in the world. He had formerly thought the gods of Syria gods indeed, but now experience had rectified his mistake, and he knew Israel's God was God alone, the sovereign Lord of all. Had he seen other lepers cleansed, perhaps the sight would not have convinced him, but the mercy of the cure affected him more than the miracle of it. Those are best able to speak of the power of divine grace who have themselves experienced it.
✙ Matthew Henry (1708)
The grace that fell on Naaman was not delayed until after he had been taught the law of God or until after he'd been circumcised. God simply liberated him from a life of misery and exclusion. Not everyone in Israel was pleased with what happened—some felt Naaman should've earned God's love. But in this action, God showed that divine rules and human rules aren't necessarily the same.
Thousands of years after Naaman, we who profess the grace of God often forget that our worship of and service to God gain us nothing. They are either grateful responses to what God has done and is doing in our lives, or they are nothing at all.
✙
I appeal to you therefore, brothers and sisters, by the mercies of God, to present your bodies as a living sacrifice, holy and acceptable to God, which is your spiritual worship.
✙ Romans 12:1
✙

✙
Thank you for your love, O God. Grant me the blessing of serving you in gratitude and freedom.
✙