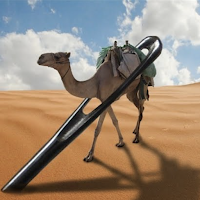 Today is the 20th Sunday after Pentecost, and the scripture lesson was the story of Jesus and the Rich Young Ruler (Mark 10:17-27). This encounter was one of the most important in the gospels, and was recorded by three different evangelists (Matthew, Mark, and Luke). In it, Jesus talked about the camel going through the eye of the needle. In fact, this illustrations was not only addressed in today's sermon, but also in the children's message.
Speaking of the children's message, I was surprised by the children today with an acknowledgment of Pastor Appreciation Sunday, with a giant card and lots of presents.
The texts of the pastoral prayer and benediction can be read in a post from yesterday.
A video of all this can be watched below, followed by a complete transcript of today's sermon.
Good Grief
When he heard this, he was shocked and went away grieving, for he had many possessions.
—Mark 10:22
This morning’s reading is one of the most famous ones from the life of Christ. This story is found in three of the gospels—Matthew, Mark, and Luke—in nearly identical form. It’s also found in sources outside the Bible as we know it. So even the most skeptical modern scholars admit that this event really happened. So no matter who we are, we have to admit that whatever message it contains must be an important one.

Let’s look at this passage, starting with the title. The gospels, of course, don’t actually give titles to the events they tell about. But tradition has given this story a name: Jesus and the Rich Young Ruler. Every year when I talk about the Epiphany, I feel the need to remind you how unscriptural the song We Three Kings is. It’s a lovely song with a meaningful message. But when we read the Gospel According to Matthew, it’s pretty clear that the wise men who visited the Baby Jesus weren’t kings. Nor does the Bible tell us how many of them there were. They presented the Christ Child with three gifts. But there could have been two wise men. Or there could’ve been a hundred. We only say there were three to correspond to the gold, frankincense, and myrrh.

Along the same lines, calling the man in today’s story the “rich young ruler” might also contain at least one big assumption. At the very least, this title is a mashup of more than one version of the story. We do know that he’s rich—that’s clear in all three versions of the story. But the fact that he’s a ruler is mentioned only in Luke. And none of them say that he was young… but I think this notion is gleaned from the version Pat read to us a few minutes ago. That’s because in Mark, he doesn’t amble up to Jesus, or mosey up to him, or even walk up to him. Mark tells us he ran up to him. And no self-respecting old ruler—or even a middle-aged one—would run up to Jesus. So we assume that this particular man must’ve been young.

So let’s deal with what Mark alone is telling us, and forget that Luke tells us he was a ruler, and go with the assumption that he might’ve been young. This young man ran up to Jesus, indicating that he was probably either really anxious to hear what Jesus said, or that he was simply in a hurry and didn’t care to commit any more time to this exchange than he needed to.

“Good teacher, what’s required of me to inherit eternal life?” he asked Jesus. This indicates first, what Jesus was becoming known for, and second, what this young man was concerned with.

The first thing Jesus said in reply takes us a bit by surprise. He said, “Why is it you’re calling me good? Only God is good!”

But what did he mean by this? Did he mean that he wasn’t good? or was he asking, in effect, Do you think I’m God? or, was he simply trying to make the young man think about the words he was using?

But Jesus didn’t wait for a response and simply reminded the man of some of the Ten Commandments. “I’ve kept all those since I was even younger than I am now,” he answered.

“Good,” said Jesus, “you’re almost there. The only thing left is to sell your possessions and give the proceeds to the poor, then you’ll be free to follow me.” But he couldn’t do that. He just had too many things. And so he went away, grieving this lost opportunity to become one of Jesus’ disciples.

Just as in our day, health and wealth and a good reputation were all signs of God’s blessing. Sickness and poverty and exclusion were all signs of being cursed—or at least ignored—by God. Few of us here watch the kind of televangelists who equate money and faith. But we nonetheless often equate material comfort with blessing.

And why shouldn’t we? We’re told to show gratitude, and to thank God at all times. So of course we’re thankful when things go well for us. But we should never think of our blessings as rewards for being good… which is probably why Jesus felt it necessary to ask the “rich young ruler” about his thoughts on what good meant to him. Perhaps he was thinking that he was wealthy because he had obeyed all those difficult commandments, and that had he been a bad person, he would be poor.

It’s at this point that Jesus did something he did nowhere else in the gospels. He talked about camels… or at least a single camel. This is important to me, because camels are my favorite animal—impossibly cool. And when Jesus talks about them, he talks about their impossibility—namely, that it’s easier for a camel to fit through the eye of a needle than it is for the rich to enter the Kindom of God.

Believe it or not, there’s a Methodist Church in Dumont, New Jersey that has this saying portrayed in one of its stained glass windows. The needle is really big and the camel is quite small, but it’s clear it still won’t fit.

But we want it to. There’s even a gate somewhere in the holy land that is called the Needle’s Eye. This gate is so small that if a camel is to pass through it, all its baggage has to be unloaded first. And even then, the camel has to enter through it on its knees. It is said that Jesus was referring to this gate when he uttered this saying about the rich. What he meant was that for the rich to enter God’s Kindom, they must first unload their riches, and then humble themselves before God.

This is a great illustration, and we’ve probably all heard it. But the truth is that this gate probably never existed.

Another possibility is that the Greek word for camel (κάμηλος) was a typo. Change one letter, and you’ve got the Greek word for rope (κάμιλος). It sounds much more feasible (and much less gory!) to get a rope through the eye of a needle than to get a camel through one. But, once again, this misprint is highly unlikely—especially since it would have to have occurred in three different gospels. It’s best here to simply take the words as we have received them, and fit our lives to what Jesus said, rather than trying to fit what Jesus said to our lives.

It’s important here to point out that we cannot see the rich young ruler’s heart. We only know him by what Matthew, Luke, and (especially) Mark tell us about him. We have every reason to believe that he was telling the truth when he said he’d always obeyed God’s commandments. But Jesus taught us that God’s love was only imperfectly reflected in blind obedience. God’s love for us also needed to be reflected in the way we trusted God and the way we loved our neighbors.

And so the rich young ruler showed us the beginning—that is, obedience to a set of rules. But he was unable to accept that state of wholeness that comes with love and trust. He didn’t need to give up his possessions to pay his way into the Kindom. He needed to let go of these things to have room for the wholeness that God was offering him. As long as he depended on his wealth to make it in life, and as long as he looked to his possessions to understand his identity, there was no room left for God.

Jesus offered him a choice between being a citizen of the world as he knew it, or a citizen of a Realm defined by God. And he was unable to look beyond the one he understood at that moment.

The disciples seemed to be surprised that a law-abiding rich man could not make the transition from the old world to the new one without major changes. And we have to admit that we also don’t like the implications of what Jesus is saying here. But the “ask” is there for all who want to take part in the new world that Jesus has opened up—a world of love and peace and trust.

It may not always be possessions… but let’s admit that it probably is more often than we want it to be. But whoever we are, there’s something that we need to turn our backs on—or at least put in the back seat—if we want to experience the full salvation (the wholeness) of God.

I know it seems impossible to “let go and let God,” as some of our friends tell us. And it is impossible for us on our own. But for God, nothing’s impossible, because for God, all things are possible.
—©2021 Sam Greening, Pilgrim Christian Church