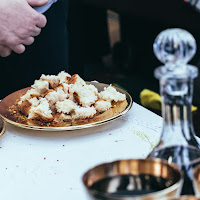 The first Sunday of November is for us All Saints Day. We observed this holiday by naming those who have died over the course of the past year. The songs we sang reflected this theme:
The scripture read was from the beginning of Revelation 21, and the title of the sermon was  As Good As Done. Below you will find a complete video of the worship service, and beneath that is a transcript of the sermon in its entirety.

As Good As Done
It is done! I am the Alpha and the Omega, the beginning and the end.
—Rev. 21:6a
Have you ever looked back on your life and regretted not doing something? I would imagine that that’s part of the human condition—that we’ve all done that—but maybe I’m wrong. But the fact that we have the saying, Strike while the iron is hot, must mean that somebody somewhere must’ve waited until the iron was cold before striking and regretted it.

What I’m thinking about today is the sort of regret that comes with having a chance of buying stock in a company that’s just gone public and passing on it—only to find out that it’s now worth a fortune. Or maybe not buying property at a rock-bottom price, just before the market explodes and that same house now doubled or tripled in value.

It doesn’t have to be about money or possessions, though. Not everything is. Maybe it’s a relationship you didn’t act on. Maybe you could’ve furthered your education, and now it’s too late. Or maybe you had a chance to go to a beautiful but unknown spot on the map, and you put it off… but now it’s an overcrowded tourist trap. There are a million different ways we can look back and say, If only I’d struck while the iron was hot, or, If only I’d gotten in on the ground floor.

One place we don’t have to worry about it—one area of our lives we never need to regret—is our religious life. Or at least that’s what I thought until I heard the end of today’s scripture reading. We read all these wonderful promises, straight from God. But then right after we read them, we hear the voice of God saying, It is done! We’re too late. We didn’t strike while the iron was hot, and now we’ve missed out. It’s already over.

And John’s revelation was pretty fantastic: the city of God descending to earth; no more pain, no more tears; a personal relationship with God; all things new. The promises made in John’s vision were nothing less than the fulfillment of the very hope Christ had instilled in his followers.

But whatever it was, it’s done.

Except that’s not really true. John saw and heard it. And God pronounced it done. That doesn’t mean we experience it as complete. That means it’s completed in God’s mind. But God is not tied, as we are, to time and place. If God says it, it’s as good as done. Tied as we are to clocks and calendars, we’re impatient and easily discouraged. That’s where faith comes in… or perhaps trust is a better word, a less challenging word. If God has promised tearless faces, an end to pain, a new heaven, and a new earth, then we can trust that what’s real in God’s eyes will someday be visible to our eyes, too.

The Lord’s Supper is probably the best way possible for us to relate to how this works. We know what we do here. We eat a small bit of bread and drink a sip of wine (or grape juice). Worldly eyes might look on scornfully and think the entire church of Christ deluded. But in this supper, people of faith taste and see the very goodness of God and take part in an eternal feast and heavenly banquet.

For, as the Apostle Paul said (1 Cor. 11:23-26), I received from the Lord what I also handed on to you, that the Lord Jesus on the night when he was betrayed took a loaf of bread, and when he had given thanks, he broke it and said, “This is my body that is for you. Do this in remembrance of me.” In the same way he took the cup also, after supper, saying, “This cup is the new covenant in my blood. Do this, as often as you drink it, in remembrance of me.” For as often as you eat this bread and drink the cup, you proclaim the Lord’s death until he comes.

These are among the most repeated words in the history of the planet. They have been spoken here for thousands of years, and heard by billions of people. The reality they speak into existence is experienced firsthand by the saints of God who have gone before us.

During the lockdown, exactly a year ago on All Saints Sunday of 2020, I shared a film clip during one of our worship services. It was the final scene of a movie called Places in the Heart. It was filmed in a church much like ours. And like our sanctuary since we’ve resumed worship, it looked to be no more than half full. Social distancing would’ve been easy for them, though it was set in the 1930’s so it wasn’t necessary.

As the worship service progressed, they passed the bread and the wine through the pews, just as we do, saying to one another, “The peace of God.” But as communion continued, something strange happened, and you don’t notice it immediately. You begin to realize that there are no empty seats during the Lord’s Supper. All the spaces seem to be filled. And you also realize that they’re filled with people who weren’t there earlier in the service. People who have left town, even people who have died are present. They, too, take part in the Supper.

And so it is with us. When we share in the bread and the cup, the spaces between us are no longer empty, for the banquet we’re taking part in isn’t limited to the here and now. God’s love is an ever-present reality, the grace of Jesus Christ is eternal, and the unity of the Spirit is not limited to those who are near to us physically. The church of God is made up of people sitting in pews and on benches and on the ground, people standing outside the doors all around the world, those who are here, those who have gone before, and those who are yet to come. God holds us in an eternal now. And the promises that we strain to believe in are, in reality, as good as done. For the words that God speaks are trustworthy and true, even if we do not yet realize them.
—©2021 Sam Greening, Pilgrim Christian Church