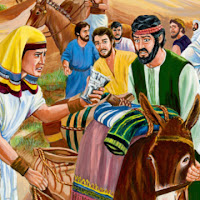 The scripture lesson today came from Romans 8, beginning with the verse, All things work together for good... The sermon text came from the end of the Book of Genesis, which tells the story of Joseph. Our hymns included Our God, Our Help in Ages Past, and My Life Goes On. Steve Moore was presiding elder.

Here is a video of the service in its entirety (click "read more"). Beneath the video, you will find a complete written transcript of the sermon.

Joseph & His Brothers
Do not be distressed, or angry with yourselves, because you sold me here; for God sent me before you to preserve life.
—Genesis 45:5
They were proud and they were free, these men who lived thousands of years ago. And compared to other nomads, they were wealthy. Or at least they had been before the whole region was struck by famine. You can’t eat money, and so they had to go begging.

The men I’m talking about were brothers. There were ten of them in all, sons of a man named Jacob and his wife Leah. Obviously their clan was a huge one, once you began counting spouses and children and servants and everybody else. And though they were respected by all the other nomads because of their strength, the whole bunch of them was considered a bit eccentric. They didn’t have the same beliefs as everybody else in the region. They didn’t worship the gods or make the same sacrifices. They were a proud bunch, but when no rain came, when there was no food, and their flocks were dying, they had to do something.

They heard there was food in the great empire to the southwest—the land of Egypt. And so Jacob sent his ten eldest sons to buy grain from Pharaoh. His prime minister was apparently the wisest man on earth, and though the rest of the world was starving, he had somehow stored away enough grain to feed all of Egypt—and others beside—years into this horrible famine.

As well off as they were, once the brothers arrived in Egypt, they realized their riches were nothing in comparison to what they saw around them. Hat in hand, they appeared before this great man, this prime minister. And they spoke to him through an interpreter: they were speaking Hebrew and he was speaking Egyptian. This great man was oddly curious about their family. So they told him what he wanted to know.

And then he accused them of espionage, and had them thrown in prison. After three days he sent for them again: “If you’re not spies,” he told them, “then after I set you free you’ll return to me with your youngest half-brother. But just to be sure, I’m only letting nine of you go—the tenth will stay here as my hostage. The one chosen to stay in Egypt was named Simeon. Reuben, the eldest, led the others home to Jacob, weighed down by the bags of grain they’d bought.

Their troubles continued though, when they opened the bags and discovered the money there that they were supposed to have paid for the grain. “Pharaoh’s minister is going to think we stole it back!” they said. And so they didn’t go back with their little brother, Benjamin, to ransom Simeon, so sure are they that they’d be arrested—and probably enslaved.

The thing with a few bags of grain, though, is that they don’t last long. Jacob tries to convince his sons that they need to return to buy more. So they explain to him about the money they discovered… and about the fact that they have to return with their little brother. Jacob doesn’t want to do it, but realizes that it’s better to take a chance than to watch all his sons starve. And so the brothers—including young Benjamin—depart. Though they’re frightened, they’re also desperate.

And when they get to Egypt, they’re not sent to some office or public place, but directly to the home of the prime minister. This is bad. Is he so angry that he can’t wait to punish them?

They get there, and instead of immediate arrest, they’re seated for a meal—a feast, really. But when the prime minister finally enters the dining room, he is visibly upset with them… so upset that he ends up leaving the room. But he still gives the brothers the best food imaginable, making sure that the youngest gets more than anyone else.

They’re all sent back to their father and each of them is loaded down with bags of grain. But before they even leave the country, they discover a silver cup in one of Benjamin’s sacks. This is worse than when they found the money—the cup is priceless!

Judah had promised his father he’d be responsible for Benjamin, so he takes the cup back to the prime minister. The man tells him that this was serious, but that only the one in whose sack the cup was found would be held responsible. (What Judah doesnb’t know is that the minister is the one who had the cup placed there in the first place.) The others were free to go, but Benjamin would have to stay behind. Judah tried to argue, but the minister became so upset that he sent everyone but the brothers from the room. And then he began to weep. He wept so loudly that the whole building could hear him.

And finally he said, between his sobs, “I am Joseph.”

It was a few moments before the brothers realized he was no longer speaking Egyptian, but their native Hebrew.

Joseph, he said. And that was a name that meant a lot, for they had a brother named Joseph whom they hadn’t seen for fifteen years. Joseph—born of their father’s other wife, Rachel—had been their father’s favorite, and they were jealous. They also found Joseph to be arrogant. And after Joseph had told him of his dreams—dreams in which his brothers bowed down to him—they became so enraged that they took him away with them and sold him into slavery. Then they told their father he’d been killed by a lion.

Was this the same Joseph? If it was, they were doomed. How could they have imagined that a teenager sold to slavers would end up as one of the most powerful people in the greatest country on earth? But Joseph’s righteousness and wisdom had enabled him to climb the ladder of success until he became Pharaoh’s right-hand man. And here he was, finally able to exact his revenge on his wicked brothers.

“I am Joseph,” he repeated, “the one you sold into slavery. I know you’re scared, but don’t be. Nothing that’s happened has been outside of God’s plan. I’m here to prepare a place for you to survive this famine. I know you think that you tried to destroy me, but you were actually saving our family.”
-------------------------
I cannot read the story of Joseph and his brothers without thinking about Paul’s words in Romans 8: We know that God causes everything to work together for the good of those who love God and are called according to his purpose for them. The empty tomb, the cross, the birth of Christ, the Promised Land, the Exodus… everything good that has happened can be traced back to the horrible moment when ten jealous brothers thought they were getting rid of their father’s favorite.

In the 3000-year-old story of Joseph, we see something new being brought into a world. We see the birth of faith—not just a belief that a god exists, and if we say the right things, perform the right rituals, make the right sacrifices, that god will notice us and do us a favor. We see the birth of a belief that whether or not we like what happens, God loves us and is at work to make things come out right. It might take years, it might not even happen in my lifetime. But we can trust that God loves us and will not abandon us.

I admit that I’ve heard from many who do not share my faith—including some who are openly hostile to it—that my trust in God to get it right, even when things look bleak, is problematic. How can I find the positive in the midst of the negative? How dare I seek good in evil? And for that I have no good explanation, except to say it’s what I’ve experienced, and it’s what I read about in the scriptures.

And that really is one of the reasons the Bible tells us over and over again about the events of the past. It’s not because that’s where we’re supposed to live. It’s because, when we realize all that is possible and all that has been done in the past, we can trust God to get us through the difficulties of the present; we can trust God with our future.

There were many times when it looked like the Patriarch Joseph’s story must surely come to an end. There have been many more times when it has looked like the history of Israel must have reached its conclusion. And in the story of Christ, death on the cross was as certain an end as has ever been reached in this world.

But God is not tied to this world, nor to this time, nor to our idea of what is possible. God does not shut down in the face of overwhelming power. God is not thwarted by evil. And God can use troubles as raw materials for blessings. That is why we can say that all things really do work together for good for those who love God, and who respond to God’s call in their lives.
—©2022 Sam L Greening, Jr.