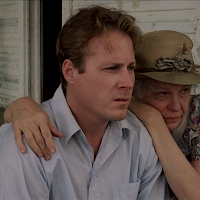 Today was the Fourth Sunday in Lent, and the gospel lesson was the Parable of the Prodigal Son. We sang two hymns today: Great Is Thy Faithfulness and Softly and Tenderly. The latter song was also sort of the theme song of the 1985 film The Trip to Bountiful, for which Geraldine Page won an Oscar, and this film was one of the main illustrations in the sermon. After the sermon, we prayed Psalm 32 responsively as a prayer of confession.

Here is a video of today's worship service (click on "read more"), and beneath that is a transcript of the sermon.

His Bountiful Home
But when he came to himself he said, ‘How many of my father’s hired hands have bread enough and to spare, but here I am dying of hunger!
—Luke 15:17
Many of you probably know that last hymn. But probably fewer every year. It’s an old revival hymn that probably used to get sung a lot at tent meetings. It’s designed to manipulate people’s emotions in order to get them to commit their lives to God. I suspect it’ll soon disappear from the hymnals of churches like ours. So we may be the last generation that sings songs like Softly and Tenderly.

I’ve probably told you that I sing to myself a lot. I’m always surprised to find out that most people don’t. I guess I’ve lived alone too long. But I never find myself singing Softly and Tenderly, unless maybe I happen to be flipping through the hymnal and the title catches my eye. But one thing is guaranteed. When I do notice it in the hymnal, I am reminded of one of my favorite movies.

The film is called The Trip to Bountiful. It stars Geraldine Page as an elderly woman named Carrie Watts. She lives in the 1940’s in a tiny apartment in Houston with her son, Ludie, and his wife, Jessie Mae. It’s clear that nobody’s satisfied with these living arrangements. And Jessie Mae in particular makes her impatience known to Mother Watts. She has a whole laundry list of things she doesn’t like about her mother-in-law, but near the top is Carrie’s habit of singing hymns. Hymns get on Jessie Mae’s nerves. She says they’ve gone out of style. And Jessie Mae is nothing if not stylish.

Of all the hymns she knows, Carrie Watts’s favorite is Softly and Tenderly. I think that’s because it was her father’s favorite. She hums it several times during the film, and a beautiful rendition of it is sung during the opening credits.

The main plot of The Trip to Bountiful is Carrie’s desire to get out of Houston. You see, she’s not from the city. She’s from a town on the gulf coast named Bountiful. And all she wants is to return there. And one day after her son leaves for his job and Jessie Mae has gone shopping with a friend, she sees her chance. She first goes to the train station, only to discover that no trains go to Bountiful anymore. Indeed, the ticket agent’s never even heard of the place. Then she goes to the bus depot. No buses go to Bountiful, either. So she buys a ticket to Harrison, which is a few miles away.

The journey there, as the name of the movie indicates, is what takes up much of the story. And she does eventually make it to her old homeplace. There she discovers a ghost town. Bountiful’s last resident had died just a few days earlier. All that’s left is a bunch of empty buildings and fields returning to their natural state.

As she’s exploring her decrepit old house, Ludie and Jessie Mae drive up to fetch her home. Jessie Mae stays in the car, but Ludie goes to his mother. The time for anger and blame is past, and so Ludie and Carrie have an honest talk. Carrie remembers so many things. Ludie says he remembers nothing. But finally he admits that that’s not true. “Mama, I lied to you,” he says. “I do remember. I remember so much… [but] I want to stop remembering. It doesn’t do any good remembering.”

We never learn all the backstory, but it’s clear that life has been hard on Ludie. Yet somehow going to his former home and finding his mother there changed him. You could see it in the way he spoke and the way he held himself. He’d thought the place where he’d come from was a big waste of time. But it was there that he found himself. Carrie Watts once thought she wanted to return to Bountiful to live out her days. In the end, it was enough to know that Bountiful still lived on in her son.

Like Ludie in the movie, the younger son in today’s parable wanted to get away from the old homeplace. But unfortunately for him, his family had money and his father was generous. And so when he asked for his inheritance early, he got it. And he went to the big city and lived it up. Then, when the going got tough, he lost everything—his money, his dignity, even his own sense of self.

The job he ended up with was more degrading than the work of even the most menial of his father’s employees. But he did it, even though the pigs were eating better than he did. Until one day when he came to his senses. “Wait a minute,” he said, “my old home is so bountiful, my father is so generous, that even the servants live like kings compared to this!” And so he resolved to go home. “I’ll admit to my dad that I’ve done wrong. ‘I know I don’t deserve to be your son,’” he planned to say, “’but can I at least work for you?’”

We all know what happened next. Before he could even make it home, he found out his father had never ceased watching and waiting for him. And when he caught a glimpse of the old man in the distance, it wasn’t a silent, stationary figure he saw, but an old man shouting and running toward him. When his father grabbed him and hugged him, he started to speak the confession he’d planned. But he could barely get the first sentence out before his father forgave him. He had returned to be a servant, but he’d been restored as a member of the family.

In a way, the younger son’s fall from grace was itself grace. If it hadn’t been for his mistakes, he could never have experienced the joy of homecoming and forgiveness. The older son, who’d never strayed, could only respond with resentment. Not only did he not know the joy of restoration, he couldn’t find it within himself to be happy for the father he said he loved.

This beautiful story of homecoming works on so many levels to help us understand the unconditional love of God. Those of us who have had loving parents and the security of a home can easily relate to it. It seems almost like the perfect parable of grace. But not everybody has experienced this love. And for some, the thought of “home” only reminds them of rejection or abuse.

But the story isn’t really one about the relationship shared by this parent and child. It’s about the love God holds out for a child of God—a love that crosses distances and covers wrongdoings, a love that forgives before a confession of sin can even be completed. It’s also a story that affirms a person’s self-worth. In the movie, Carrie and Ludie realize that Bountiful lies within them, and though the whole town be wiped off the face of the earth, its gifts to them will still be part of who they are. In the parable, the young man stoops to the lowest level in his life and then discovers something within himself that’s worth something—that’s worth keeping alive.

Within each one of us is implanted the Image of our Creator. Some theologies tell us that that Image was obliterated in the fall—that sin has destroyed the sense of the Divine within each person. But I hope none of us believes that. Yes, the Image of God is marred in each of us, for—as the scriptures remind us—all have sinned and fallen short of God’s glory. But God does not abandon us, and God’s Image—even though it may be covered up with layers of other stuff—never ceases to abide in us. The sense of self, of wholeness, of the bountiful grace of God calls to us still: There’s something more than we’re currently experiencing; in the embrace of God we can find what has been lost, and come into possession of who we truly are.
—©2022 Sam L. Greening, Jr.