Patron Saint of the Starving 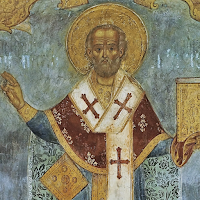 Those who oppress the poor insult their Maker.
✙ Proverbs 14:31
✙
History is a strange thing. We often know the stories of tyrants, those who oppressed the poor and insulted God. But we seldom know about those who honored the least among us. One such figure is one of the most famous people in the world, but we never talk about his actions to help the needy.
✙
The man in question is Saint Nicholas—known to most of us as Santa Claus. Nicholas was a bishop in what is now known as Turkey. He had a reputation as a passionate advocate for the Christian faith. He was just as passionate as an advocate for the poor. In fact, Nicholas is known in some circles as the patron saint of the starving.
✙
One of the most famous stories of Nicholas' concern for the poor happened in Myra (his hometown) during a famine. A ship docked there on its way to Constantinople with a load of wheat. Bishop Nicholas asked that some of the wheat be taken for distribution to the poor, but the sailors refused. But when Nicholas promised them they wouldn't be punished for theft if they shared with the poor, they finally consented. When the ship arrived at its destination, the sailors discovered that the ship contained just as much wheat as it did before it docked in Myra. Yet the amount shared with the starving was so significant that it not only fed them but provided enough seed for planting for two years.
✙
When the scriptures call on us to care for the least among us, we're not being asked to do the impossible. It's all been done before. The only thing being asked of us to share what we already have: resources, time, voice, love—we've all got something to give.
✙
Truly I tell you, just as you did it to one of the least of these who are members of my family, you did it to me.
✙ Matthew 25:40
✙

✙
Make us worthy, Lord, to serve our fellow [humans] throughout the world who live and die in poverty and hunger. Give them through our hands this day their daily bread, and by our understanding love, give peace and joy.
✙ Teresa of Calcutta
✙