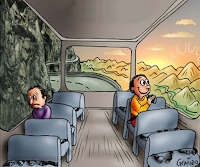 Last week, we worshiped at Big Creek Park and our music was provided by the Chardon Polka Band. Next week, worship will be at Mountain Run Station and our music will be provided by Pilgrim Brass. Today, however, we were in our own sanctuary for installment five in the Fruit of the Spirit sermon series. The theme was Kindness. Below is a video of the complete service (click on "read more") and beneath that is a transcript of the sermon.
Fruit of the Spirit 5: Kindness
Today we return to this sanctuary for one week between forays into the great outdoors. So it’s appropriate that this one solitary week indoors marks the halfway point in my Fruit of the Spirit sermon series: No. 5 out of 9. And I think if I could have advised the Apostle Paul on which of the fruits should take this central position, I’d have told him Kindness, the very one Paul—all on his own, apparently—placed right in the middle.

Love, I agree with Paul, belonged at the beginning. If any of the nine fruits is the most important, it’s definitely love. But if we’re talking about the fruits as I think Paul intended us to, then I don’t think anyone could argue that kindness isn’t the one on which all the others depend. Back in the days before they had cement, if somebody was building an archway in a wall, they’d have needed a wedge-shaped stone to put at the top that would lock into place all the stones on either side of it. This was the keystone. And so Kindness, I guess you could say, is the Pennsylvania of the fruits of the Spirit. It’s the keystone, because without kindness, none of the others hold up.

And kindness, more than any other principle, is the way I think most of us want to conduct our everyday lives. It’s probably been that way for time immemorial. I’m sure this is true of everyone who even pretends to care about others. But I think it’s especially true in small communities like ours. But even here, I think our kindness is tested during these trying times… and I don’t really see things getting any easier.

Think about it. There was a time in the living memory of most of you when just about everything was local. When you went shopping, you probably knew most of the shop owners. You probably also knew most of the employees who waited on you. You often knew their names. You knew who their families were. You knew where they went to church. Maybe they even went to your own church. And if you didn’t know much about them, you certainly knew their faces. They were the ones who served you—usually with a smile—every time you went to a particular store, or mechanic, or restaurant, or dry cleaner, or whatever.

It's easy to be kind under those circumstances. It’s good for the other person’s soul. But it’s also good for your soul. But things are different today, aren’t they. Yes, we do still often encounter the same people in the same shops and restaurants and we do still sometimes know the owners—especially when you’re right on or next to the town square. But most of the time, local businesses aren’t local. They’re part of big, anonymous corporations. There’s a lot more turnover in the people who work for them. And as often as not, they come in from Lake County, or maybe Cuyahoga. Or, maybe the stores you shop in are outside Geauga County. Something tells me that just about all of us still try to be kind to the people we deal with on a day-to-day basis, even if the experience isn’t as personal as it used to be. But it’s not quite the same, is it?

To make things worse, many of our dealings aren’t even face-to-face anymore. How often do we need help with our computer, or have an urgent problem with one of our accounts, and so we do the only thing we can do: We call the number provided. And the voice at the other end usually speaks with an accent that’s very difficult for us to understand. It’s easy to lose patience, isn’t it? And if we’re not careful, impatience quickly leads to unkindness. We forget that the person at the other end of the phone is no less human than we are. It’s their job at a call center that barely allows them to eat or pay rent. Without it, they might be destitute. And so before we make a phone call these days, perhaps we, as followers of Jesus the Christ, need to do what Paul says in Colossians 3: Put on kindness.

I’ve been stressing throughout this sermon series that the fruits of the Spirit aren’t the gifts of the Spirit. We receive gifts whether we’re worthy of them or not. But fruit is what we bear as a result of our Christian way of life. They are choices we make in the way we deal with others. We can choose to treat people lovingly, even when we don’t love them. We can choose to view something positively, even when our gut reaction is to view it negatively. We can choose kindness over unkindness, even when we can’t see the face of the person we’re talking to, even when they don’t speak with our accent, even when they live on the other side of the world.

This isn’t just me talking. And it’s not even just Paul writing. This is a core teaching of Christ. It’s what we learn from one of Jesus’ most important stories: The Parable of the Good Samaritan. Jesus teaches love for neighbor, and so someone asks him, “But who’s my neighbor?” Jesus then told the story of a man who was dying on the side of the road. The good people of the dying man’s same religion went out of their way to avoid him. But a man who looked different and acted different and prayed differently stopped and did all he could to help him. “Which one was his neighbor?” Jesus asked. And the answer was clearly: The one who the dying man had always thought of as the stranger, the foreigner, the one to be looked down upon. When we clothe ourselves with kindness before exchanges that might trigger unkindness in us, then we are preparing ourselves to hear a neighbor in the voice of a stranger.

We can choose love or kindness or happiness. And that’s why I included a picture on the inside of this morning’s bulletin (see top of post). It’s a picture I’ve seen a million times online. It’s from almost ten years ago, and it was drawn by a Brazilian cartoonist. “Sometimes it just depends on us,” he labeled it. And I think it perfectly reflects my sermon of a few weeks about joy being a fruit of the Spirit. I said then and I still believe that we can choose happiness. But in order to truly understand kindness, we must also realize that not everybody has that freedom of choice.

Well, a lot of people are told they’re not allowed to move. Maybe the seats were assigned and the seat he bought was all he could afford. Maybe he’s not mobile and would need help changing seats. Or maybe he’s too depressed to think about the move. When we think about kindness, we need to remember that we put on kindness not only for those who are kind to us first—those who are cheerful and easily understood, those we can relate to. We must also remember to be kind, for everyone you meet is fighting a hard battle (Rev. Ian Maclaren, 1850-1907).

A month or two ago, I read a wonderful novel that reminds me of what all this means. It was called The Secret Life of Albert Entwistle, by Matt Cain. The subtitle of the book was An Uplifting and Unforgettable Story of Love and Second Chances. It was about an English letter carrier who was being forced to retire due to his age. Life had been unkind to Albert when he was young. And so he responded to life by avoiding connections. He cared for his aging mother until she died. He cared for his cat until it died. And he did his job, dutifully avoiding any meaningful relationships with either the people he worked with or the people he encountered along his mail route.

So I’ll close with a verse of today’s scripture reading: As God’s chosen ones, holy and beloved, clothe yourselves with compassion, kindness, humility, meekness, and patience (Col. 3:12). The fruit of the Spirit isn’t necessarily something we’re born with. It might not even be a part of our nature. Sometimes we have to consciously put it on so that we’re better prepared to treat people as Christ would treat them, and so that we’re also better able to receive the kindness of others as well.
—©2022 Sam L. Greening, Jr.