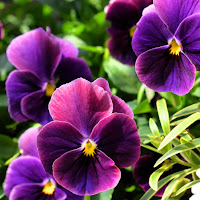 Today's them was the eighth fruit of the Spirit: Gentleness (sometimes translated meekness). The devotion at the beginning of the service was about the third beatitude, and quoted from J. Ellsworth Kalas's Beatitudes from the Back Side. Our music included the traditional hymns Rejoice, You Pure in Heart and Jesus, the Very Thought of Thee, along with a newer hymn about service in the Name of Christ called Jesu, Jesu. Below you'll find a video of the entire service (click "read more"), followed by a transcript of the sermon.

Fruit of the Spirit 8: Gentleness
Paul lists nine fruits of the Spirit in the fifth chapter of Galatians, and today we’ve reached number eight. In Greek, this one’s called πραóτης, and the most common translation of this word is gentleness. The second most common translation—and this one’s especially popular in older versions of the Bible—is meekness. Coming in at number three in popularity is humility. Today we’ll stick to the top two: gentleness and meekness. It’s easy to see how these two words mean the same thing, but the way I think about it, gentle is the word I might use in everyday conversation, while meek is more of a theological word.

Meekness in the scriptures is almost always a good thing. The first two references I think of, in fact, are overwhelmingly positive. One of them’s from the Old Testament and the other from the New, and they say almost the exact same thing. First there’s Psalm 37:11, which tells us that “the meek shall inherit the land, and delight themselves in abundant prosperity.” Then there’s Matthew 5:5—near the very beginning of the Sermon on the Mount—when Jesus says, “Blessed are the meek, for they will inherit the earth.”

Both of these are lovely sayings. But I fear we don’t give them enough thought. I don’t know how it was for the ancient Hebrews—or for the Jews of Jesus’ day—but in our culture, we are not taught to be meek. We’re usually taught the opposite, in fact. We’re taught to stand up for ourselves. We teach our kids to stand up for ourselves. The meek have trouble merging in traffic. The meek are likely to lose their place in line. The meek get scammed. But both the psalmist and Jesus declare them blessed. Why is this?

I think the answer’s kind of obvious. But in case it’s not, remember that the Bible was not written for the proud or the powerful. For most of its history, Israel was the underdog. The scriptures were intended, first, to give them an identity and knit them together into a people. But, second, the words of scripture were intended to assure the downtrodden that they were not forgotten. Sometimes these words were addressed to the entire nation. And sometimes they were addressed to those within Israel who were the outcasts of their own society.

And so when the psalmist reminds them—and everybody else—that their lives weren’t meaningless, that God still had plans for them, promises to be fulfilled.

By the time Jesus came on the scene, Israel’s glory days as a world power were far behind them. If this was true in Judea and Jerusalem, then how much more true it was in Galilee where Jesus was from? Of those who followed Jesus early on, the majority of them (maybe all of them!) were those who were most likely to lose their place in line. They were the meek. And so when Jesus repeated a promise found in the psalms—that the meek would inherit the land—then they would have heard this beatitude in a very different way from what we do. What they would’ve heard was that here was a Teacher who believed that this world wasn’t just a playground for the powerful, or that wealth wasn’t a sign of God’s blessings, but that God loved the poor and the persecuted and the meek—that God had promises for them, too.

So the same Greek word that’s translated as gentleness in the list of the fruit of the Spirit is the same one that’s translated as meek in the Beatitudes. And it’s the same word that James used in today’s scripture reading, when he said, “Welcome with meekness the implanted word that has the power to save your souls” (Jas. 1:21). And that’s the key this morning to understanding this word as one of the fruits of the Spirit.

If we think about that verse, then we have to admit that what it’s saying is pretty obvious. God’s message has been planted within us. And if we hope to embrace it, we have to do so with a certain attitude. And what attitude would that be? Would it be an attitude of power? If the word has the power to save us, then thinking we have power over the word is nonsense. How about an attitude of pride? Once again, if it’s the word that saves us, then pride in ourselves is going to be counterproductive.

The attitude James tells us we need is an attitude of meekness or gentleness. And when you think about what he’s saying, it’s clear that this is the only attitude that will work if our goal is to welcome the word. Pride or power will always get in the way of the message. Any sort of selfishness that’s in control of me would make it basically impossible to hear what God wants me to hear or to understand what I’m supposed to understand. But meekness or gentleness or humility—these allow me to understand that I don’t know it all and that I’m not in charge of God’s message.

Sometimes this is obvious. There’s so much anger out there right now that people’s minds go straight to vengeance when they feel they’ve been wronged. Think about it. You’re on the interstate and somebody cuts you off in traffic. Now chances are nearly zero that this other driver knows you and actually did this on purpose. But there are so many people these days who think that retribution is necessary. This is so common we actually have a term for it—a term we all know. It’s called road rage. And though we might joke about it, it’s extremely dangerous—sometimes even deadly.

Christians can’t really engage in this behavior, because the fruit of the Spirit is gentleness. When somebody cuts us off in traffic or refuses to yield to us, the gentle way of responding is to simply hold off, or slow down. Getting back at them makes no one safer, and it doesn’t solve any problems. It simply creates more anger in a world that’s already too angry.

And as common as road rage is, there’s an arrogance in everyday conversation in our culture that is much more dangerous to us all. The idea that listening to somebody we might disagree with is a sign of weakness, that even the hint of compromise is wrong, has ruined relationships and tied our country in knots. If we instead reminded ourselves that the fruit of the Spirit is gentleness, we could listen to one another, or simply avoid that which we knew would cause animosity.

Maybe when I mention this, our minds automatically turn to politics. But it’s also true of religion. Jesus loved people and listened to them. Unless he knew somebody was a stubborn hypocrite, Jesus only ever used gentleness to deal with people—even people he disagreed with. I hope this is the way most of us deal with others. But we know that churches can be as bad as anyone else when it comes to a refusal to be gentle or meek or humble.

If it’s true that the other fruits of the Spirit are a matter of choice—of practice become a habit—then how much more true must this be of gentleness. We can train our minds and our hearts to respond to difficulty with gentleness. We listen. We forgive. We choose mild words to respond to angry ones. And just as we cannot welcome God’s word with an attitude of arrogance, so we cannot embrace a brother, a sister, a neighbor, or even an enemy if we do not adopt an attitude of gentleness or humility. The Kindom of God may exist all around me, but I cannot enter it if my attitude places me above others.

The fruit of the Spirit is, indeed, gentleness or meekness. The Bible tells me that the real future lies in the hands of the meek. So may we prepare for the future by being gentle in all our dealings.
—©2022 Sam L. Greening Jr.