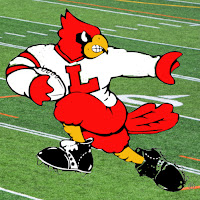 1. Louisville Cardinals
This past Saturday was Week 0 of the college football season, so several early games have already taken place. But for the Louisville Cardinals, the season begins this coming Saturday with an ACC matchup against Syracuse. As is my custom, I'm ranking the fight songs of Louisville and its twelve regular season opponents from best to worst. Starting off at No. 1, here is the song voted "The Best in the World" by everybody and their mother's cousin...
University of Louisville's Fight, UofL!
2. Clemson Tigers
Because most of our schedule consists of the same teams year in and year out, I've changed my criteria this year in order to create a bit more variety. The main way this is happening is that I'm not penalizing teams for lack of originality. This moves Clemson's Tiger Rag from near the bottom to very near the top. Though it's not unique to Clemson University, their band's performance of it is one of the most stirring in college football. So at No. 2, here's The Tiger Rag:
3. Virginia Cavaliers
The University of Virginia has two main fight songs. I have sometimes in the past ranked their most popular one (The Good Old Song) in my annual fight song post. And since it is just a knock-off of Auld Lang Syne, it usually ranks quite low. But this year I'm using what I think is their official fight song, the Cavalier Song. It's an excellent example of its genre, and comes in at No. 3. Interesting fact: when the ACC switches up its scheduling method next year, Virginia will be our only current annual opponent that we keep playing every year. The other two that we'll play annually will be Georgia Tech and Miami, whom we now play only about once every six years. Our other six annual opponents will be played on an every-other-year basis.
4. Kentucky Wildcats
This next fight song is one that I in the past have ranked near the bottom. It belongs to my team's archrival, and it shares its tune with my high school (Paul G. Blazer's Ashland Tomcats). It's been moving up in the ranks, however, and this year, I'm able to step back, appreciate it more, and rank it at No. 4. So here's Kentucky's On, On UofK! Kentucky is the only non-ACC team which the Cards play every year, and I hope that continues in the future after the SEC expands to 16 teams and they play a 9-game conference schedule (as opposed to the current 8-game schedule).
5. Pitt Panthers
Though Louisville's in the same conference as Pittsburgh, we're in different divisions, so we seldom play each other. 2022, therefore, is an exception... for now. (This will change in 2023 when we begin playing them every other year.) Anyway, I've never quite been able to figure out which of Pittsburgh's two most popular fight songs is their main one. Here's a video with both songs, and the first one, the Pitt Victory Song, is the one I think is the official main fight song. The second one, Hail to Pitt, is (in my opinion) the better song. But my ranking this year is based on the the Pitt Victory Song, which comes in at a respectable No. 5. (The last time we played Pitt, I ranked the other song at No. 2.)
6. Wake Forest Demon Deacons
Next year, when the ACC changes its method of scheduling, instead of 7 annual opponents, we'll have only three. This means we'll play the other ten members of the conference every other year. I hate to say it, but the team I am most anxious to see gone from our annual football schedule is Wake Forest. I do respect the university, however, and in the past, I have ranked their fight song as high as No. 2. I guess I'm just a little tired of it by now, but it still ranks in the top half. So coming in at No. 6, I present Here's to Wake Forest, one of college sports' more unique fight songs.

7. Boston College Eagles
It is said that Boston College's fight song, For Boston, is the oldest of all fight songs. I often rank it higher, but a change in criteria—as well as familiarity—places it somewhere in the middle this year. It's a great tune with classic lyrics, though, and here it is at No. 7. We've been playing BC yearly for a while now, but next year, they're one of the six annual opponents that will move to an every-other-year basis.
8. Syracuse Orange
Another true classic as far as fight songs go is Syracuse's Down the Field. Though it's ranked in the bottom half, it's still a great song. Here it is at No. 8. On a personal note, I am disappointed that, starting next year, Syracuse will no longer be one of Louisville's annual opponents, but instead we'll play them every other year.
9. N.C. State Wolfpack
Though North Carolina State's fight song is ranked relatively low, it's still a pretty stirring song. Believe it or not, it has been ranked consistently lower in the past, but my change in criteria has allowed it to climb the ranks a bit. As great as this song is, I associate it not with N.C. State, but with The Army Goes Rolling Along (the U.S. Army song). But I didn't allow that fact to influence my ranking this year. So here at No. 9 is the N.C. State fight song, which is sometimes referred to as Red and White (which is curious indeed, since neither of those words are found in the lyrics).
10. South Florida Bulls
Coming in near the bottom is a song that's actually not all that bad. It's officially called the Golden Brahman March, and it's the fight song of the USF Bulls. For many years, South Florida was one of Louisville's main opponents, but this is the first time we'll be playing them since we parted company when UofL joined the ACC. Anyway, there's nothing at all wrong with their fight song—I think it's just a bit too generic. I guess that's why I rank it at No. 10.
11. Central Florida Knights
Two of my favorite fight songs (though they're associated with schools that my alma mater seldom plays—if ever) are Memphis's Go Tigers Go and Auburn's War Eagle. This next song appears to be some two-bit marketer's knock-off of these two venerable fight songs, and because of this, it (like the team it represents) is very uninspiring. So coming in at No. 11 is the UCF fight song. Apparently it's called Charge On (probably a reference to the low credit scores of most of its alumni).
12. James Madison Dukes
My biggest disappointment this year is the James Madison fight song. JMU was supposed to be our sole FCS opponent this year, and past FCS fight songs have ranked really high. Examples include Eastern Kentucky, Indiana State, and Murray State, all of which have really great fight songs. But James Madison? Not so much. It doesn't sound like a fight song at all, but like either the theme song of a short-lived 1980's TV crime drama, or maybe a Broadway number belted out by Ethel Merman. Anyway, as it turns out, JMU is moving up to the FBS this season and joining the Sun Belt Conference, meaning UofL plays not FCS schools at all this year. I have nothing against them, but I have to rank their fight song at No. 12.
13. Florida State Seminoles
Sorry, but I just can't countenance this next one. For now, Florida State is an annual opponent of the Cards, and every year I am forced to rank them at the bottom. I don't hate the tune of their fight song—I'd probably rank it around the middle if music was my sole criterion. But the lyrics of the FSU fight song are just downright racist: "You've got to scalp 'em, Seminoles," and "FSU is on the warpath now." I know that if my own school used this kind of language, they would not be given a pass, and many other teams have been forced to change far less offensive symbols. So coming in at No. 13 is the Florida State fight song.

Honorable Mention: Louisville Cardinals (again)
The only reason that the University of Louisville's secondary fight song isn't ranked No. 1 is that it takes a back seat to the Cardinals' primary fight song. Voted the best song in the world by everybody and their mother is Hail, UofL! (Apparently it was the mother's cousin who put Fight, UofL! over the top.) So with an honorable mention, here's this UofL fan's second-favorite song: