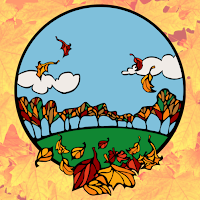 Today's theme was Psalm 121, which begins, I lift up my eyes to the hills—from where will my help come? Our two hymns were Leaning on the Everlasting Arms and Shall We Gather at the River. The choir sang for the first time this fall. Their anthem was This Is My Father's World, the story of which was the theme of today's devotion at the beginning of the service.

Here is a video the service (click on "read more"). Below that is a transcript of the sermon.

Our Pilgrimage
Well here’s something I’ll be you’ve never thought about before: What was punctuation like in the ancient world? Let’s face it, most people aren’t all that interested in punctuation. But we have to admit that it can make a big difference.

Or what about this caption beneath a photo: “Man eating chicken.” I think we can all picture that photo, can’t we? Just a regular guy at dinner. But what if we add a hyphen between the first two words? Then what we end up with is “man-eating chicken.” I can’t really picture that, and, to be honest, I’m not sure I want to.

It turns out, these little dots and dashes and squiggles that we call punctuation make a bigger difference than some of us want to admit—especially (apparently) in the dietary field. The presence of a tiny little mark on a piece of paper can turn a cannibal into a respectable home cook, or transform a man from being a KFC customer into being an entrée.

So how did the ancient Hebrews deal with this same phenomenon? How particular were they when they wrote down the words of the Bible when it came to commas and periods and the like?

The short answer is not very. That’s two words. The long answer is three words: Not at all. That’s because there was no such thing as punctuation in the original version of the Hebrew Bible. And not only that, but they didn’t even bother with spaces between words. So when we talk about our modern translations of the Bible, we have to admit that there was a bit of guesswork involved.

Now, for the most part, it’s not all that unclear. And when it is unclear, common sense tends to rule the roost. Should translators encounter the three words “man eating chicken,” they will almost always assume that it’s a man eating a chicken and not vice versa, so they wouldn’t bother with a hyphen.

But sometimes common sense isn’t enough. Sometimes the complete lack of punctuation creates a little confusion. And one of those instances occurs at the beginning of Psalm 121—the psalm we opened our worship service with this morning.

I lift up my eyes to the hills—from where will my help come?
—NRSV
However it’s translated, it’s a beautiful opening verse. And speaking of other versions, virtually all modern translations agree that that second part is a question—the psalmist is asking where their help will come from.

But older translations disagree. The King James and the earlier Geneva Bible both render this question as a statement. And they didn’t have to completely ignore a question mark to do that. Because remember? no punctuation—ancient Hebrew didn’t have question marks, or periods, or commas, or hyphens, or anything else. So neither of the two most well-known translations from around the year 1600 put one in.

I will lift up mine eyes unto the mountains, from whence my help shall come.
—Geneva Bible
It’s not that one version of this is wrong and the other one’s right. Either one is possible. Though modern translators seem to agree that it makes more sense as a question, we can’t say their ancestors were wrong when they said it was a statement.

Both ways of looking at it make sense in context. And the main context here is pilgrimage. Psalm 121 is in a section of the psalter called the Songs of Ascent. These were all psalms that were sung by pilgrims who were traveling to Jerusalem to visit the Temple.

Travel 3000 years ago had little in common with what we think of as travel. We have paved roads, automobiles—or planes—and for the most part, it’s safe. I can take off alone for just about any place in the United States without a thought about being waylaid along the road. Certainly, there are pockets that I might avoid for my safety. But comparatively speaking, those places are uncommon and easily avoided.

But back in the days when this psalm was written, in that part of the world (most parts of the world, really), travel was dangerous. People had to travel in groups for safety. The roads wouldn’t really qualify as roads by our standards. There were no rest stops or restaurants on the way. I can drive hundreds of miles a day. Back then, they were probably lucky to make it twenty. And they absolutely had to make it to the next settlement. It was simply too dangerous to be caught in a rural area after sundown. And travel didn’t involve sitting in a cushy seat. It was sometimes done riding an animal, but usually walking. Either way, injury was a real possibility… and sickness and injury were bad news to ancient travelers—much worse than they usually would be for us.

So put yourself in the shoes of an ancient pilgrim when you read this beautiful psalm. You love your God, and your greatest desire is to meet God in the holiest place on earth—to be with hundreds (maybe even thousands) of others who love God as much as you do, all gathered to sing God’s praises and to be in God’s presence. But to reach your goal, you’ve got to make real sacrifices and put your life on the line.

And on the way, you lift your eyes to the hills. Sometimes you ask, “Where is my help to come from?” And you hear the answer, “My help comes from the Lord, who made heaven and earth.” Or sometimes you know the answer before you ask: “I lift my eyes to the hills—the distant hills where Jerusalem lies, where the Temple was built—and I know that’s where the source of my help is.”

This isn’t the only place in the Bible where people were on the road, of course. The life of Christ as we know it was spent entirely on the road. It’s the same with the life of the Apostle Paul. And though Israel inhabited a land of promise, just about all of their formative history was spent as a journeying people.

And speaking of Israel, unique among all the peoples of the world that I’m familiar with, they shared their name with the individual who gave it to them. And today we heard about how the patriarch’s name was changed from Jacob to Israel. Jacob was on a journey, and it was a journey home to where he was from. He’d left on bad terms and he’d done a lot of bad things. He had to flee his old home because of the way he’d treated his father and brother. And he had to flee his new home because of the way he’d treated his uncle. So as he made his way back to his brother, he had to face his fears. And that’s where this very, very strange story from Genesis 32 comes in.

Without mentioning the specific ups and downs of Jacob’s life, we read of his struggles with right and wrong, victory and defeat in this brief passage. Even though he prevailed, he walked away disabled. His pilgrimage continued, but its direction was forever changed.

We—all of us—are also on a pilgrimage. Our lives are going somewhere and the mountains at the beginning of Psalm 121 represent the end of our journey. Sometimes we lift our eyes to the hills and say with confidence: My help comes from God! But there are other times when we can’t say anything so positive; the best we can come up with is a question mark: Where is my help to come from?

Sometimes we are with other pilgrims, celebrating our journey together in confidence. But at others we find ourselves alone in the dark, struggling with our beliefs, not knowing where our next steps will lead us. But whether we are proclaiming it boldly or questioning miserably, the answer is the same: My help comes from the Creator of the path that I’m on, the Creator of the skies above me and the world that surrounds me.

God will help me keep it together. And though I tire and fall asleep, God will stay awake; God will guard me. There’s nothing in the hot sunshine or the dark of night that can get to my soul, for the Creator of the sun and moon is the One who keeps my life. Journeying or resting, coming or going, this God is my God, both in this life and in the life to come.

And lest we think that our journey’s end is in the next world, Jesus taught us that our goal was not to experience God’s Realm in the next world, but to be part of the establishment of God’s Realm in this world. So let’s not waste our energy on the commas and semicolons of theological disagreement, but look around us and realize our neighbors are not only our companions along the way, but will be there at the end of our journey, joining us in praising the One who put us together on the path.
—©2022 Sam L. Greening Jr.