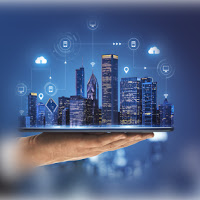 This morning's service began with a recollection of the hymn Holy, Holy, Holy, and that was our opening hymn in the worship service. The scripture reading came from Jeremiah 29, and the sermon compared Jeremiah 29:7 with the final words of Psalm 137. Our final hymn was a relatively modern one: All Who Love and Serve Your City.
Here is a video of the complete worship service (click on "read more") followed by a transcript of the sermon.
For Your Own Good
The Old Testament God is a God of vengeance. I hear that all the time, and I sometimes talk about this very thing. I’ve even asked you to think about whether you’re one of those people who says they believe in a New Testament God, because that’s the God of love.

And I agree that there does, indeed, seem to be a lot of violence—a lot of vengeance—in the Old Testament… certainly more than we find in the New Testament. But there’s also a lot of grace and beauty. Here are some of my favorite examples:
These are not statements of belief in a God of violence—they express the same faith that we New Testament Christians affirm.

But I’m not here to deny something that’s as plain as the nose on my face. Sometimes, even the beauty of the Bible is marred by ugliness. (And much of what we think of as ugliness is found in the Old Testament.) One of the best examples is Psalm 137. It’s nine verses long, and the first two thirds of it are a very sad but very beautiful lament:

By the rivers of Babylon, we sat down and wept when we remembered Zion; and on the willows there we hung up our harps.
For it was there that our captors asked us to sing songs, and our tormentors demanded mirth, saying, “Sing us one of the songs of Zion!”
But how could we sing the Lord’s song in a foreign land?
If I forget you, O Jerusalem, let my right hand wither!
Let my tongue cling to the roof of my mouth, if I do not remember you, if I do not set Jerusalem above my highest joy.

These are people whose homeland has been invaded and who have been carted off into exile. They’re being forced to live in the capital city of the country that destroyed their own country. Their sadness must have been indescribable. And yet these words will forever remain the most eloquent description of exile ever composed.

But suddenly into this beauty appears another human emotion—an emotion so ugly, that few of us can even finish reading the psalm that started out with such tragic beauty. For here in the final third of this psalm comes a wish for vengeance on those who had caused them pain:

If I could choose any words to eliminate from the Bible, any words that I wish weren’t there, it would be the last verse of the 137th Psalm. It’s not just the ugliness of them. It’s how they mar something that starts out so beautifully. But even so, how can I judge the psalmist so harshly? They’re praying that people who did something horrific to them might experience the same pain.

People say all kinds of things when they’re hurting—these particular words just happened to get written down. God gave us emotions and God wants us to pray from the heart—at least that’s what I’ve been preaching for thirty-some years. So I think God was able to hear that prayer and even somehow bless it.

Yes, I said bless the horrific sentiment that the psalmist expressed at the end of Psalm 137. And if you’ll bear with me, I’ll explain how. First of all, if we have ugly feelings, it’s sometimes best not to express them to the people around us. But hiding them from God is a bad idea. And so sometimes we’ll see prayers in the Bible that we don’t approve of. We read them several times in the psalms, but we never see that God does the psalmist’s bidding when they pray for vengeance. And here in Psalm 137, we read how a person in the deepest pain imaginable, who has lost their home, their country, even their children, expresses to God how they’re truly feeling. But we don’t read anywhere that God grants this prayer.

In fact, what we see is quite the opposite. When the Prophet Jeremiah talks to his people about the coming exile, he’s dealing with the very people who prayed that ugly prayer. But when he speaks God’s word to them, he tells them something that surprises us—and probably surprised Israel. It might even have made them angry, because it seemed to pour salt in their wounds. “You’re being taken against your will into a strange city. But live your lives to the fullest. All the things you would’ve done in Jerusalem, now do in Babylon. And not only that, but pray for it; work to make it a better place. Because when it thrives, you, too, will thrive.”

Israel prayed for vengeance. God’s answer was not only No, but God told Israel to work for the good of those who had hurt them. And they must have obeyed, because the Babylonian Exile was one of the most important periods in Jewish history (and therefore Christian history). It was in Babylon that Jewish identity was more deeply forged, and it was in Babylon that the first five books of the Bible were compiled and written down.

So if we look at Jeremiah 29 in relation to Psalm 137, I think the first thing we learn is honesty. We’re humans. Sometimes we think ugly thoughts. And while we might not want to let loose when talking to other people, we should be honest with God. God can handle our ugliness, and even transform it. Because that’s what happened here. God took prayers for vengeance and turned them around: Seek the welfare of the city where I have sent you into exile, and pray to the Lord on its behalf, for in its welfare you will find your welfare. God’s will is not that we wallow in our bitterness, but that we emerge from it as transformed people.

Which brings me to the second thing we learn: When God answers our prayers, it’s often in a way we don’t want. In this case, God’s answer was probably the opposite of what the psalmist wanted. When we pray, we cannot dictate the terms of the answer. We may get what we hoped for, or we may be directed to do the last thing we wanted to do. When Jesus told us to pray for our enemies, he wasn’t telling us something new. God had already told Israel to do as much during the Babylonian Exile. It may have gone against the grain, but it was the best answer possible: It enriched their spirits as well as making life in a foreign land livable.

So the third and final thing for us Christians is that when we pray, we should also be meditating on the teachings of Christ. When we’re up against personal difficulty, we know we can go to One who himself knew pain and hunger and thirst and betrayal. He met life’s challenges, not by wallowing in his fear, but by moving forward in faith and love. He knew that beyond hunger was the bread of life. Beyond rejection, there was forgiveness. Beyond the cross was the empty tomb.

And just as importantly, we are called upon to apply Jesus’ teachings to our common life. Not just for the good of others, but for our own good, we seek the welfare of our neighbors—regardless of who they are or what their beliefs are. That’s what Jeremiah was talking about when he said that in their welfare we would find our own. So we have the words of an Old Testament prophet to affirm our Lord Jesus Christ’s teachings to pray for our enemies.
And if we need a more contemporary witness, hear these words from Martin Luther King, spoken in his Christmas message of 1967: It really boils down to this: that all life is interrelated. We are all caught in an inescapable network of mutuality, tied into a single garment of destiny. Whatever affects one directly, affects all indirectly. Down through the ages, the same message has been spoken by different prophets in different ways. But it all boils down to this one message: Love your neighbor, even if you don’t agree with them… for your own good as well as theirs.
—©2022 Sam L. Greening Jr.