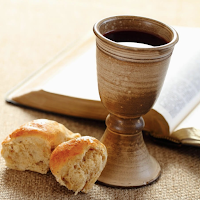 We celebrated World Communion Sunday today at Pilgrim Christian Church. Our call to worship, based on the writings of Alexander Campbell, began, "You, my beloved, once an alien, are now a citizen of heaven..." Our opening hymn was In Christ There Is No East or West, and our scripture lesson was 2 Timothy 2:3-10. During the sharing of the bread and cup, we sang One Bread, One Body. Here is a video of the complete service (click on "read more"), followed by a transcript of the sermon.
Generations
I am reminded of your sincere faith, a faith that lived first in your grandmother Lois and your mother Eunice and now, I am sure, lives in you.
—2 Timothy 1:5
I told you a few weeks ago that I’d ordered a new watch. And then last week I told you that it had arrived. This week I’ll talk about it one more time, and this time I’ll talk about how it misleads people. I wear it on my right wrist, so most people assume I’m left-handed, which is not the case. You see, my father wore his watch on his right wrist, and he wasn’t left-handed either. And he wore his watch on his right wrist because that’s where my grandfather wore his watch. And he was left-handed. So maybe a hundred years ago, something started that continues to this day, even though the reason for it no longer applies.

It doesn’t really matter how many years ago, though, because such things aren’t measured in years, but in generations. I’m sure just about everybody here today can think of something similar in your own family—a holiday custom, a unique practice, a childish mispronunciation of a word—that has been passed down from one generation to the next.

The Bible has lots of such things, but most of them are stories. One of the best is the story of Ruth and Naomi. The Book of Ruth existed as a story told by word of mouth long before it was ever written down. And one of my favorite things about this is through whom the story must’ve been passed orally. That’s because Ruth’s son was Obed, and Obed was the father of Jesse—the same Jesse visited by the Prophet Samuel when God told him that one of Jesse’s sons was to be anointed king of Israel. That little boy, of course, was David. Many of us knew some of our great-grandparents. Is it possible that David knew his great-grandmother Ruth? If not, then it’s certainly possible (indeed, probable!) that some of Ruth’s traditions found their way into the household of her grandson Jesse—the same household David grew up in.

In today’s scripture reading, we heard another story about generations, from grandmother to grandson: Lois, Eunice, and Timothy. We didn’t hear a whole lot of the story today. But we heard that it was a faith shared through three generations. Think about that: We often refer to the New Testament faith as “first-generation Christianity,” but here we are with a grandmother passing down her belief in Christ to her daughter and her grandson, and now her grandson Timothy is taking up the mantle of leadership in this so-called first-generation church (which to him is already three generations old).

Christianity to Lois must’ve been very different than it is for us. She was part of a tiny minority. How many people in her part of the world would have known who Jesus even was, let alone what it meant to be one of his disciples? The lines between the Jewish faith and the new faith were still very blurry. There were no church buildings. There was no New Testament to read from. Christians had to meet in secret, usually after dark (remember, back then, Sunday was a work-day for everybody). How did she introduce Eunice and Timothy to her new faith? Perhaps they were all baptized together. Perhaps those who came after her became Christians after listening to the stories she shared. But however they joined the church, it was for them an intergenerational experience.

I like to think that, even with all the differences, it’s that part that we have in common with first-century Christianity. From one generation to the next, we share our faith. And so I think it’s important sometimes to pause and take stock of what the faith is that we’re sharing. And the point of me saying this is not to dictate the faith that’s shared. Faith for each of us is unique, and I think faith changes throughout our lives, no matter who we are. And part of that is precisely because it is shared down the generations—unique individuals speaking and acting in ways that help others understand what it is they believe.

But the foundation of each person’s Christian faith is the same. At its center is the life, death, and resurrection of Jesus Christ. When we love and live and give, we are sharing our faith in Christ. This happens in the worship service, of course. It happens before worship as we greet each other and after worship in coffee hour. It happens in the ways we do ministry through boards and committees and special offerings. It happens in music and fellowship events. But these formal ways of acting out and sharing our faith are just the tip of the iceberg. For it’s in the way we act at home and the ways we act out in the world that faith is most often shared.

But somehow the sharing of our faith is summed up in one very peculiar way in the Christian faith. When it first happened it must have seemed incredibly obscure. And the sense of mystery it conveyed then is no less striking two thousand years later. Matthew, Mark, and Luke all told us about it. But they weren’t the first. Before they wrote it down in their gospels, the Apostle Paul shared what he’d been told in his First Letter to the Corinthians [11:23-26].

For, he said, I received from the Lord what I also handed on to you, that the Lord Jesus on the night when he was betrayed took a loaf of bread, and when he had given thanks, he broke it and said, “This is my body given for you. Do this in remembrance of me.” In the same way after supper, he also took the cup, saying, “This cup is the new covenant in my blood. Do this, as often as you drink it, in remembrance of me.” For as often as you eat this bread and drink the cup, you proclaim the Lord’s death until he comes.

So today, let’s be especially mindful that the faith we practice and the beliefs we hold are not ours to keep, but are to be shared with the generations yet to come. The notion that ours is a hand-me-down faith is what our religion is all about. And at the core of that faith is the sharing of the bread and the cup as we remember our Lord’s self-giving. People of every nation and tongue, people of every time and place join us this day in eating, drinking, remembering, and proclaiming a Savior who offered all he had that we might live, and who is with us yet in the simplest of elements and in the most unassuming of people.
—©2022 Sam L. Greening Jr.