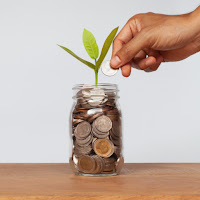 We opened this morning's worship service with words taken from the 91st and 31st Psalm, then sang Guide Me, O Thou Great Jehovah. The scripture lesson was taken from 1 Timothy six, which includes a warning about the love of money. But the sermon text was Jeremiah 32:15, a verse from the passage that tells how Jeremiah bought a field in Anathoth—the inspiration for our second hymn choice, Faith While Trees Are Still in Blossom. Our last hymn was When We Walk with the Lord (Trust and Obey). Below is a video of the complete service (click on "read more") followed by a transcript of the sermon.

So the first verse we heard this morning told us that there is great gain in godliness combined with contentment. This is one of those verses we need to hear a lot more of. My first instinct was to make this my preaching text. But I preached this sermon not all that long ago, so it wasn’t yet ripe for repeating. If you want to hear more about it, I recommend reading a book from the 1600’s called The Art of Divine Contentment. It’s by a Puritan minister named Thomas Watson.

After a few verses on contentment, we heard something very familiar. But it may also have been a little bit unfamiliar as well. The opposite of contentment, of course, is greediness. And speaking of greediness, how many of us have heard that money is the root of all evil? Well, I’m not sure if it’s intentional or not, but this is a pretty blatant misquotation of scripture. Though all those words are contained in this Bible passage, a few words are left out that change that meaning pretty significantly.

1 Timothy 6:10 in the old Authorized Version says, “For the love of money is the root of all evil.” So you have to admit that leaving out the words “the love of” makes a pretty big difference in our understanding of this verse. Money is an inanimate object. By itself it is neither good nor evil. It is our attitude toward it—our reaction to it—that should be judged. And here, the writer of this epistle says that our reaction to money can be evil. Loving it too much brings us down. The closer that money is to the top of our list of our priorities, the less healthy we’re going to be spiritually.

But even that translation is somewhat misleading. We know that loving money can lead to evil thoughts and deeds. Placing too much value on our bottom line can end up devaluing our fellow human beings. But we also know that there really are evils which are not based on the bottom line, which have little or nothing to do with finance. So it must be a figure of speech that we find here in the Bible which says that “the love of money is the root of all evil.”

And indeed it is. The Authorized Version translated this verse literally. Which is fine. But we need to be aware that this literal translation is of a phrase that should not be taken literally. That same word for “all” that we read in “root of all evil” is also used in Matthew 3:5. There, the Greek seems to say that the entirety of Judea was going to John to be baptized… something we know was a figure of speech. And there are other places where this word is used, but we know not to take it literally.

We don’t even take ourselves literally when we speak this way. The other day I had to run to Marc’s to pick up something for my move. And I was behind a nice young family who were about to throw some kind of a party, and they were buying all kinds of pop. Notice I said “all kinds” of pop. Now, I know they weren’t buying all kinds. There were probably hundreds of kinds of pop they weren’t buying. They weren’t even buying all the kinds of pop that Marc’s stocked. But that’s just how we say it in English, isn’t it? “All kinds” almost never literally means all kinds. It simply means “a lot” of.

And so if you read a more modern translation of 1 Timothy 6:10, you’ll find that virtually all of them translate this phrase a bit differently. Instead of saying “all evil,” they say “all kinds of evil.” Remember, that phrase “all kinds” seems to double down on saying that money is the root of all evil. But, in fact, it’s simply an idiom—in the same way of the original Greek obviously was—that cannot be taken literally. It’s telling us that money is the root of a whole lot of evils. But it’s not telling us that there’s no kind of evil that money’s not the root of.

So money is neutral—it’s what we do with it that’s good or bad. And if the love of money is often found at the root of evil deeds or injustice, it must also be possible that it can sometimes do something good. Are there any examples from the Bible where this actually happens? Well, in the Book of Jeremiah, we find the prophet making three purchases that do God’s work.

And then in chapter 32 we read about Jeremiah’s third purchase. And this is the biggest one. There’s no need to warn anybody of judgment, because it’s already come. The Babylonians have already invaded and exile is looming. But in the midst of this destruction and desolation, the prophet buys a piece a property. It’s a field in the town of Anathoth.

It appears that throughout his ministry, Jeremiah had the strange gift of spending his resources to share God’s message. And in every case, most of us might call his spending a waste of money. A ruined piece of clothing, a cracked pot, a field that he could never profit from. But he was a prophet. And the call of a prophet wasn’t just to predict the future, but more importantly to read the present. Jeremiah tried his best to get his community, his nation, to respond to what was going on around them with renewed faithfulness to their God, their only hope for salvation. And even when he met with failure, he still invested in what appeared to be a non-existent future. For thus said the Lord, “Houses and fields and vineyards shall again be bought in this land” [Jer. 32:15].

Despite everything bad that was happening, Jeremiah invested in a future that at that time was impossible to see. His silver would’ve been much better spent on food or on accommodation in Babylon. But his trust in God far outweighed his love of money. And so he spent his seventeen silver shekels on something that only he and God could glimpse.

But what does Jeremiah’s field in Anathoth have to do with us thousands of years later and half-a-world away? For that matter, what does the Babylonian invasion and Israel’s exile have to do with us. But anyone who has dealt with defeat and alienation can find encouragement in this story. The Babylonian exile should’ve been a horrible experience. But despite their downfall, the Jewish people flourished during these seventy years. The first five books of the Bible took shape, their stories were studied, and their identity was celebrated. And all of this happened even as they prayed for and coëxisted with their Babylonian neighbors. But they never forgot where they came from, and Jeremiah in particular knew his true homeland lay in the promise of God.

In a world in which our identity and happiness are bound up with what we earn and what we own, Jeremiah reminds us to invest in a different kind of future. If the love of money is the root of all kinds of evil, then let us love God more. Despite any defeat the world might hand us, we’ll know where our future lies and we’ll know we have a home in the Kindom of God.
—©2022 Sam L. Greening Jr.