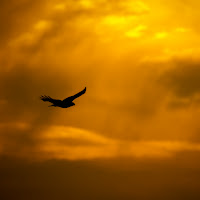 Today was Stewardship Sunday and the message was based on Hebrews 10:24. It concentrated on the theme of the church. The congregation's part in the opening prayer came from A New Zealand Prayer Book: O God, make your church like a rainbow shining and proclaiming to all the world that the storm is at an end, there is peace for those who seek it, and love for the forgiving.
Here's a video of the complete service (click on "read more") and beneath that is a transcript of the sermon.
People of the Promise
Hello, my fellow dinosaurs.

That’s what we are, you know—we children of a different era who still get up and get dressed for church on Sunday morning, we who sing hymns together and ask each other to pray for one another, we who sit (relatively) still and listen to an old guy at the front of the church hold forth on whatever topic he’s chosen, we who enjoy gathering in a big room downstairs and chat over church coffee and whatever snacks are available on any given Lord’s Day… and we don’t just talk to people our own age or from our own background, we talk to everybody.

What I’m talking about used to be pretty common in our culture. Everybody went to church, everybody believed—or at least they said they did. But all that started changing fifty or sixty years ago. It happened slowly at first, the nation’s churches started to record membership losses. But people still went to church, and nobody said they didn’t believe in what the church believed. Surely these troubling statistics were just a glitch, a tiny leak that would soon be repaired.

But of course, they weren’t. What started out as a few drops became a trickle, and the trickle became a stream, and that stream has now become a flood. Huge denominations are now half the size they used to be. Churches are closing their doors, and huge and beautiful downtown churches that people once flocked to now stand empty… or have been converted to theaters, restaurants, or even condos. At first it was churches losing members—people still said they believed. But now even the belief is being left behind. People who claim to be Christians are still a majority in this country. But the number of Christians goes down by at least 1% every year. What was a 75% majority in 2011 was a 63% majority in 2021. The fastest-rising religious statistic in the U.S. is now the number of people who claim no religion at all.

There are exceptions to the rule, of course. But many of these megachurches that look more like warehouses than places of worship are more style than substance—all rock bands and screens flashing the message of the day. That’s my take anyway—I’m sure they’d describe themselves differently.

So why do we still do it? A lot of people would say tradition, or habit. Others might say it’s just comfortable. And I think there’s some truth to all this. But that’s all there was to it, then there wouldn’t be any substance to the church. You’d all come and sit in your pews and chat in the social hall and that would be the end of it. But that is not, in fact, the end of it.

I’ve been hearing more and more pastors complain about their jobs recently. They’re not horrible complaints—most deal with their dwindling congregations. And the one thing I’ve heard more than anything else is this: “My church is mostly 70- and 80-year-olds, and they’re just not interested in doing anything but sitting in the pews.”

All I can think when I hear this is, “Hmm. I’ve got lots of 70- and 80-year-olds, too. And sometimes I wish they’d do a little more pew-sitting: I have trouble keeping up with them.”

Which brings me to the point of this message—the message that’s found in the Epistle to the Hebrews 10:24—Let us consider how to provoke one another to love and good deeds—because that’s what I think our M.O. is. We believe that no matter who you are or where you are on life’s journey, you’re welcome here. We also believe that no matter where you are on life’s journey your gifts are also welcome. There’s always somebody in this congregation who feels provoked… I don’t mean they’ve been goaded or made angry by somebody else in the church. I mean one of you all has come up with a new idea to minister to your brothers and sisters or to minister to people out in the community or the world. A month doesn’t go by that we don’t do something special. Sometimes we reach within and sometimes we reach out. But we continually provoke one another to love and good deeds.

As we think about how the church works in our lives, let’s remember that one of the ancient symbols for the church is that of the ark, as in Noah’s Ark. They who were on the ark were delivered into a new world. And when the storm had ended and they were ready to begin again, they saw in the sky a rainbow, which was a sign of God’s eternal promise of faithful love. We still see rainbows and God’s faithful love has never failed: We are people of that promise—the same promise given to Noah.

So let us, in the words of the writer of the Letter to the Hebrews, hold fast to the confession of our hope without wavering, for the One who has promised is faithful. For it’s not just the rainbow in the clouds that proves God’s faithfulness to us. Each of us is a sign of hope to everybody else. And we each confess that hope in our own unique way. Some with words, some with actions, some with prayer—or any combination of those three.

But—in my opinion at least—the most important way you can share your hope is to simply show up. To come to church and be surrounded by your brothers and sisters brings something to our lives that nothing else can. And by that I mean our life as a community, but also the life of each individual. There is always a time for solitude, but when we come to church, we want to know we are not alone. Our gathering need not be raucous. And it’s true that where two or three of us are gathered in Christ’s Name, he is here in our midst. But it’s just so encouraging when it’s more than two or three, when we feel like we’re not dinosaurs, when we know that our community is strong enough to fill our little sanctuary.

And our community is strong. Sometimes we contribute to that strength. We add our gifts to the gifts of others, and the result is phenomenal. But there are other times when we need to be recipients of the strengths of the church. But regardless, we know that as members of one body, when we feed the hungry or help the refugee or help someone pay their utilities, it’s all of us working together. When we throw a dinner or have a youth or children’s event, it doesn’t happen in a vacuum—many people have to make it happen. And God, the Source of it all, begins and ends the work through our worship. Our presence is therefore our most important gift to our brothers and sisters.

And think about what church is, how church is different. Many of you out there belong to service clubs which do a lot of good. And those organizations have much in common with the church. But they are not the church. They do not share the stories of our faith; they do not welcome children into the family; they do not celebrate God’s presence in the meals they share.

Many people these days are inspired by the business world. Some even say that the church should run itself like a business. But that’s impossible. The church isn’t about making profit, and we can’t limit our service to those who can pay us for it.

Many people seem to want to get the church mixed up with government these days. Some who do that even seem to be growing big congregations. But confusing the values that we share with partisan politics is not what the church is about. We are not called upon to run the country. We are called to reach out to the world in love.

God’s promise to those who emerged from the ark—the promise seen in the sign of the rainbow—was faithful love. We are people of that promise, and more than anything else, our responsibility to those who come after us is to be faithful—not to a building, not to an organization, but to the God who loves us and to each other, fellow members of the body of Christ.
—©2022 Sam L. Greening Jr.