Remember then from what you have fallen; repent, and do the works you did at first.

We used to put the Pilgrims on a pedestal in this country. They represented all that was good about our beginnings. And of all the things about them that we idealized, it was their search for religious freedom that we found most inspiring.

The story of the first Thanksgiving was a subplot to the overall narrative. But it fit in quite nicely: After surviving a brutal winter, planting crops with the help of the people who were there first, and bringing in their first harvest, they invited their Native American neighbors to a feast to show their gratitude to God.

Never mind that we forget the Pilgrim calendar, that they didn’t celebrate holidays as we think of them—no Christmas, no saints days, nothing that we think of as a holiday at all really. Their calendar consisted six work days every week, and the only icing needed on that divinely baked cake was the Lord’s Day—the day of rest when they worshiped together as a community.

And as a  they occasionally had other observances imposed by their leaders. When they lost sight of who they were, they called for days of communal fasting and penitence. When things were going well, the community was called upon to give thanks to God for the blessings they were enjoying. This did not necessarily include a feast. But sometimes it did. 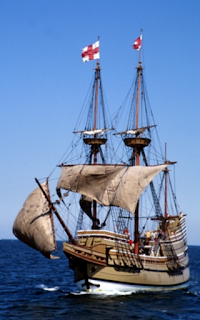 And so in September 1621 when the leadership of the new colony of Plymouth called upon the community to give thanks for a harvest and, indeed, for the fact that they were even alive, they decided to acknowledge the rôle their neighbors played in their survival by inviting them to a meal.

The relationship of the Pilgrims with their neighbors is often misunderstood. So violently have we knocked the Pilgrims off the pedestal we used to have them on, that we can no longer even see what their relationship with Native Americans originally looked like.

So let’s talk a bit about what went on between the Englishmen and –women we claim as our ancestors, and the people called the Wampanoag who already lived on the land surrounding Plymouth Rock. We must first remember that the Pilgrims were far from the first Europeans in the Americas. The Spanish had begun exploiting the New World over a century before, and one of the side effects of that exploitation was the arrival of Old World diseases. Indigenous Americans had no resistance to many of these diseases, and so the devastation was horrendous. We cannot overlook the epidemics that followed, but we must also admit that these two sides of the world would someday have to meet. Perhaps the spread of small pox and measles and other diseases was inevitable.

But however we may choose to look at it, in the years just prior to the Pilgrims’ arrival, those diseases had finally reached what we now call New England, and the impact upon the population there had been devastating. We all know that the Pilgrims needed the Native peoples to teach them how to live on this strange land. But what we often overlook is the fact that the Native peoples also needed the Pilgrims. People thrive when there is interaction with outsiders, when there’s trade, when there’s an exchange of knowledge and ideas. When people are isolated, when their numbers fall below a certain level, when there’s no opportunity for trade or any other kind of exchange, that’s when peoples and cultures meet their downfall. 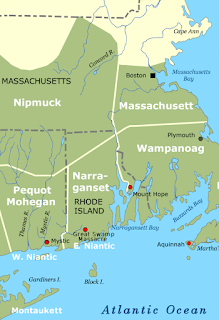 This need for mutual exchange, however, was not something the Pilgrims exploited in a bad way. They did not know that the people they met here were in desperate straits. But they genuinely had no desire to force their own culture— not even their own religion—upon the Wampanoag. War did not break out in Plymouth for over fifty years; and indeed the first generation of both European and Native Americans after the landing at Plymouth Rock viewed each other in a positive light. They needed each other to survive, and because of each other, both groups actually began to thrive.

The distance between our ideal of what the Pilgrims should have been and what the Pilgrims actually were really isn’t as great as we’re told these days that it was. Were the Pilgrims the open-minded Christians that their children’s children’s children in the United Church of Christ became? By no means. I suspect most of us would have found their Christianity to be a rather oppressive religion indeed. But by the same token, they did not arrive on North American shores with the intention of exploiting the people they found here, or stripping the land of its resources and shipping them back to Europe.

And so, I think, I’ve just named two of the things about American Thanksgiving which makes our national holiday different from harvest thanksgivings in other places.
In this morning’s New Testament reading, God has good words to speak to the Ephesus. They had gotten off to an excellent start. But it’s made known that God also has something against the Ephesians—they seem to have fallen out of love with their Savior… or at least their love has grown weaker over time. “Remember from what you’ve fallen,” they’re told, “and turn back.”

We’re different people with different circumstances, but I wonder if God might not say the same thing to Americans. Remember from what you’ve fallen, and turn back:
What the Pilgrims and the Wampanoag accomplished wouldn’t have been possible in another time or another place. Perhaps had the Pilgrims arrived in Wampanoag territory before the epidemic struck, when the Wampanoag were more powerful and had no need of outsiders, the English would’ve been sent packing, or even killed. And I think we know, had the rôles been reversed and the Wampanoag been the ones to land at the old Plymouth—the one in England—seeking a new home, that they would have been seen as foreign invaders. 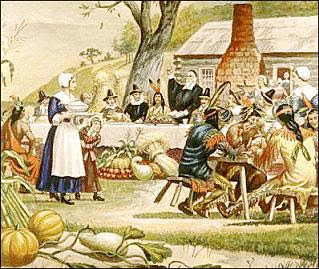 But these few colonists landed among a native population that had been nearly wiped out by a disease they’d never encountered before. And as it turned out, the Wampanoag needed the Pilgrims as much as the Pilgrims needed the Wampanoag. The Native Americans could never have known that what these strangers were founding wasn’t just a small village on the edge of a continent, but the most powerful nation on earth. And I suppose it’s natural that such power would make us think of ourselves as advanced, and as lifted up.

But perhaps we would do well instead to think of Plymouth in the autumn of 1621 as our high point, and to remember what it is we’ve fallen from. Wealth and power are not the be-all-and-end-all of nationhood, especially if the fear of immigrants eclipses the fear of God in our common life. And the celebration of a holiday, the very origin of which was the breaking down of barriers, in an atmosphere of wall-building must make our prayers of thanksgiving sound pitifully hollow in the ears of the One to whom we pray.

Maybe others can forget the Pilgrims this Thursday. Maybe they can be satisfied to say, “That’s not who we are,” or “That’s not what we’re about anymore.” But not us. We are the Pilgrims. When we want to explain to somebody which church it is that we belong to, what can we tell them but, “The one the Pilgrims brought with them on the Mayflower”? And if anybody asks us what it is that we believe in our church, few of us recite to them a creed or even particular theological doctrines that we espouse. Yes, we have our own beliefs, and we talk about them extensively in worship. But what we want others to know about us is that, whatever it is that we believe, we have come to that faith without coercion. And, like those who landed at Plymouth Rock, the fact that others have different beliefs does not mean that we cannot feast together with them.

Let’s remember this week those who celebrated the first Thanksgiving. Let’s remember what that observance was really about. Let’s remember how far we’ve fallen. And then let’s get up. We can’t go back to Plymouth in 1621. But we can go raise our voice above the current discourse, and we can raise our eyes out of the current rut in which we and our nation find ourselves.
—©2016 Sam L. Greening, Jr.