Surely the Lord is in this place—and I did not know it!
—Gen. 28:16
Prologue: Pet Elephants 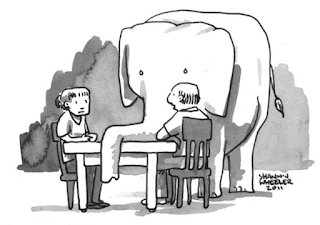 Elephants aren’t directly mentioned in the Bible. But the idea of elephants as house pets is found throughout the first book of the Bible. I say this, because when we read the stories of the main characters in Genesis, we can’t help but notice that there’s an elephant in the room. And the elephant looks like this: The people—especially the men—who are our ancestors in the faith were not good people. At least not by our standards. Noah and Abraham, even Sarah and Rebekah—all of them did things that we would be deeply ashamed of.

I’ve saved this observation until this morning because nowhere is it more obvious than in the life of the subject of today’s sermon: Jacob.

We got quite a taste of Jacob’s unsavory side last week. Or at least Esau did, when he ate Jacob’s stew but had to trade his birthright to get it. And Isaac did, when Jacob pretended to be Esau and served his dad his favorite dish in order to trick him out of a blessing.

And the stories don’t stop there. If we continue reading about Jacob, we’ll read several more stories of Jacob’s willingness to trick people in order to get what he wants. We learned last week what Jacob’s name literally means. And when we read his exploits, we want to join his brother in saying, Not for nothing was he named Jacob, the Heel! [Gen. 27:36, The Message]

And so what are we to do with these stories? If our heroes in the faith were so unscrupulous, what does this tell us about God? The Hebrew Bible is filled with references to righteousness, but its characters do very unrighteous things. But the Bible doesn’t really seem to pass judgment on them.

There are two keys to understanding this, at least to my way of thinking. The first is found later in the Bible in Israel’s most beloved king. David was thought of as righteous, but many of the things he did to other people seem horribly unrighteous. Yet when David confessed his wrongdoing in Psalm 51—the psalm Christians pray on Ash Wednesday—he confessed not his sins against the people he’d hurt, but his sins against God: Against you, you alone, have I sinned, and done what is evil in your sight [Ps. 51:4]. Righteousness, therefore, is found in a person’s faithfulness to God, not in their morality. We want to measure righteousness by the second table of the Ten Commandments (the ones that teach us how to treat each other), but the oldest parts of the Bible seem to measure righteousness by the first table (the ones that teach us about our relationship with God).

The second key is found not in David, but in the New Testament writings of Paul. The law of God is important to Paul, but he says we can’t obey it on our own. Therefore, none of us can claim righteousness on our own. But we can be righteous, not by faithfulness to God, but by faith in Christ.

And so in both instances, we need to let go of our human view of righteousness if these ancient stories are to make any sense to us. We all fall short, even those we look up to the most. Instead, we are to measure righteousness either by our love for God or by our faith in Christ. 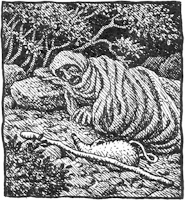 Which brings us to Jacob, whose actions teach us how imperfect we humans—even the best of us—are. But Jacob’s life was somehow lived as a promise by God and as a commitment to God. In Genesis 27, Esau swears that he’s going to kill Jacob for what he did to him, and here in chapter 28, we find Jacob leaving Canaan where he lived with his parents and twin brother and making his way to the land of his mother’s family. As far as we can tell, he’s totally alone—something that must’ve been quite frightening for him. And one night as he makes his way east, he goes to sleep under the stars and uses a stone for a pillow. And he dreamed there that he saw angels leaving heaven and coming to earth and leaving earth and going back to heaven. When he awoke, this heel of a man spoke some of the most beautiful words in the scriptures:

Surely the Lord is in this place—and I did not know it! How awesome is this place! This is none other than the house of God, and this is the gate of heaven [Gen. 28:16-17].

And so he named that place Bethel, which is Hebrew for House of God.

The place where Jacob lay, though he didn’t realize it, was the dwelling-place of God—or at least a dwelling place of God. In ancient religion, that was important. Some locations were thought to be holier than others. And holy places became centers where people would make pilgrimages and sacrifices. Later in the history of Israël, Mount Zion in Jerusalem became the only place where God’s presence on earth was acknowledged, and the only place where sacrifices could be made. This was as much for political reasons as theological reasons, when David was consolidating power, and when the twelve tribes were newly united.

But Jacob discovered Bethel long before that. And when he was fleeing certain death and heading to what he didn’t know, he found out that God dwelt where he least expected it. And there in God’s place, God confirmed the promise made to Jacob, despite Jacob’s deviousness.

I think many of us don’t allow ourselves to know God’s presence. We don’t see it in the people we encounter, we don’t feel it in the places we dwell, we can’t imagine it in the situations that are part of our everyday lives. Maybe the presence of God just seems too supernatural to us. Or maybe we don’t feel like we’re good enough—we’re all too well aware of our wrongdoing.

Our church’s message is that no matter who you are now, what you did in your past, or what road you’re on, you can know God’s presence. And no matter whom we encounter, where we find ourselves, or what’s going on in our lives, we can—I might even go so far as to say that we do—dwell in Bethel, in the very house of God, whether we know it or not.

So what are our dreams of God? 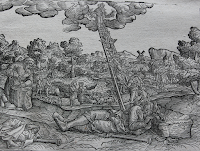 When Jacob dreamed of God, he dreamed of a ladder reaching from heaven to earth with angels ascending and descending on it. It’s a very hierarchical dream, when you think of it. And the UCC is uncomfortable with hierarchy. One of the reasons our ancestors came over here on the Mayflower was because they wanted to get away from the hierarchy of the Church of England. These days we would go even further. We’d go so far as to say that because of the Incarnation, we need not think of heaven as a place we need to climb a ladder to get to. Christ brought the Realm of Heaven among us, and we need not climb to reach what’s already at hand.

That’s why we included the hymn We Are Climbing Jacob’s Ladder in The New Century Hymnal, but followed it with another dream, We Are Dancing Sarah’s Circle—a more egalitarian look at our belief in how God’s presence works and how our relationship with each other ought to look.

We know Jacob’s dream. What’s ours? When we dream of where God is and how we reach God, what do those dreams look like? Maybe even more importantly, when we dream of God, where are our brothers and sisters?

I think these are important questions. Because sharing those dreams is basically the calling of every individual follower of Jesus and every congregation which claims Jesus Christ as its head. Our mission can be boiled down to realizing God’s presence in the places we go and live, in the situations we find ourselves in, and in the people in our lives—and that includes ourselves… and once we’ve realized that God is everywhere, to share our dream of what that makes the world look like.

I think our belief in a Realm of God that exists in our midst and our dreams of welcome for all God’s people can make the world a better place. Though there are lots of churches that share this dream, I know our voice is usually drowned out by churches that seem to dream of hierarchy and exclusion. But we are called not to loudness but to faithfulness. So let us be faithful in sharing our dreams of God.
—©2017 Sam L. Greening, Jr.