'It Was the Best of Times' 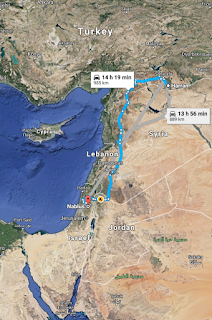 It was the best of times, because I was young and I was rich. I’d moved north to live among my mother’s people, and there near the city of Haran, I went from having nothing to having everything. I admit that some of it was at my uncle’s expense. But Uncle Laban could give as good as he could get. If I’d tricked him out of a few herds, he started it by saddling me with both his daughters.

Don’t get me wrong. I loved one of them. But in order to marry her I had to work for my uncle for many years. And since she was the younger daughter, I had to marry her older sister before I could marry her. In the end, I had two wives, and thousands of sheep.

But it was also the worst of times.
Because I could never forget why I was there in the first place. You see, Haran was hundreds of miles from my home in Canaan where I’d been brought up, and I didn’t leave Canaan because I wanted to. My parents decided I needed to marry somebody from the ancestral homeland. But that was a convenient excuse. The fact was that I had tricked, Esau, my twin brother out of his birthright, and I’d tricked my own father, Isaac, into giving me his blessing—a blessing that was intended for my brother.

In the middle of the night when I think about my past life, I blame my mother. After all, she was my accomplice in all this. But the truth is that I did what I did to get what I wanted. And I knew that I was hurting my brother when I did it. And once you’ve tricked your twin brother and your father to get ahead in life, it’s easy to keep on doing it to everybody else.

They say when I was born, I was holding onto Esau’s heel. And so that’s what they named me—Jacob means Heel. And the last words I heard my brother say were, “Not for nothing was he named Jacob, the Heel. Twice now he’s tricked me: first he took my birthright and now he’s taken my blessing.” Well, nearly the last words. He also swore he was going to kill me for what I’d taken from him. I knew I deserved it, too, so I didn’t even bother to stay and fight for what was mine. I left home, and traveled through the desert alone to get to Haran.

On the way I dreamed of my grandfather’s God—he only believed in the One—and I knew that despite all my wrongdoing, God was still with me. I think you all call that grace, but I didn’t have a word for it. It was simply what I believed.

And after many years, I got what I could out of my mother’s relatives, and finally they’d had enough of me, too. There was talk of vengeance. So it was time to high-tail it out of there. Where could I go? The world is big, but I knew no one to the east or west or north. I had no choice but to head south, where I came from, and where my brother was waiting to kill me.

My choice was between certain death and the promise of death. And so I chose the promise over the reality. I left without a word, and it was only the word of my grandfather’s God that prevented Laban from killing me and taking back his daughters and his flocks. 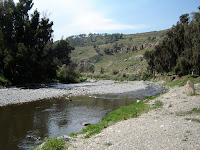 And there I was at water’s edge. The Jabbok is a big river by our standards, but my wives and children, my servants and my flocks all found it easy enough to ford it. For me, though, it was not so easy. To me it seemed broader than the Jordan, as wide as the Red Sea. You see, everybody else can survive the crossing. I could not. It’s not that I needed God to part the waters for me—not that that could ever even happen. That would simply have hastened my death. For my peril lay not in the jaws of the river, but at the hand of Esau on the other side.

This wasn’t the first night I’d spent alone on this route, after all. But all the other ones had been spent headed toward safety. That night I was heading straight into danger. But as frightening as the prospect of Esau was, I had to admit that I was a little apprehensive of the wilderness as well. Angry twin brothers weren’t the only dangers lone travelers had to face. There were robbers and wild animals and goodness knows what else. I wasn’t ready to die at Esau’s hands. And I certainly wasn’t ready to be eaten by a mountain lion or killed by a highwayman.

So I built a fire, and kept it going through the night. It cooked my food. It kept me warm. And it kept me awake… at least for quite a while. But after what seemed like an eternity alone at the ford of the Jabbok, sometime in the wee hours, I finally succumbed to sleep. 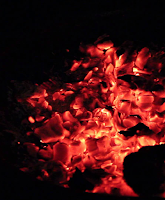 I don’t know how long I slept, but it must’ve been longer than a few minutes. All I know is that I woke up with a start, my heart racing, and I was scared. Really scared. My fire had died down to embers, and it cast an eerie red glow over my campsite. And something was different. I heard something in the night. I was no longer alone. Not knowing if it was a human or an animal that had approached in the night, I looked around. And it seemed to me the scenery had changed. I could swear I was surrounded not by the scrubland that I saw when the sun set, but by an olive grove. And not too far away was a man kneeling as though in earnest prayer.

Prayer or not, I knew he shouldn’t be there. And so before he could attack me, I wiped the sleep from my eyes and silently made my way in his direction. He neither saw nor heard me before I pounced. And yet somehow he was ready. I tried quickly to pin him, but instead he reversed the situation and pinned me. Though I escaped defeat, I didn’t escape his grasp. But then neither could he escape mine.

I kept demanding to know who he was, but he ignored my demands. His face was covered when I pounced on him, and though I tried to contort myself to see it now, it was hidden from me. The part of him that was exposed to me, however, was wet with perspiration, and in the red glow of my dying campfire, it looked for all the world like he was covered not with sweat, but in drops of blood.

I don’t know how long the struggle went on, but at some point something important occurred to me. My second wife, Rachel, had stolen her father’s household gods when we sneaked out of Haran. When he pursued us, he demanded we give them back, but I didn’t know she’d taken them, and only discovered them later. Was I now struggling with one of those gods? His strength seemed beyond human, and the way he appeared in the night was also supernatural. In my sleepiness I did not think first. I just acted. But now I realized what I was struggling with. I demanded all the more insistently to know who he was, because day was breaking and I feared the spell would be broken when the sun rose.

He then showed me his real strength. He wrenched my hip from its socket and the pain was agonizing. I screamed, but I did not let go. Then he finally spoke. “Let me go before sunrise!” he demanded. And I thought he was afraid.

Still thinking he was a god, I said, “I won’t let you go unless you give me a blessing!”

He spoke again. And I realized that though we spoke the same language, he spoke it strangely, as though he were from a distant place. “What is your name?” he asked me. And before I could think about the wisdom of answering or not answering, I told him.

“Not anymore,” he replied, “for I call you Israël: you have wrestled with God and with mortals, and you have not been defeated.” Not “with a god,” mind you, and not “with gods,” but he’d said “with God.”

I hung on physically, but mentally I was weakened. “Please tell me your name,” I begged.

He answered with a question: “If you do not know the Name, why do you now ask it?” And he blessed me then and there. And his blessing was the blessing I’d tricked out of my father, the prophecy my mother had heard when she was pregnant, the promise made to my grandfather that caused him to move to the land of Canaan in the first place. It was an ancient blessing, and yet it was meant just for me, Jacob the grasper of heels, Israël the wrestler of God.

I saw him then in the shadows. I saw the face of the one with whom I’d been wrestling. It was a face like mine and it was somehow at the same time the face of my brother. It was all faces, all pain, and all blessing. It had been the victim of all the world’s evils, and yet it believed in all goodness. It was death, and it was life. It was the face of God and yet it was human. I realized then that to see it in the fullness of the morning light would be too much. And so I finally let go.

As the sun rose I looked around and saw once again the wilderness of the Jabbok valley. There was no sign of olive trees or any other human cultivation. Perhaps I’d imagined that part of the story. Perhaps I’d imagined the whole thing. But one thing I knew: I need not fear my brother’s anger, for my struggle was not with him, but with God. What could Esau do to me if God had future plans that involved me?

And so I called the place where I’d slept that night Peniel, which in my language means Face-of-God, for it was there that I’d seen God’s face and lived.

In the end, I crossed the waters of the Jabbok, and neither they nor my brother took my life. Time had healed the wound I had inflicted on him. Though he’d sold his birthright to me for a bowl of soup, and though I’d tricked my father out of the blessing intended for him, Esau had prospered. He had all he’d ever wanted and more, for his tastes always had been uncomplicated.